Construction of a mine headframe has begun at the Podolsk deposit 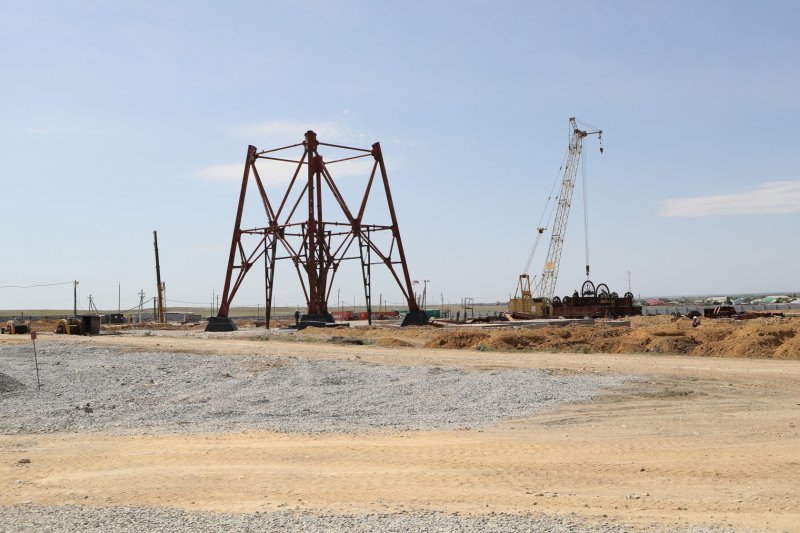 At the Podolsk deposit, the reserves of which will be developed by OOO Bashkirskaya Med (an enterprise of the UGMK raw materials complex), the construction of the Vostochnaya Ventilatsionnaya mine is underway. At present, a mine headframe with a height of more than 30 meters is being erected, an unloading machine is being installed, winches and buildings for lifting machines are being built. Administrative and amenity complexes are being constructed on the territory of the deposit.

The general contractor of the project PJSC Gaysky GOK (an enterprise of the UMMC raw materials complex) began the initial stage of construction of one of the mine shafts in August 2019. On the fenced area of ​​the Vostochnaya Ventilatsionnaya mine site, the soil and vegetation layer was removed, temporary roads were dumped and preparatory work was carried out for the construction of the shaft: a pit was dug under the base of the headframe, concrete preparation was made, a shaft formwork with a diameter of 6.5 m was set up, a reinforcement cage was assembled and installed the outer ring of the formwork for receiving concrete, after which the shaft sinking (technical withdrawal) with a depth of about forty meters began. At the initial stage, temporary structures were also built: a concrete-mixing unit, a fire-fighting pumping station, tanks for temporary storage of fuels and lubricants.

In the future, the Vostochnaya Ventilatsionnaya mine will become part of an underground mine. In the future, according to the project, it is necessary to build two inclined shafts and one vertical, which will reveal the reserves of the deposit.

Recall that the first brick in the construction of the new mine was laid by the Head of the Republic of Bashkortostan Radiy Khabirov and General Director of UMMC Andrey Kozitsyn. In terms of production volumes, the Podolskoye field will become one of the largest in the country and will be included in the top three key objects of the UMMC raw materials base. The explored reserves of the deposit are estimated at 88.6 million tons of ore.

Финансовая аналитика, прогнозы цен на сталь, железную руду, уголь и другие сырьевые товары. More news and analytics on Metallurgprom telegram channel - subscribe to get up-to-date market information and price forecasts faster than others.
Сomments
Добавить комментарий
Комментарии (0)
On this topic
Gaiskiy GOK has started construction of a mine shaft on East Podolsk Deposit
Mandrivnik Spodin Igor
Gaiskiy GOK continues construction at the Podolskoye deposit
Rental of formwork in St. Petersburg
The first mine hoist produced by Uralmashplant is being installed at the Gaysky GOK
Development of one of the largest deposits in Russia starts in the Republic of Bashkortostan
News Analytics
China's iron ore output to rise in 2023 as new projects are launched30-11-2022, 18:10
"Centravis" agreed to supply a new batch of seamless pipes to a30-11-2022, 16:51
Metinvest enterprises in Ukraine resumed work after massive shelling of29-11-2022, 11:59
The European Council added the violation of restrictive measures (sanctions) to28-11-2022, 14:22
The abolition of export duty in India may reduce the price of Turkish steel28-11-2022, 14:07
Commodity prices will fall, metals quotes will rise slightly - Focus Economics28-11-2022, 13:28
Platinum market to face shortage next year - WPIC22-11-2022, 18:25
Global steel demand falls and will fall by 2.3% in 2022: WorldSteel19-10-2022, 23:12
Iron ore prices fall to 11-month low15-10-2022, 10:36
China production cuts in winter will give limited boost to steel markets -15-09-2022, 10:09
Sign in with: