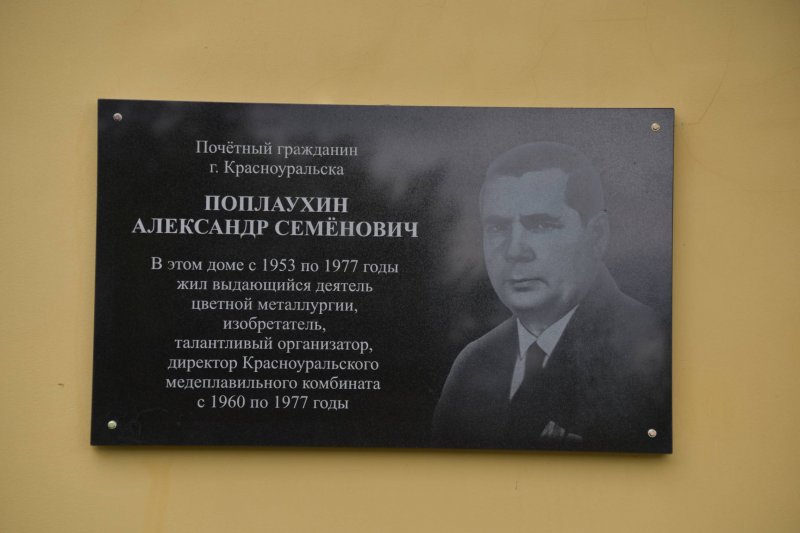 In Krasnouralsk, with the support of Svyatogor JSC (enterprises of the UMMC metallurgical complex), a solemn opening of a memorial plaque took place in memory of the former director of the Krasnouralsk Copper Smelting Plant (now Svyatogor JSC) Alexander Poplaukhin.

The place of perpetuation of the memory of this man was house number 6 on Ustinov Street. It was here in the distant 70s that the legendary head of the KMK, Honorary Resident of the city of Krasnouralsk, Alexander Semenovich Poplaukhin, lived. And tens of years later, the first persons of the city and "Svyatogor", representatives of the public, veterans of the plant, and journalists gathered at this house. All of them took part in a significant event - the opening of a commemorative plaque.

- He's like alive, our Alexander Semenovich, - said the director of JSC "Svyatogor" Dmitry Tropnikov. - And now from this board he will be watching us. And we, in turn, will try to be worthy successors of his glorious deeds.

Alexander Poplaukhin headed KMK for 17 years. He is the only director in the history of the enterprise who began his career at the Krasnouralsk Combine (in 1942) as an electrician. In March 1960, Alexander Semenovich was appointed director of the KMK and worked in this post until 1977. This period is called the "Poplaukhin era". And this comparison is not accidental - Alexander Semyonovich, as director, made a significant contribution to the establishment and development of the Krasnouralsk plant.

The memorial plaque on the house where Alexander Semenovich lived is not the only sign of respect from former colleagues and fellow countrymen: On July 15, 2010, on the eve of Metallurgist Day, a monument to Alexander Poplaukhin was unveiled at Svyatogor near the central entrance. In March 2012, in Krasnouralsk, among the senior pupils of city schools, the first research competition was held for the prize named after the former director of KMK - OJSC "Svyatogor" Alexander Poplaukhin. This is a joint project of the city education department and the city-forming enterprise.

In addition, one of the streets of Krasnouralsk bears the name of the former director of the city-forming enterprise Alexander Semenovich Poplaukhin.