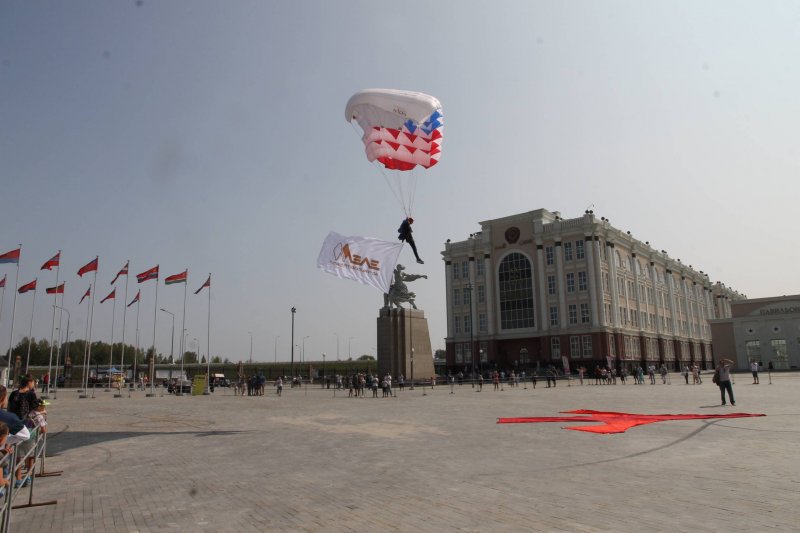 Young guests of the "Wings of the Motherland" holiday, dedicated to the Day of the Air Force of the Russian Federation, found out whose paper airplane would fly further.

The best pilot was presented with a prize on which the athletes-skydivers of the DOSAAF club left their autographs.

A landing party with the flags of Russia, Verkhnyaya Pyshma, the Sverdlovsk Region and the Air Force landed on the site in front of the Wings of Victory Aviation Museum ". The guests of the holiday were also congratulated by the artists of the Song and Dance Ensemble of the Central Military District. Their performance was organized in the back of a historic front-line truck ZIS-5.

Interested parties could get acquainted with the special equipment that serves military aircraft and helicopters of the Koltsovo airbase - these are fuel tankers, airfield launchers and fire trucks.

An exhibition of equipment and equipment of the search and rescue services of the Federal Air Transport Agency and the Chelyabinsk Aviation Regiment of the Central Military District is located nearby. The guests were shown an inflatable raft, which in an emergency splashdown can save the crew's life. Protective helmets for pilots were very popular.

Your personal ZSh with a unique war paint The director of the UMMC Museum Complex, Lieutenant General of the Reserve Victor Sevostyanov, also demonstrated.

“This year in our Museum Complex we call aviation. In May, the Wings of Victory aviation museum was opened, where aircraft from the times of the Great Patriotic War are collected. To celebrate the Air Force Day, we completed the assembly of two unique Soviet aircraft from the beginning of the jet era in aviation - the MiG-15UTI fighter and the M-4 strategic bomber. By the end of the year, we will receive several more jet aircraft. The aviation component is growing as never before! " - says the director of the UMMC Museum Complex Victor Sevostyanov

The restorers have completed the assembly of two new exhibits directly related to the history of military aviation of the USSR, on the eve of the holiday. In the open area you can see the first subsonic jet strategic bomber M-4, nicknamed "Bison" in the armies of NATO member states. It was created at the Myasishchev Design Bureau in the early 50s of the last century to deliver a hydrogen bomb to the territory of a potential enemy. A MiG-15UTI fighter was placed next to the Bizon. It was on such an airplane that pilot-cosmonaut Yuri Gagarin and his instructor Vladimir Seregin left on their last flight. On the fuselage of the new exhibit is the autograph of the military pilot Yevgeny Pepelyaev. In the skies over Korea, he shot down two dozen enemy aircraft.

One of the museum photo zone was organized just at the new exhibit. Visitors could look into the cockpit of the fighter and take a souvenir photo in the pilot's helmet.

A field kitchen and a mobile bakery worked on the festive site, where everyone could taste freshly baked soldier's bread and buckwheat porridge with meat.

In a nearby pavilion, young people of military age could qualify for contract service.

Финансовая аналитика, прогнозы цен на сталь, железную руду, уголь и другие сырьевые товары. More news and analytics on Metallurgprom telegram channel - subscribe to get up-to-date market information and price forecasts faster than others.
Сomments
Добавить комментарий
Комментарии (0)
On this topic
Parachutists, aerobatics and hundreds of balloons: the Russian Air Force Day was celebrated at the
The eternal flame from the factory furnace, Victory Waltz, Procession of military equipment and a
The largest Russian tricolor landed at the UMMC Museum Complex
Minute of silence, Fate of a soldier, procession of historical military equipment, planes in the
Parachutists will appear in the sky over Verkhnyaya Pyshma
In Verkhnyaya Pyshma, the Tanker's Day was held under the roar of engines of armored vehicles and
News Analytics
Tata Steel merger plan to secure long-term profits03-10-2022, 10:46
US hydrogen prices to drop to zero dollars per kg in 5 to 6 years: Platts02-10-2022, 21:53
The production of passenger cars in Russia decreased by 2.8 times in eight29-09-2022, 11:19
Donetsk and Torez electrotechnical plants will start producing electrical29-09-2022, 11:37
Ukrainian coking plants reduced gross coke production by 55.2%29-09-2022, 11:28
China production cuts in winter will give limited boost to steel markets -15-09-2022, 10:09
Steel prices may rise as manufacturers stop production11-09-2022, 14:06
IREPAS: The global long products market is in a "dramatic situation"10-09-2022, 20:49
Steel prices are unlikely to rise significantly in the near future - analysts02-09-2022, 22:58
Steel prices may move up on new data from China31-08-2022, 12:19
Sign in with: