Flying boat has wings in the UMMC museum complex 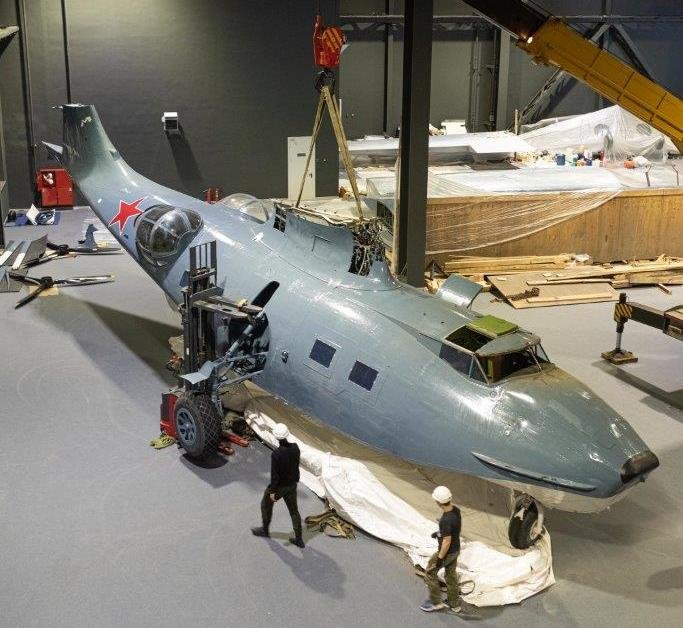 The American Catalina seaplane, which was supplied to the Soviet Union under Lend-Lease, will become the largest exhibit at the new Wings of Victory exhibition center of the UMMC museum complex. The new equipment was brought to Russia disassembled and is now assembling its main elements. The most difficult process is the installation of the wings, the span of which exceeds 30 meters. A powerful crane was used to hang the planes. In terms of its dimensions, the transport seaplane has bypassed other exhibits of the Wings of Victory exhibition center, which is planned to be opened for Victory Day.

PBY "Catalia" - 19-meter naval aircraft from the Second World War. Named after the island resort of Santa Catalina off the coast of California. Serial production of this aircraft in the USA and Canada began in the 30s. Before the start of the war, a small batch of these machines was also produced in the USSR under license, but the Soviet Navy received most of the Katalin under Lend-Lease. From 1944 to 1945 137 American seaplanes entered the Soviet Union. They were used to locate enemy submarines, in search and rescue operations and to transport goods. “In terms of its flight characteristics and, especially, in terms of onboard radio and instrument equipment, the Catalina was the most modern seaplane in Soviet naval aviation,” says Ivan Silchenko, a researcher at the UMMC museum complex.

Flying boats were in service with the USSR Navy until 1956. They were subsequently written off and disassembled. The seaplane delivered to Verkhnyaya Pyshma is the only Catalina in the whole of Russia. You won't see it in any national museum today.

A separate exhibition center has been built for historical aircraft on the territory of the UMMC museum complex. It will be opened for Victory Day. “Private museums in Russia have never presented anything like this to their guests. Four dozen Soviet and American planes from the Second World War, the very planes that made it possible to defeat Nazi Germany, will be assembled under one roof, ”says Viktor Sevostyanov, director of the UMMC museum complex.

On this topic
In Verkhnyaya Pyshma, the Tanker's Day was held under the roar of engines of armored vehicles and
June 24, Verkhnyaya Pyshma: Alley of heroes, the dress-up calculation, the Fate of the soldier and
Beam crane "Demag "
The eternal flame from the factory furnace, Victory Waltz, Procession of military equipment and a
May 9 in Verkhnyaya Pyshma: Eternal flame from the factory oven, Victory Waltz, Procession of
Regional aircraft L-410 celebrates its 50th anniversary
Добавить комментарий
Комментарии (0)
News Analytics
Ukraine and the United States are deepening cooperation in the trade and20-04-2021, 20:46
Nikopol pipe plant "Centravis" is approved as a supplier of the Chinese20-04-2021, 20:10
The capacity of the domestic steel market in Ukraine in January-March decreased19-04-2021, 10:33
In Russia, there is an exuberant demand for agricultural machinery19-04-2021, 10:24
Iran is satisfied with the reaction of the world community to 60% enrichment of18-04-2021, 13:24
World Steel Association predicts a good year for metallurgists15-04-2021, 18:19
World Steel Association defines green steel and its variations12-04-2021, 13:14
China unlikely to cut steel capacity in 2021 due to high steel prices07-04-2021, 12:11
Scrap metal market at the beginning of April02-04-2021, 11:10
Rising Chinese Prices Fueled Rising Global Steel Prices - MEPS25-03-2021, 18:54
Sign in with: