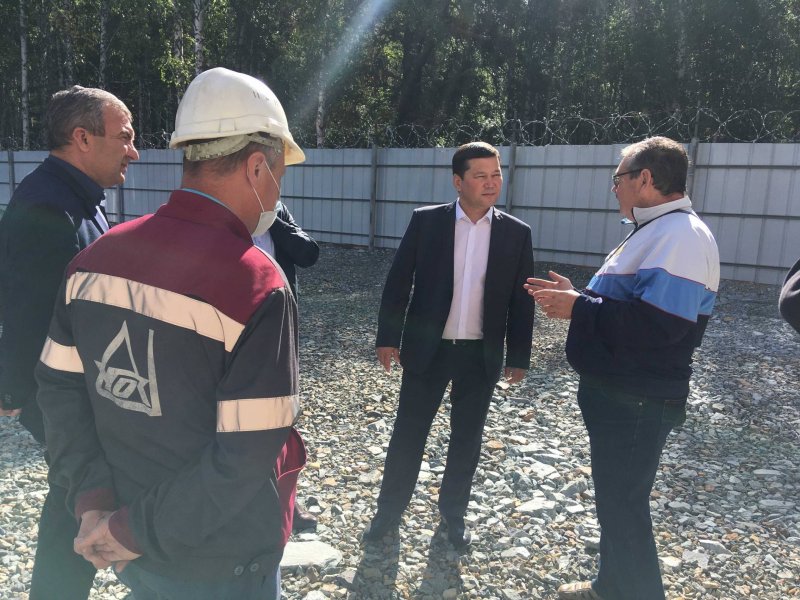 As part of its charitable activities, JSC "Uchalinsky GOK" (an enterprise of the raw materials complex of UMMC) in the microdistrict "Rudnik" in the city of Uchaly built an additional branch of the water pipeline, looping its dead-end sections, and installed a new water tower. The work was carried out on the basis of the appeal of residents, the administration of the State Enterprise of the city of Uchaly and in agreement with the MUE Uchalyvodokanal. The total cost of the modernization of the water supply system amounted to 14.5 million rubles.

"To date, all decisions that have been made to modernize the water supply networks have been implemented by the plant, the positive result of the work carried out was the uninterrupted water supply of the microdistrict," said the deputy Ildar Kildebaev, Director for Capital Construction of JSC Uchalinsky GOK.

The installation of a new water pipeline was carried out by the specialists of the repair and installation department (RMU) of the Uchalinsky GOK on eight streets - in total, about 3.5 km of polyethylene pipes with a diameter of 50 up to 160 mm. The additional branch made it possible to loop the water supply networks of the microdistrict, normalize the pressure in the pipes and ensure a stable water supply to consumers.

“We started construction at the end of April, and worked on weekends when it was necessary. Part of the sections of the route passed on rocky ground - they attracted heavy equipment. As planned, the work was completed, and the water supply system was launched in the first four streets in June, "said Vadim Grishakin, head of the site for the repair and installation of engineering systems of the RMU.

Construction and installation work on laying the networks was carried out without shutting down consumers. Upon completion of the installation of the water supply system, the RMU workers landscaped the territory and proceeded to install a modern water tower next to the existing water supply structure.

“I would like to note that the plant not only installed a new tower, but also fenced off the territory around the perimeter, now access here closed to outsiders. I think that after the reconstruction of the old water tower, we will remove all sore issues with the water supply of the microdistrict, ”stressed Ilmir Gazizov, head of the Uchaly State Enterprise Administration.

The capacity of the new water-pressure steel structure with a height of 25 m is 160 m3 and serves as an addition to the existing tower. This ensures a more even distribution of water during periods of high load on the water supply network. After the new tower was put into operation, the water supply doubled and the water supply interruptions stopped.

"We live on Chekhov Street, we very often did not have water, let alone watering, we could not even start an automatic machine, but this summer there was always water, which we are incredibly happy about!" - Galina Kharisova, a resident of the Rudnik microdistrict, thanked the plant.

In autumn Uchalinsky GOK also plans to reconstruct the old water tower: the tank, the pipeline, the electrical networks will be replaced, the windows will be laid to prevent heat loss. Instead of a wooden structure, an insulated metal frame will be mounted in the upper part of the tower. The work is planned to start after the end of the watering season.

Финансовая аналитика, прогнозы цен на сталь, железную руду, уголь и другие сырьевые товары. More news and analytics on Metallurgprom telegram channel - subscribe to get up-to-date market information and price forecasts faster than others.
Сomments
Добавить комментарий
Комментарии (0)
On this topic
TOTAL FOLIA: REVOLUTION IN METALWORKING
One of the best children's tennis tournaments in the country "UMMC-Open" has started in
NLMK Board of Directors has appointed the Annual Shareholders Meeting for April 19, 2019
Mikhailovsky GOK presented to the head of the Ministry of Natural Resources unique projects for the
NLMK group has attracted a renewable credit line worth 600 million euros
The TMK Board of Directors recommends accepting the voluntary offer of the TMK subsidiary in
News Analytics
Moody's changed the outlook for the global mining industry to26-09-2022, 19:04
Russia may increase taxation of oil, gas, coal and fertilizers26-09-2022, 15:58
UK steel production hits record low this year26-09-2022, 15:07
Ukrainian court invalidated sale of Ferrexpo Plc shares in 200222-09-2022, 12:45
EU Commission not doing enough to save aluminum industry - associations21-09-2022, 11:07
China production cuts in winter will give limited boost to steel markets -15-09-2022, 10:09
Steel prices may rise as manufacturers stop production11-09-2022, 14:06
IREPAS: The global long products market is in a "dramatic situation"10-09-2022, 20:49
Steel prices are unlikely to rise significantly in the near future - analysts02-09-2022, 22:58
Steel prices may move up on new data from China31-08-2022, 12:19
Sign in with: