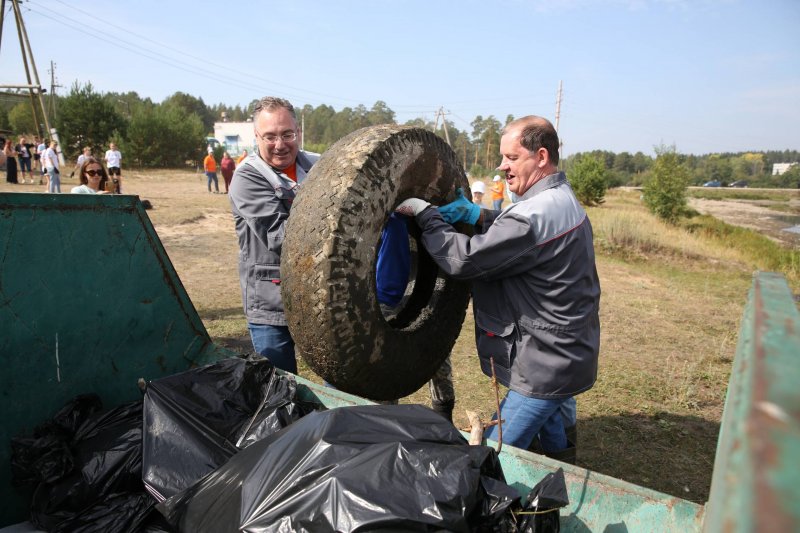 SUMZ (an enterprise of the UMMC metallurgical complex) held a traditional beach cleaning and improvement campaign “Clean Berega” in Revda, this time in cooperation with the Sima-Land company.

On August 18, the coastal strip of the Glubokaya River in Revda was cleared of garbage, and the Topol beach on the Revdinsky pond was not only cleaned up, but also equipped with a recreation area with benches, sun loungers, changing rooms, trash cans and book houses.

More than a hundred people took part in the traditional annual subbotnik as part of the Clean Shores campaign. Among them are SUMZ director Bagir Abdulazizov and the team of the Sredneuralsky copper smelter, Andrey Simanovsky and activists of the Sima-land company, deputy of the regional Legislative Assembly Alexander Serebrennikov, head of the district Irina Teisheva, activists of Revda and the Nika charity foundation.

- Next year there will be an anniversary - 10 years - how we clean the banks of the Revdinsky pond, Chusovaya, exhibit containers. Last year, almost 10 tons of garbage were removed, - said Bagir Abdulazizov. - Let's do everything so that our shores, streets are clean, and recreation areas are good.

- Today we will do another good deed together with the UMMC team, - said the owner of the company "Sima-land" Andrey Simanovsky. - Everyone is in a good mood and, most importantly, to have fun!

The participants were provided with the necessary working equipment. Transport for garbage disposal was provided by the district administration and the company MSW-Ecoservice. The guys from "Sima-Land" made a real holiday out of the subbotnik: the cleaning took place to the accompaniment of cheerful music, and at the end absolutely everyone took part in an impromptu flash mob.

- For me, this is my hometown, my childhood passed on these beaches ... It is with great joy that I always take part in such events, - emphasized Alexander Serebrennikov, deputy of the Legislative Assembly of the region. - The guys from the Nika Foundation also came with me. We have been working with them for over 12 years, I am the head of the Board of Trustees.

After After all the work was completed, a sign was installed on Topoli: "We did it from the bottom of our hearts, please save it!" Then the protesters had an organized lunch and, sitting on new benches, admired the work of their own hands - the clean shores.

- Thanks to SUMZ and Sima-Land for organizing this event. Glubokaya and Poplars are two favorite resting places of the residents of Revda, - said the head of the district Irina Teisheva. - But for some, to love does not mean to cherish. Unfortunately. We are cleaning these territories for the third time this summer, and the garbage remains as it was. I would like to believe that the townspeople will begin to respect other people's work and keep the city clean.

Representatives of regional ministries, departments, public organizations, enterprises, local self-government bodies of the urban district of Revda usually take part in the action "Clean Shores" also common residents. They put in order the popular recreation places among residents of Revda on the beaches "Topol" and "Glubokaya", the banks of the Dark River.