BUSINESS SUPPORT FOR THE DEVELOPMENT OF THE INDUSTRY: Sandvik Coromant became the "Gold Sponsor" of the final of the IX National Championship "Young P 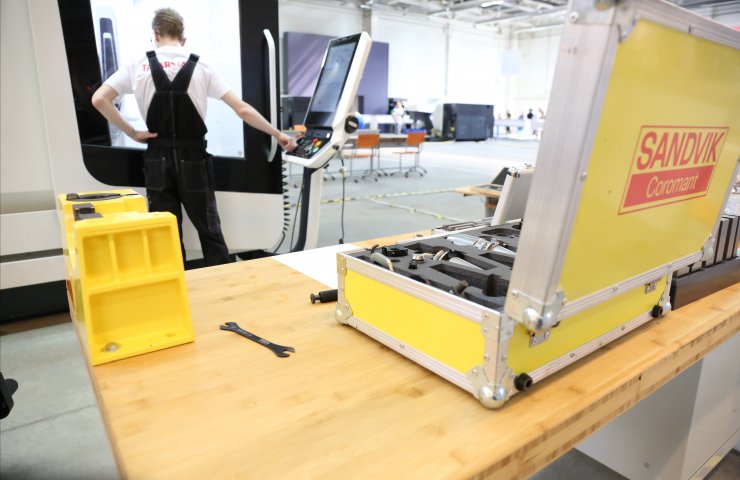 Sandvik Coromant, an expert in the field of cutting tools and tool systems, was the Gold Partner of the final of the national championship "Young Professionals" (WorldSkills Russia), which was held in Ufa on August 25-29.

"Young Professionals" is the largest professional skill competitions in Russia according to WorldSkills standards for students of secondary and higher professional educational institutions aged 16 to 25 years, as well as for schoolchildren under 16 years of age within the framework of the WorldSkills Russia Juniors direction.

Sandvik Coromant provided support to the participants of the turning and milling competencies, providing them with technical advice on the purpose of cutting modes and tool operation during the preparation for the Championship, as well as providing the necessary tools for performing competitive tasks. Also during the competition, the company's specialists were responsible for preparing the contestants ' workplaces and checking the serviceability of the body tool sets, and during the Closing Ceremony they handed out memorable prizes and souvenirs to the winners.

So, this year, in the main competence "Turning work on CNC machines "gold" was awarded to Artem Panferov from the Moscow region, the 2nd place was awarded to Alexey Sevastyanov from the Republic of Tatarstan", and Timofey Sukhorukov from the Sakhalin region took the 3rd place, while Vladislav Shiryaev from the Perm Region became the winner in the competence "Milling work on CNC machines", Yuri Biryukov from the Moscow Region became the silver medalist, and Matvey Mulyar from Moscow took the 3rd place.

Among the juniors in the competence of "Turning on CNC machines", Vyacheslav Boikov from the Leningrad Region took the first place, Ilya Zubkov from Moscow received the silver, and Ilya Komyagin from the Republic of Tatarstan received the bronze. As for the competence "Milling operations on CNC machines", among juniors, "gold" was awarded to two nominees at once-Egor Bystrenin from the Republic of Tatarstan and Dmitry Klokov from St. Petersburg, and Maxim Sedov from Moscow received "silver".

"At the local level, our company has been supporting the WorldSkills movement for many years. This is due to the fact that the shortage of qualified personnel in the industry is particularly acute in Russia, and we, as market leaders, are striving to change this by drawing the attention of the community to topical issues of vocational education and training. Supporting young professionals, transferring their knowledge and experience to them is part of our corporate strategy and the social responsibility that we bear to the market," commented Andrey Pashenko, Sales Director of Sandvik Coromant, aerospace industry sales cluster.