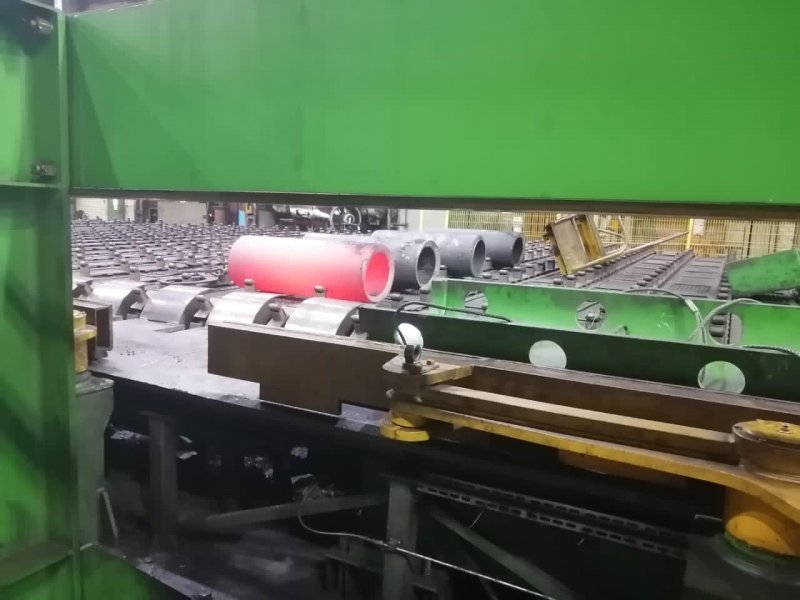 PJSC Uralmashzavod (UZTM) has completed a unique modernization of a horizontal hydraulic press with a force of 3150 tons, which was carried out for PJSC Revdinsky non-ferrous metals processing plant (part of UMMC) ... The technical re-equipment of the equipment installed half a century ago will significantly expand the range of pipes and reduce the labor intensity of the work performed.

A press for the manufacture of pipes from copper and bronze alloys was installed at the enterprise back in 1968. The tasks that UZTM specialists faced were expanding the range of products, inspection and complete (or partial) replacement of worn parts, updating of control systems, automation and improvement of working conditions at the press. Previously, a press equipped with a direct pressing mechanism could produce pipes with a diameter of up to 250 mm, and due to design changes in equipment and the manufacture of special tools, it was necessary to increase this size to 545 mm.

“According to the terms of reference developed by RZOTsM specialists , we made major changes to the "stuffing" of the press, installed modern systems, manufactured a new tool and, most importantly, equipped the equipment with a back-pressing mechanism. Thus, we were able to combine the two in one: usually direct and reverse pressing presses are two different complexes. The equipment has been successfully tested - the quality of the products meets the customer's requirements, ”said Andrey Vyatkin, Deputy Chief Designer of Uralmashzavod.

According to him, during the technical re-equipment, small mechanization was also introduced: those operations that were previously performed manually are now automated.

Финансовая аналитика, прогнозы цен на сталь, железную руду, уголь и другие сырьевые товары. More news and analytics on Metallurgprom telegram channel - subscribe to get up-to-date market information and price forecasts faster than others.
Сomments
Добавить комментарий
Комментарии (0)
On this topic
The first mine hoist produced by Uralmashplant is being installed at the Gaysky GOK
UMMC-OCM becomes the leader of the Russian non-ferrous steel market
UZTM put another one hauling the car to the enterprise of UMMC
Metalloinvest and UZTM-KARTEX signed an agreement on cooperation in the development of Mikhailovsky
UGMK-OCM became a finalist of the "Exporter of the Year" award
The TMK Board of Directors recommends accepting the voluntary offer of the TMK subsidiary in
News Analytics
EBRD downgrades Ukrainian economic growth forecast for 2023 from 25% to 8%28-09-2022, 13:57
EU plans additional sanctions against Russian metallurgy27-09-2022, 10:34
The European Commission has approved 5.2 billion euros of state support for27-09-2022, 10:43
China's leading industrial profits fall 2.1% in first 8 months27-09-2022, 10:20
Moody's changed the outlook for the global mining industry to26-09-2022, 19:04
China production cuts in winter will give limited boost to steel markets -15-09-2022, 10:09
Steel prices may rise as manufacturers stop production11-09-2022, 14:06
IREPAS: The global long products market is in a "dramatic situation"10-09-2022, 20:49
Steel prices are unlikely to rise significantly in the near future - analysts02-09-2022, 22:58
Steel prices may move up on new data from China31-08-2022, 12:19
Sign in with: