A basketball record was set in Yekaterinburg 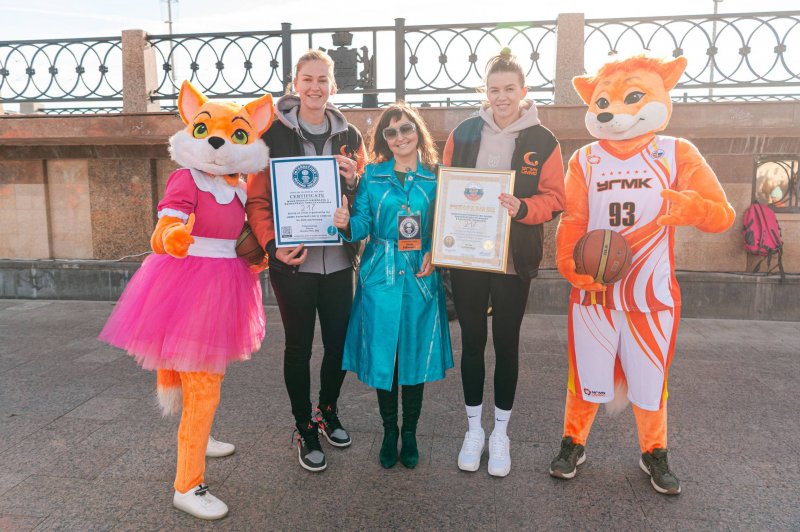 The new basketball season of the "fox" UMMC decided to celebrate the Russian record for the most massive simultaneous basketball dribbling. For this purpose, a representative of the INTERRECORD International Records Registration Agency arrived in Yekaterinburg.

On the eve of the first home match of the UMMC basketball team, 217 basketball fans of all genders and ages gathered on the Iset River embankment. Observing a social distance, the fans lined up with balls in an “orange snake”, the length of which was more than 500 meters, and at the same time started dribbling at the signal.

The “foxes” themselves did not pass by the event.

- Everyone would like to set a record, and I'm glad to be a part of it. I am proud that I can share this joy with children, for whom this may be the first day of basketball in their life. Once we were trying to set a record in my hometown in Belgium, a lot of people gathered. Unfortunately, we failed to set a record then, but everyone had a lot of fun, ”UMMC striker Emma Meesseman shared her emotions after the event.

The attempt in Yekaterinburg was a success, the Russian record for the most massive simultaneous basketball dribbling was recorded in the Register of Records of Russia, as well as in the "International Record Registration Agency INTERRECORD." "From 1958 to 1960," Uralmash "- from 1960 to 2000," Uralmash-UMMC "- from 2000 to 2001). BC UMMC acquired its current name in 2001 and celebrated its 20th anniversary in 2021.

And the UMMC team won its first home match of the 2021-2022 season, defeating guests from the Rostov region at the main arena of the DIVS.

The next match UMMC will play on October 14 in DIVS within the group stage of the Euroleague against the Italian "Venice". The meeting starts at 19:00.

Финансовая аналитика, прогнозы цен на сталь, железную руду, уголь и другие сырьевые товары. More news and analytics on Metallurgprom telegram channel - subscribe to get up-to-date market information and price forecasts faster than others.
Сomments
Добавить комментарий
Комментарии (0)
On this topic
"This is the future of the city": leading experts and citizens discussed the new concept
"UMMC Builder" together with "Green Park" began the transformation of the
Within the framework of the FIBA ​​project "Her World, Her Rules", a master class was
Basketball players from UMMC contributed to the greening of Yekaterinburg
"UMMC-Developer" discussed the future of Kazantsev's garden and
"UMMC-Developer" put into operation the building of the Simanovskaya mill in the
News Analytics
Tesla in the second quarter reduced the supply of cars by 18%04-07-2022, 10:24
Steel prices fall due to weakening European demand and problems in China04-07-2022, 10:40
The United States refused to impose duties on Russian metals and increase02-07-2022, 09:05
Daimler Truck began testing Actros tractor on liquid hydrogen02-07-2022, 08:54
Volvo invests $1.25 billion to build electric vehicle plant in Slovakia01-07-2022, 18:17
High iron ore shortage could halt metallurgy's green transition28-06-2022, 14:02
Price volatility hits global steel market27-06-2022, 19:28
Recovery in China could be key to rising global steel prices - MEPS24-06-2022, 14:00
Conflict in Ukraine spurs Europe's drive for clean energy03-06-2022, 12:14
US steel market sentiment becomes more price neutral05-05-2022, 10:15
Sign in with: