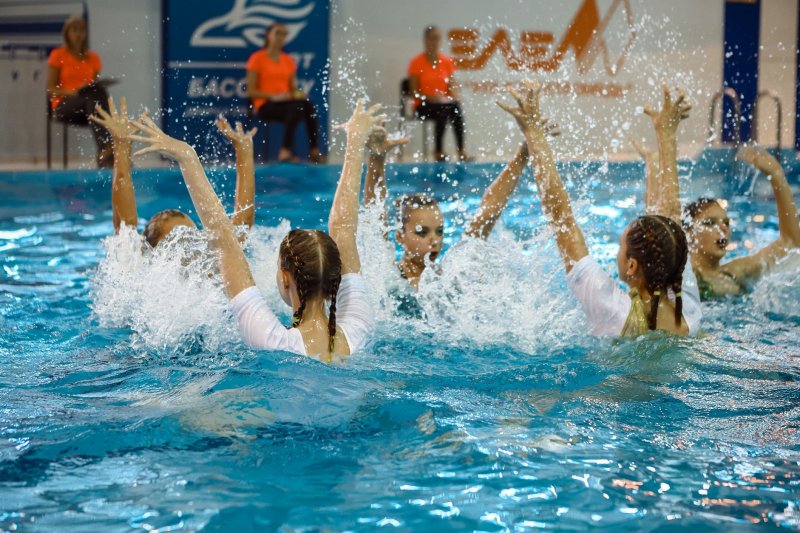 The UMMC Sports Palace hosted a synchronized swimming tournament "Sport as Art" for the prizes of Olympic champion Angelica Timanina. 11 teams from Yekaterinburg took part in the competition, including a team from Verkhnyaya Pyshma, where children of Uralelectromed employees train - a total of 121 participants.

As noted by the President of the Synchronized Swimming Federation of the Sverdlovsk Region Elena Kozitsyna, the tournament was held at a high organizational level. The audience saw vivid performances filled with complex movements, grace and grace. This year, the participants presented sports performances on the theme “Myths and Legends of the Nations of the World.”

The judges evaluated the synchronized swimmers in two age categories - 2009 year of birth. and older, 2009 year of birth and younger. The top pishers were able to reveal the topic more successfully than their rivals, performing synchronous movements on the water. They took first place in the age category born in 2009. and younger (trainer Elena Migunova). The girls presented a sports composition on the theme "The victory of the god Ra over the forces of darkness." In addition, the top pimples became winners in the nomination "For the best image". The second place was taken by the sportswomen of the Sports School No. 19 (Yekaterinburg, coach Yekaterina Finogenova), the third place was also taken by the Sports School No. 19 (coach Alexandra Donchenko).

In the age category of 2009 and older, the best synchronized swimmers of the Children's and Youth Sports School No. 19 (coach Tatyana Aborneva) with the composition "The Legend of Medusa Gorgon" were recognized. The second place went to the team of the synchronized swimming school "Flamingo" (Yekaterinburg, coach Daria Kazachinskaya), the third place was taken by the team of the sports club "Novoselov Tim" (Yekaterinburg, coach Varvara Bannikova).

The winners and prize-winners were awarded medals and commemorative present. The prize in the nomination "For the best suit" was received by the team of the Children's and Youth Sports School No. 19 (Yekaterinburg).

Recall that the organizers of the tournament were the Department of Physical Culture, Sports and Youth Policy of the Verkhnyaya Pyshma GO, the Synchronized Swimming Federation of the Verkhnyaya Pyshma , UMMC Sports Palace, Sverdlovsk Regional PA "Synchronized Swimming Federation". The tournament is being held for the ninth time in honor of the 2012 Olympic champion, 11-time world champion, Honored Master of Sports of Russia Angelica Timanina.

Note that the pool of the UMMC DS receives over a thousand visitors. It is incredibly popular among residents of the urban district of Verkhnyaya Pyshma and adjacent towns, among employees of JSC Uralelectromed. Visitors love it because it is always comfortable there. Small and large bowls are only part of the potential of this object. At the disposal of adherents of a healthy lifestyle, there is a choreography hall and a restorative gymnastics hall.