From metal buttons to the futuristic exoskeleton of the American military, which came to the real world from the pages of popular comics. From the iron brigandines of medieval dandies to modern fire-resistant clothing for work on main pipelines and in hot workshops. 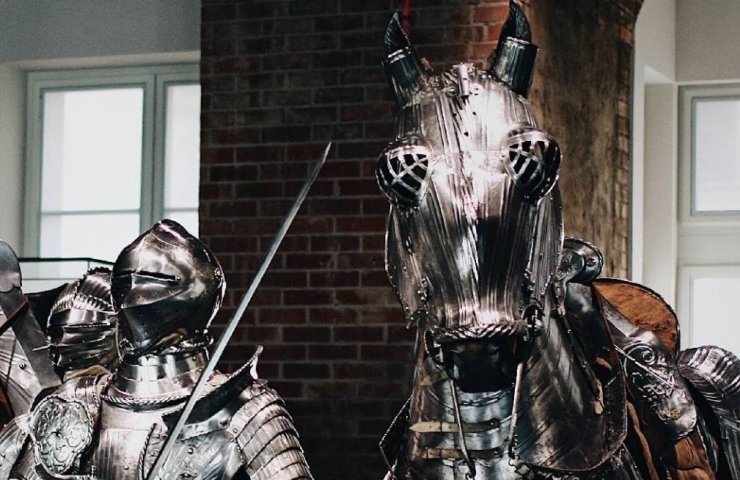 The steel suit has come a long evolutionary path, and after a temporary retreat in front of a deadly "firearm", it again conquers the battlefields and is widely used in the latest industries.

The ancestors of skins and cotton wool

The first armor of mankind covered ... the backs of warriors. For the Germanic tribes who stormed the Roman Empire, it was not considered shameful to escape from the battlefield. They protected the chest by dodging. But the back, vulnerable when fleeing, was covered with thick animal skins, throwing them over the shoulders. The servicemen of ancient Egypt and Greece wore multi-layer glued and quilted clothes as military armor. The Mexican Aztecs greeted the Spaniards in quilted wadded coats a couple of fingers thick. In turn, the Spanish conquistadors borrowed the idea from the Mexicans. And in medieval Europe, similar protective clothing was used more than widely, until the 16th century. By the way, the famous Caucasian cloak also turns out to be armor. The burka made of wool using felting technology is invulnerable to steel sabers, arrows and even some types of bullets.

Another ancient idea of ​​protective clothing was borrowed from animals. The scaly skin of one of them - pangolin - was widely used as armor by Indian noble warriors - the Rajputs. They began to imitate the scaly body cover made of copper in ancient Mesopotamia. Then bronze went into action, followed by steel. It was steel scale armor, simple to manufacture and very durable, that was most popular among the warriors of the East and West. To make the scales, it was required to forge small steel plates that were attached with an overlap. Due to its small size, the steel scales did not break, it was impossible to cut or pierce it.

Note that not all armor was made of steel. For example, the equally common "chain mail" and "brigandina" were made, as a rule, of iron. Chain armor is believed to have been invented by the Celts. The two oldest examples of chain mail in the world have been found in neighboring Romania and date back to the 3rd century. BC e. At first, the style of mail armor most of all resembled a long T-shirt with short sleeves. Later the sleeves became long, the "T-shirt" was supplemented with chain mail stockings and a hood. Now the chain mail completely covered the body and was called hauberka.

Chainmail armor was made using a wire drawing device. The wire was chopped into rings. They, in turn, were riveted, and later welded. But experts still argue about the degree of protection of chain mail. The fact is that the wire can only be drawn from relatively soft and ductile iron. Therefore, the chain mail was easily pressed and pierced. In a battle with an enemy armed with a mace or sword, she was simply useless. However, from the Celts to the early 17th century. iron chain armor was the main element of a warrior's outfit in Europe, and in Asia they were used until the 19th century ..

Brigandina is a kind of "two in one". This armor served as both a secular dress and protection from attack. The brigandine's iron plates were attached to fabric or leather, and from above were trimmed with velvet or silk. By the end of the 12th century, the brigandine "acquired" sleeves and became shorter. With lacing in the front or fasteners on the sides, with a belt that tightly tightens the waist, with copper ornaments attached to a metal frame, the brigandine was a wild success among the commoners and the nobility. But it was gradually replaced by another fashionable novelty - armor.

Plate armor was undoubtedly the finest examples of medieval metallurgical art. The armor required a relatively large amount of steel and was rather difficult to manufacture. Their mass production was established only in the middle of the XIV century.

The armor guaranteed its owner full protection. The "Achilles heel" of this armor was only the slits for the eyes and armpits. These were knights' clothes, which were made to order for a lot of money. One set could buy an entire village.

Interestingly, contrary to popular belief, medieval armor was neither critically heavy nor critically uncomfortable. Indeed, their weight was about three dozen kilograms. But it was more or less evenly distributed throughout the body, and knightly fights were mainly equestrian. An interesting fact - the equipment of a modern infantryman weighs about the same. Therefore, it is not surprising that in plate armor one can not only walk, but also run, fight with swords and even climb a rope ladder, which has been repeatedly proven by reenactors today. And if a noble knight in armor fell, he could easily rise on his own, and did not lie on the ground like a beetle, waiting for the help of the faithful Sancho Panza.

Wounded in battle is another matter. Sometimes even the most insignificant, but bleeding wound of a warrior in armor became fatal.

Recommended:
Flat steel prices soar in the US
Interpipe NTRP has repaired ring furnaces in tube shops
The Chinese company will build a new sinter plant in Krivoy Rog
On this topic
Where to order a selling text on a website in 2020
On the border of Turkey and Greece, clashes of migrants from the border
The transition to a carbon-free economy is actually not as expensive as they say - the experts
The world meteorological organization announced a new climate reality
How steel helped usher in the rock and roll era
Steel Musel is crucial in the production of champagne
Add a comment
Сomments (0)
News Analytics
KZhRK miners' strike threatens with loss of sales markets without prospects of16-09-2020, 21:51
Privatization of the alcohol industry has started in Ukraine16-09-2020, 14:56
The head of KZHRK ordered preparations for the conservation of all four mines16-09-2020, 13:40
Toyota and Dentsu team up to improve marketing strategy16-09-2020, 10:16
Iron ore prices to surpass six-year high soon16-09-2020, 10:32
Iron ore prices to surpass six-year high soon16-09-2020, 10:32
World Oil Demand Peak May Be Over - BP15-09-2020, 09:05
China expands car market capacity by increasing demand for steel and metals11-09-2020, 10:56
Prices continue to rise in the long and flat steel markets08-09-2020, 14:25
Difference between ferrous and non-ferrous metal28-08-2020, 13:45
Sign in with: