Natural gas in metallurgy: from ore and coke to rolled steel

In a metallurgical kitchen, just like in a conventional kitchen, there is one very important auxiliary component - natural gas, without which it would be difficult to implement some stages of steel production and secondary processes. 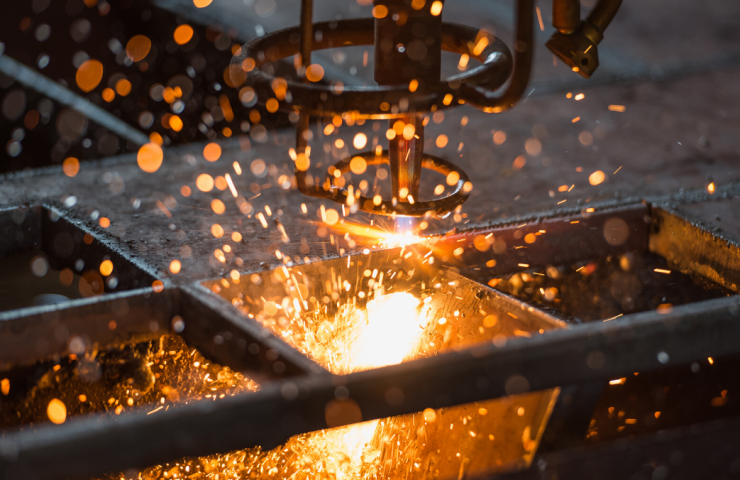 So, in 2015-2017, the largest in Europe Avdiivka coke plant of Metinvest Group several times found itself on the verge of stopping. Due to the fierce battles that were fought in the Donbass, the enterprise remained de-energized more than 10 times. The production of coke was stopped, and the formation of coke oven gas, which is actually a by-product, stopped. Why was this important, especially in winter?

The fact is that coke oven gas is burned to heat coke oven batteries. These are huge structures made of special refractory bricks, in which coal coking takes place. If the ovens cool, the brick walls will crack and the ovens will not be able to work. Building a new battery is an investment of hundreds of millions of dollars. Then the Avdiivka Coke Plant was saved thanks to natural gas. This expensive fuel was burned to heat the furnaces and prevent irreversible damage. "[We need] about 18,000 cubic meters [of natural gas] per hour in order to preserve the city of Avdeevka and AKHZ and prevent a humanitarian and environmental catastrophe, " Musa Magomedov, who then headed enterprise.

Fortunately, that difficult period is over, and now natural gas in Ukrainian metallurgy is used only within the framework of technology.

Natural gas, which consists almost entirely of methane, is one of the most important fuels, hydrocarbons. Auto-ignition temperature is 650 ° С, and combustion temperature in oxygen reaches 2100-2020 ° С.

For domestic purposes, it is used to heat houses, heat water, and use it in most kitchens in gas stoves and ovens. On an industrial scale, it is used for the production of mineral fertilizers and plastics, for the generation of electricity and heat in thermal power plants and power plants. And, as we have already found out, in the mining and metallurgical complex.

Why do you need gas for ore production? It would seem, just dig deeper, cut the rock, extract iron ore and lift it to the surface along a conveyor belt. The scheme works in such a simplified format only up to a certain point: until you have to think about the practical use of the extracted mineral. At this point, it turns out that the ore from the iron ore quarry or mine is unsuitable for further use in blast furnaces or steel furnaces. There is practically no rich iron ore left in the whole world.

The extracted material must be enriched (increased iron content), crushed to the desired fraction size and prepared for remelting. There are two main types of prepared iron ore raw materials (IRR) used in Ukrainian metallurgy: sinter and pellets.

But such raw materials have a number of disadvantages, primarily related to transportation. Agglomerate is a very fragile material. If it is produced at mining and processing plants, then during long-term transportation it crumbles. Therefore, almost all Ukrainian sinter plants have been erected on the territory of metallurgical plants. On the other hand, transportation of iron ore concentrate and other raw materials from miners to metallurgists is also very costly, including due to the loss of a part of the product during transportation.

Back in the early twentieth century, a scheme for solving this issue was proposed, which became widespread in the second half of the century. This is the production of pellets. Pelletizing and roasting equipment is installed directly at the GOKs, in which hard and durable balls with an iron content of 63-68% are obtained from the charge. They can be transported over long distances without loss of quality. This simplifies the export of iron ore. But the consumption of pellets within Ukraine is also growing, although for this raw material it is necessary to modernize blast furnaces.

Natural gas or other fuels are also used in the production of pellets. In pelletizing machines, the batch is spherical. The resulting balls are dried and then fired (baked) at a temperature of 1200-1300 ° C.

At the end of the twentieth century, inventors went even further. The technology of direct reduction or hot briquetting has appeared in metallurgy. In this case, almost pure iron is produced. Its content in the briquette exceeds 90%. In fact, the material is a substitute for cast iron and scrap metal.

The most widespread direct reduction technologies practically do not use solid fuels - only gas. Briquetting is carried out at a temperature of about 700 ° C. There are several patented

Recommended:
Mazda will cut car production by 7,000 units in February due to chip shortages
PJSC PIMCU im. E.P. Slavsky "increases the volume of mine workings at the operating mines
CEO resigned from Interpipe
On this topic
How Tesla became the world's most valuable automaker
What technologies help robots to become human?
Yuzhmash told whether it is possible to launch reusable rockets from the Black Sea
How the reform of the electricity market in Ukraine can lead to a collapse and what to do about it
Stopped nuclear power plants and mines. What's going on in the energy sector of Ukraine?
Long road to green steel
Add a comment
Сomments (0)
News Analytics
Ministry of Commerce: China intends to strengthen trade and economic ties with24-02-2021, 18:49
Vostochny GOK in 2020 increased the production of uranium concentrate by 7%24-02-2021, 18:58
For the first time in Ukraine, recirculators and irradiators for air24-02-2021, 18:37
Novokramatorsk Machine-Building Plant keeps sales and production at the level24-02-2021, 17:53
The English court rejected the claims of the Russian "Tatneft" against24-02-2021, 17:42
Global iron ore production growth to outstrip cumulative production in India23-02-2021, 10:22
Fitch Ratings Warns of “Shocking Impact” on Fossil Fuel Exporters18-02-2021, 14:44
Raw material prices rise by about 10.5% in January 2021 - Deutsche Industriebank12-02-2021, 10:48
JP Morgan Analysts Announce New Super Growth Cycle in Commodities11-02-2021, 17:56
S&P Global Platts predicts first drop in domestic steel demand in China in 510-02-2021, 12:26
Sign in with: