Scope of application of VVGng (A) 4x25 cable

The normal operating temperature range is -50 to +50 degrees ambient. But, the protective insulating shells themselves can withstand overheating up to +160 degrees for a short time without any physical damage. 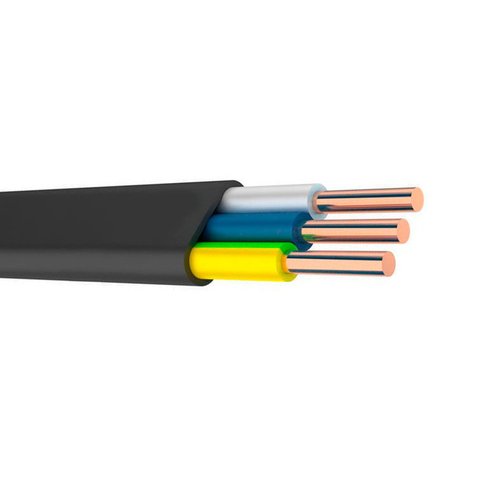 Power, sheathed four-core copper cable is widely used for three-phase electrical networks. A high degree of protection against negative operating factors increases its popularity. Cable VVGng (A) 4x25 strong enough that it can be laid not only in special mines, but also by air. Made from pure first grade copper, it has minimal internal resistance.

Each core of the cable has seven separate copper wires. Interlaced with each other, they additionally increase the resistance of the cable to various types of mechanical stress. In addition, the wire structure also consists of other parts. The most important ones should be added:

Important: the zero core has the color difference of the PVC sheath. Blue color allows electricians to avoid confusion during the connection process. This feature of the VVGng (A) 4x25 cable is appreciated by consumers, as it simplifies operation and reconnection if necessary.

The outer sheath of an industrial wire has an additional component that prevents it from burning when the operating temperature rises. Even in the event of a short circuit, the automation will have enough time to operate so that there is no fire source for the polymer sheath of the cable. The main areas of application of the cable include:

The normal operating temperature range is -50 to +50 degrees ambient. But, the protective insulating shells themselves can withstand overheating up to +160 degrees for a short time without any physical damage. The VVGng (A) 4x25 cable is quite versatile, does not need maintenance after proper installation. It can be reused if the protective shell has not been damaged during operation.