Introduced the first ever steel that kills 99.9% of the Covid-19 virus in a few hours

The new stainless steel alloy with the addition of copper not only deactivates all known strains of coronavirus, but also kills bacteria such as E. coli and the H1N1 influenza virus 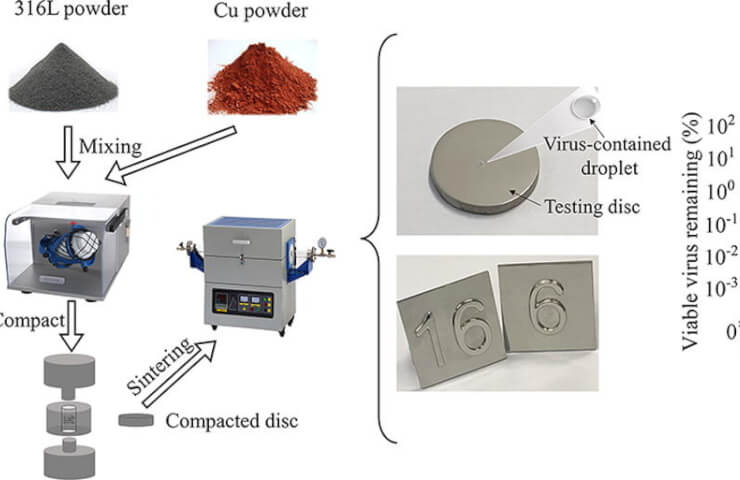 Researchers in Hong Kong said they have developed the world's first stainless steel that kills the Covid-19 virus in a matter of hours. The new alloy can inactivate 99.75% of the SARS-CoV-2 virus within three hours and 99.99% within six hours, according to study published by a group of researchers from the University of Hong Kong.

Scientists led by Huang Mingxin from the Mechanical Engineering Department and Leo Poong from the Center for Immunity and Infection have proposed their developments to industrial partners to test this material in steel products such as lift buttons, doorknobs and handrails, and other surfaces. most often touched in public places.

The innovation - if it proves to be efficient and cheaply scalable - will significantly reduce the cost of regularly disinfecting public transport locations such as airports and train stations, as well as other crowded areas such as cinemas and sports stadiums.

As fears of a pandemic return to the masses following the recently identified omicron strain, a new stainless steel alloy could potentially help people get back to normal after the turmoil of the past two years.

A published study states that the antimicrobial properties of the alloy are retained for a long time, even if it is constantly damaged during use. And it can be produced using existing "powder metallurgy" technology while keeping costs low.

Under normal circumstances, the virus that causes Covid can remain active on a metal surface for more than two days.

A new alloy that adds copper to stainless steel can also protect against other disease-causing microbes. The scientists noted that "stainless steel, which protects against pathogens, also shows excellent inactivation ability" of the H1N1 influenza virus and Escherichia coli bacteria.

To date, the coronavirus pandemic has affected more than 266 million people worldwide and killed over 5.2 million patients, leaving survivors with long-term side effects. The virus itself has undergone several mutations, five of which have been identified by the World Health Organization as variants of concern.

Сomments
Add a comment
Сomments (0)
Partner news
Recommended:
Tesla goes to Turkey
Gas cuts to hit steel production in Turkey
China expects significant drop in steel production in 2022
On this topic
Spee3D causes the copper on various surfaces, creating an anti-virus coating
Scientists have found what metals most "like" coronavirus
Because of the terrible working conditions in Ukraine die each year hundreds of people - study
US military can get 3-D printers to print steel parts
What technologies help robots to become human?
Russian scientists create smart steel
News Analytics
Конструкторское бюро «Южное» прокомментировало состояние спутника «Січ-2-1»27-01-2022, 22:04
Эскалация в Украине радикально изменит рынки металлов и энергоносителей в Европе27-01-2022, 22:20
After the WTO decision, China urged the US to correct mistakes in trade27-01-2022, 16:38
Rinat Akhmetov's energy holding reduced green energy sales in 2021 due to27-01-2022, 16:58
Turkish Petroleum used Ukrainian pipes for the first time for a well 3 km deep27-01-2022, 16:44
Hydrogen will provide 12% of energy demand by 2050 - Irena27-01-2022, 09:58
Semiconductor shortage will persist for years to come09-01-2022, 13:11
2021 was the worst year for gold since 201501-01-2022, 13:08
Iron ore will be significantly cheaper in 2022 - consensus forecast by leading01-01-2022, 12:46
Profits of Ukrainian and Russian steel plants will remain above average until21-12-2021, 11:23
Sign in with: