World steel prices have moved from a protracted fall to growth 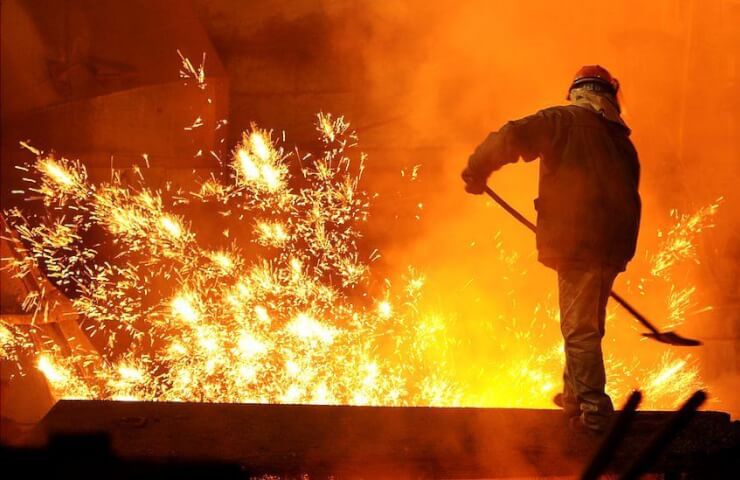 Steel prices regain their upward momentum after pulling back to a one-week low on Friday as fears of a short-term supply cut join rising demand. However, concerns about the US Fed's aggressive financial stance and economic slowdown are joining the worries ahead of US inflation data on Wednesday to test steel buyers' confidence.

"Demand picked up in mid-July as buyers stocked up in small volumes before the summer break in August, but that activity has since waned due to low-season plant closures," Fastmarkets said in a statement.

In another region of the world, Turkey is re-entering the global scrap metal markets after a short absence, which in turn is helping the demand matrix and metal prices. In addition, falling steel inventories in China and production volumes in July give additional impetus to steel prices.

It should be noted that China's trade figures for June were optimistic, with exports increasing the most in a year, which in turn is helping steel prices begin to recover. According to preliminary data, China's exports increased by 18% compared to the expected 15% and 17.9% earlier, while imports decreased to 2.3% compared to the previously expected 3.7% and 1.0%.

On the other hand, the easing of tensions between the US and China over Taiwan also seems to be favoring steel buyers. Reuters recently broke the news that China is ready for "regular" military exercises east of the median line of the Taiwan Strait. However, the Dragon Nation's foreign ministry announced on Friday that they will impose sanctions on U.S. House Speaker Nancy Pelosi over a visit to Taiwan. On the other hand, Taiwan's Ministry of Defense reported 66 Chinese aircraft operating in the Taiwan Strait as of 5:00 pm local time on Sunday. Further, US Secretary of State Anthony Blinken mentioned that China's provocative actions are a significant escalation.

However, the Fed's hawkish rate hike and recession fears seem to be challenging steel buyers. Interest rate futures signal a 73 percent chance in favor of a 75 basis point rate hike in the upcoming meetings. The likelihood of Fed aggression jumped after a strong report on US employment in July. In addition, the unemployment rate also fell to 3.5% from the expected 3.6% and previous readings.

Moving forward, monthly US inflation data will be critical for metal traders amid hopes of seeing demand for more metal, especially from China.

Финансовая аналитика, прогнозы цен на сталь, железную руду, уголь и другие сырьевые товары. More news and analytics on Metallurgprom telegram channel - subscribe to get up-to-date market information and price forecasts faster than others.
Сomments
Add a comment
Сomments (0)
On this topic
World gold prices fell to half-year lows due to the strengthening of the dollar
Gold price recovers amid risks of global inflation
2021 was the worst year for gold since 2015
World steel production up 0.6% in August - WorldSteel
European and Turkish metallurgists curtail steel production amid weak demand
Dollar climbs to 20-year high against euro
Recommended:
UK unions cancel all planned strikes after Queen's death
Ferroalloy enterprises of Ukraine in total reduced output by 27.6%
Ukraine may resume coal exports to Poland
News Analytics
Tata Steel merger plan to secure long-term profits03-10-2022, 10:46
US hydrogen prices to drop to zero dollars per kg in 5 to 6 years: Platts02-10-2022, 21:53
The production of passenger cars in Russia decreased by 2.8 times in eight29-09-2022, 11:19
Donetsk and Torez electrotechnical plants will start producing electrical29-09-2022, 11:37
Ukrainian coking plants reduced gross coke production by 55.2%29-09-2022, 11:28
China production cuts in winter will give limited boost to steel markets -15-09-2022, 10:09
Steel prices may rise as manufacturers stop production11-09-2022, 14:06
IREPAS: The global long products market is in a "dramatic situation"10-09-2022, 20:49
Steel prices are unlikely to rise significantly in the near future - analysts02-09-2022, 22:58
Steel prices may move up on new data from China31-08-2022, 12:19
Sign in with: