Today, when prices for iron ore on Asian exchanges have exceeded the most daring forecasts of analysts and are above $ 200 per ton, the Australian government predicts a drop in quotations to $ 55 in March 2022. 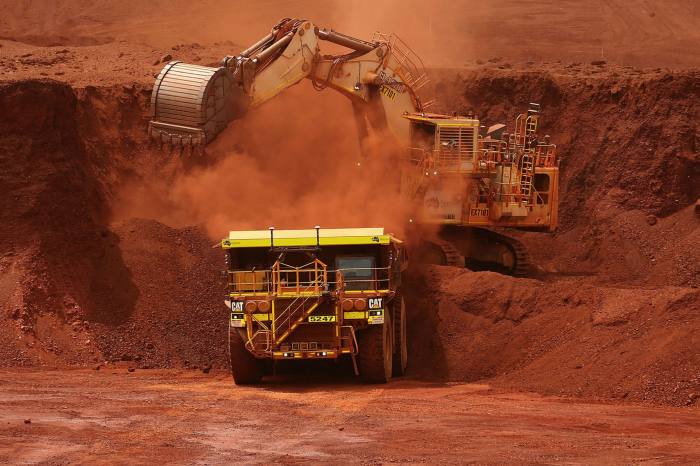 Despite the worldwide boom in commodity prices, Australian Treasury officials are budgeting for 2022 US $ 55 per tonne of iron ore.

"The iron ore price is projected to drop to $ 55 per tonne on FOB terms by the end of the March quarter of 2022, three quarters later than the 2020-2021 budget projected," quoted by The Australian the country's draft budget for the next two years.

Iron ore is one of Australia's top exports, with China, rapidly recovering from the pandemic, the largest consumer.

On May 10, the price of ore in Asian markets jumped by 10%, exceeding USD 206 per ton in China. At the same time, in Singapore, iron ore futures rose to $ 220 per ton, which became an absolute record in dollar terms.

China's steel production continues to grow despite attempts by the Chinese government to cut excess capacity to meet environmental targets. In March, steel production in the PRC increased by 19%. Against this backdrop, in April, imports of iron ore in China increased by 43% on an annualized basis, although these figures may be associated with the low base effect of the pandemic April 2020.

As a reminder, last week China "indefinitely" suspended all activities within the Sino-Australian Strategic Economic Dialogue, which was the latest setback in tensions between Beijing and Canberra.

Bilateral relations escalated in 2018, when Australia became the first country to publicly ban Chinese tech giant Huawei from accessing its 5G network. Relations worsened last year when Australia called for an independent investigation into the origin of the new coronavirus, prompting trade crackdowns from China.

If the trade war gets serious, the consequences for Australia will be much worse than for China. For Australia, China is a key trading partner, while Australia is not among the top 10 countries with the largest importers of Chinese products.

Финансовая аналитика, прогнозы цен на сталь, железную руду, уголь и другие сырьевые товары. More news and analytics on Metallurgprom telegram channel - subscribe to get up-to-date market information and price forecasts faster than others.
Сomments
Add a comment
Сomments (0)
On this topic
ArcelorMittal will overtake McDonald's Corp. in revenue this year. and PepsiCo Inc.
British analysts have named the date of the upcoming fall in steel prices
Representatives of the EU and Ukraine discussed ways to export strategically important metals and
Chinese steelmakers suspect iron ore suppliers of price fixing
Indian demand for iron ore is projected to grow at around 8 percent
For the first time in the history of Toyota bought Chinese steel for their cars
Recommended:
Metinvest intends to receive compensation from Russia for the destroyed plants in Mariupol
The state will not support the export of metals from Russia - Ministry of Industry and Trade of the Russian Federation
The European Union has sharply increased purchases of Russian titanium
News Analytics
Australia and the UK aim to catch up and overtake China in the battery metal26-11-2022, 22:37
The United States imposed a ban on the import and sale of equipment from26-11-2022, 22:31
The pipe metallurgical plant in Nikopol continued to work after a short stop26-11-2022, 22:52
The state will not support the export of metals from Russia - Ministry of25-11-2022, 13:18
ArcelorMittal Kryvyi Rih suspends production due to shelling of energy25-11-2022, 12:04
Platinum market to face shortage next year - WPIC22-11-2022, 18:25
Global steel demand falls and will fall by 2.3% in 2022: WorldSteel19-10-2022, 23:12
Iron ore prices fall to 11-month low15-10-2022, 10:36
China production cuts in winter will give limited boost to steel markets -15-09-2022, 10:09
Steel prices may rise as manufacturers stop production11-09-2022, 14:06
Sign in with: