The Ambassador of India to the Republic of Kazakhstan, Ms. Shubhdarshini Tripathi, and the military attaché Milan Nalawade visited the metallurgical plant of ArcelorMittal Temirtau JSC. 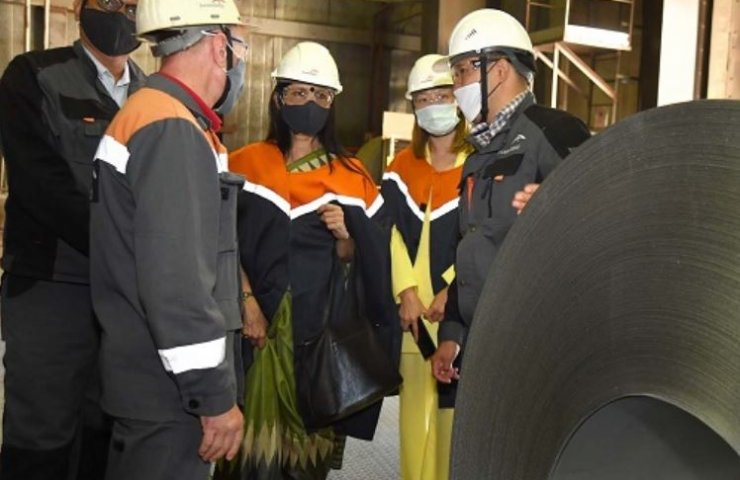 Ambassador Shubhdarshini Tripathi, accompanied by the military attaché Milan Nalavade, first visited the Karaganda region, and first of all got acquainted with the activities of the metallurgical plant of ArcelorMittal Temirtau JSC. This was reported by the press service of the plant.

Ms Shubhdarshini Tripathi noted the scale of the plant, drew attention to the cleanliness of workshops, roads and pedestrian routes, and was also pleasantly surprised by the number of women working at the plant.

Mrs. Shubhdarshini Tripathi expressed her gratitude to the management of ArcelorMittal Temirtau for organizing the reception and familiarization with the production.

Recommended:
Ukrainian-made gas equipment for the export of hydrogen to Europe is being tested in Ivano-Frankivsk
ArcelorMittal Receives Government Aid in Germany for Green Steel Transition
WorldSkills Ukraine 2022 professional competition will be held with the support of metallurgists in October
On this topic
ArcelorMittal Temirtau will pay 10,000 tenge to all employees vaccinated against coronavirus
ArcelorMittal Temirtau drone army replenished with three more fighters
India Offers Tesla Big Incentives To Build An Electric Vehicle Factory
Erbol Nurgaliyev visited the metallurgical plant of JSC "ArcelorMittal Temirtau"
The plant of ArcelorMittal in Kazakhstan is in normal mode despite the quarantine
Steel consumption growth in India slows down
Partner news
Сomments
Add a comment
Сomments (0)
News Analytics
Free access to data on special permits for the use of subsoil was opened in28-09-2021, 18:27
Zaporozhye iron ore plant modernized crushing and sorting plant28-09-2021, 16:48
The development of industrial parks will allow to completely restart the28-09-2021, 16:19
Ukrainian Foreign Ministry summoned the Hungarian Ambassador over an agreement28-09-2021, 12:43
ArcelorMittal to Build a Billion Euro Waste Blast Furnace in Belgium28-09-2021, 12:16
Oil prices to surpass $ 90 by year end due to shortages - Goldman Sachs27-09-2021, 10:58
Moody's changes its outlook for the mining and metals industry from "positive"14-09-2021, 18:39
European steel prices decline from summer highs and remain stable high04-09-2021, 10:38
Rise in European steel prices to dizzying levels finally fizzled out - Bloomberg27-08-2021, 13:18
Gold continues to be the most efficient portfolio asset - WGC26-08-2021, 12:38
Sign in with: