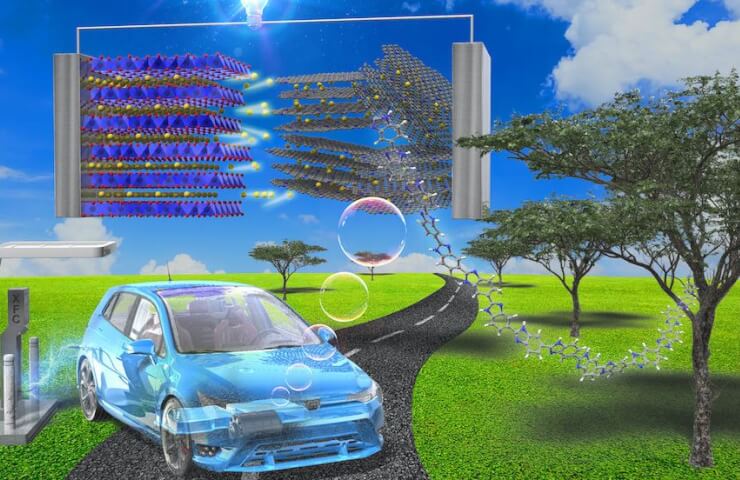 A team of scientists from the Japan Advanced Institute of Science and Technology (JAIST) has developed an anode fabrication approach that can lead to extremely fast charging of lithium-ion batteries (LIB).

In an article published in the journal Chemical Communications, the researchers explain that their strategy is a relatively simple, environmentally friendly and efficient way to produce a carbon-based anode with a very high nitrogen content.

It is already known that one way to shorten the LIB charging time is to increase the diffusion rate of lithium ions, which in turn can be achieved by increasing the interlayer spacing in carbon-based materials used in the battery anode. This has been achieved with some success by introducing nitrogen impurities, which are technically referred to as nitrogen doping. However, there is no readily available method for controlling interlayer spacing or alloying element concentration.

To address this issue, the Japanese group used poly (benzimidazole), a bio-based polymer that can be synthesized from bio-based raw materials as an anode precursor material.

By calcining this heat-resistant material at 800 ° C, the team managed to obtain a carbon anode with a record 17% nitrogen content by weight. They confirmed the successful synthesis of this material and studied its composition and structural properties using a variety of techniques, including scanning electron tunneling microscopy and X-ray photoelectron spectroscopy.

To test the performance of their anode and compare it to the more common graphite anode, the researchers built half-cells and complete cells and conducted charge-discharge experiments. The proposed anode material proved to be suitable for fast charging due to its improved lithium-ion kinetics.

Moreover, life tests have shown that batteries with the proposed anode material retain about 90% of their initial capacity even after 3000 charge-discharge cycles at a high rate, which significantly exceeds the capacity retained by graphite-based cells.

According to the researchers, changes in the structure of the polymer precursor can lead to even higher performance, which may be relevant for batteries not only for electric vehicles, but also for portable electronics.

"The extremely fast charging speed using our prepared anode material could make it suitable for use in electric vehicles," Group Leader Noriyoshi Matsumi said in a statement to the media. “We hope that much shorter charging times will drive consumers to choose electric vehicles over gasoline vehicles, ultimately leading to a cleaner environment in every major city around the world.”

According to Matsumi, another notable advantage of the proposed anode material is the use of a bio-based polymer in its synthesis. Thanks to the use of low carbon technology, this material naturally has a synergistic effect that further reduces CO2 emissions.