At the same time, market participants are concerned about the growth of imports and domestic production, could put pressure on prices and margins of its steel products. 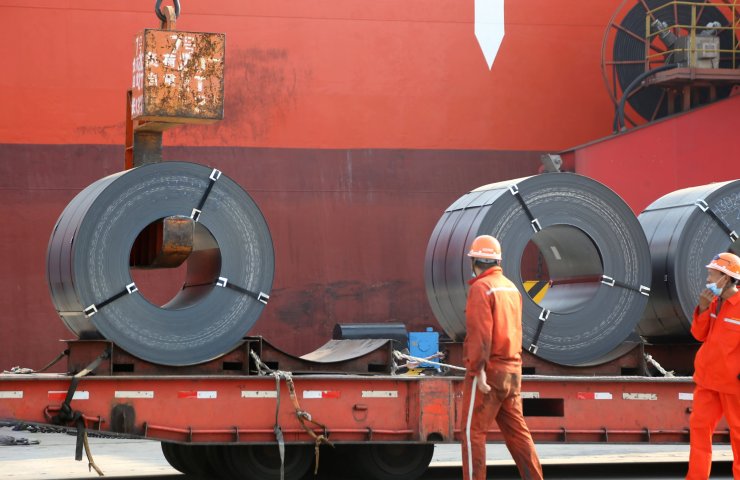 steel Demand in China will considerably exceed last year's levels in mid-summer, which is associated with persistently high iron ore prices and growing demand for steel products after the lifting of restrictions associated with Covid-19.

However, according to market participants, a high level of production and the increasing import volume together with rising prices for raw materials are the key risks to the forecast.

demand in the steel consuming sectors, generally increasing from March to April, but weakened in the period from mid-June to mid-July due to the onset of the rainy season in the South and East China and high temperatures in the North.

Prices for hot rolled coils in Shanghai have soared after the lifting of restrictions on coronavirus 450 yuan (about 63,60 USD) per ton to 3 650 yen as of 8 June, while stock prices for rebar grew by 220 yen USD 3 620 yen for the same period, according to Argus Media.

the Demand for rebar is likely to be supported by the increase of new projects in the real estate sector of China from the second quarter.

Decent profit margins prompted the Chinese factories working almost at full capacity for the last two months that has dramatically increased the volume of production.

According to estimates by market participants, the margin on the valve is about 100-200 yen and the profitability of hot rolled steel (HRC) - 100 yen per ton.

members of the Chinese Association of iron and steel (CISA) was melted in average 2,0925 million tons of steel per day in the period from 21 to 31 may, up 4.4 percent from a year earlier.

It was the second highest record level after 2,1049 million tons per day in mid-September, 2019. Data CISA include more than 100 of the largest steel producers in the country. 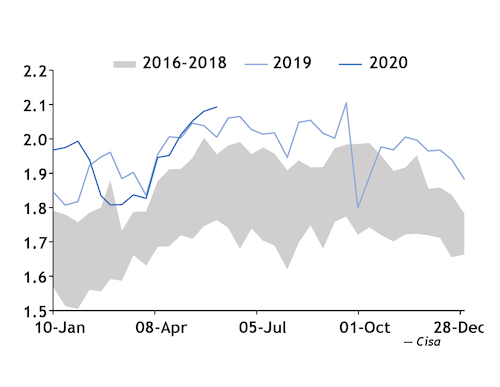 it is Expected that sustainable raw material prices, especially iron ore, will also support prices. There is also optimism in terms of demand based on government stimulus.

market Participants said that sustainable production and steel imports in the domestic market are factors that can affect the price of steel in China in the coming weeks.

"Chinese steel exports have largely ceased due to higher profits in the domestic market, while China imports steel from the second quarter. Steel imports may be about 5 million tons in the period from June to September, and they will compete in the domestic market and pressure on prices since the third quarter," analysts said.

"Domestic demand in China is good, but with shrinking demand for exports total demand for steel in China could decrease by 4% compared to last year", - say in the market. "Domestic steel production will continue to fluctuate at high levels."

Recommended:
Coal is a new hope: scientists have succeeded in turning fossil fuels into anode-grade graphite
Energomashspetsstal successfully handed over to the customer 8 covers for the steam generators of the Akkuyu NPP
US hits Iran's steel industry again
On this topic
In China, rising prices for steel and ore, but confidence in the further increase in no -CISA
World steel prices fell to the lowest level in the last three years
Profits of the Chinese metals sector remain limited in October
China's steel sector profits shrink inexorably
Steel prices in India fell to 19-month low
Chinese flat products manufacturers face oversupply
Add a comment
Сomments (0)
News Analytics
The price bubble in the US steel market has inflated to its maximum - the only27-01-2021, 10:00
Global steel production down 0.9% in 2020 - World Steel Association27-01-2021, 09:59
Interpipe fully repaid Eurobonds debt27-01-2021, 09:49
EVRAZ considers potential spin-off of coal business27-01-2021, 09:46
Китай ускорит разработку всепогодных аккумуляторов для электромобилей27-01-2021, 09:44
China will overtake the United States to become the world's largest economy in27-12-2020, 12:04
The shortage in the US steel market will last at least until the end of the25-12-2020, 11:36
Steel production in China to surpass one billion tons this year23-12-2020, 10:59
Iron ore prices hit seven-year high and continue to rise15-12-2020, 10:26
Prices for metallurgical raw materials continue to rise in regional markets10-12-2020, 11:32
Sign in with: