Flamingo numbers are declining, and a new study links this to water being extracted by mining companies for lithium-infused brine 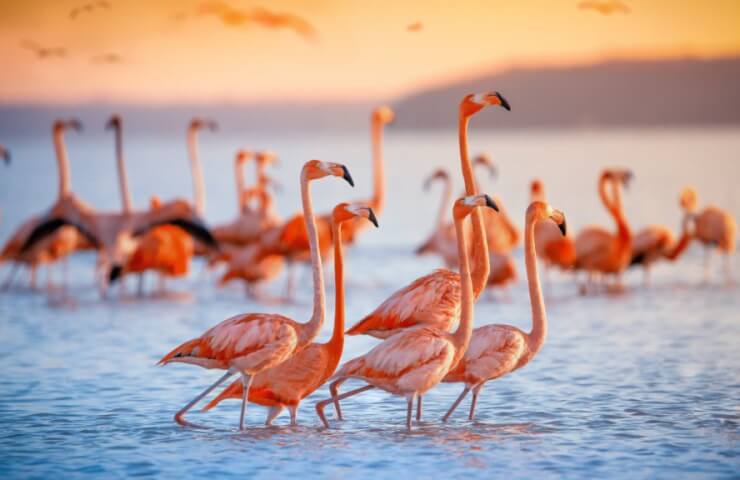 But the number of flamingos is declining, and a new study links this to water being extracted by mining companies to pump a brine filled with lithium, a metal used to make batteries for mobile phones, laptop computers and electric vehicles.

The miners claim their activities do not affect flamingo herds and say the research is based on unreliable data.

The standoff highlights growing tensions in the Andean nation over water use and the impact of mining on local communities and the environment. Tighter regulation poses a risk to the world's No. 2 lithium and No. 1 copper firms.

"It's the lithium extraction that you can explain the effects of," said Christina Dorador, co-author of the study in the Royal Society's Proceedings B, citing findings that flamingo numbers decreased as more water was used up.

Scientists examined salt marshes across Chile to measure the effect of other variables on water levels. Satellite images of mine ponds on the Atacama River, where most of the Chilean lithium is located, were used to calculate the amount of water extracted.

“It's not like they all die at once, but if you don't breed suddenly, even something that lives as long as a flamingo starts to die. And this is where the numbers really start to drop quite quickly.”

In other non-mining salt marshes, flamingo populations have remained stable over the past decade despite natural water fluctuations associated with rainfall and climate change. However, in the Atacama, the number of James and Andean flamingos decreased by 10-12%.

The National Mining Society of Chile declined to comment. Albemarle Corp, one of Chile's two main lithium mining companies, did not respond to a request for comment.

SQM, another major lithium producer, disagreed with key parts of the study, saying in a statement that its own monitoring showed "the flamingo population remains stable."

SQM ​​stated that satellite analysis could significantly overestimate or underestimate water use and called for more research on the ground.

Dorador, a scientist from the region and an elected official working on Chile's new constitution, said locals have noticed a decline in flamingo numbers on mining-damaged salt marshes for years.

“They are incredibly important because they are one of the top tourist attractions in San Pedro de Atacama,” Dorador said.

Dorador said local elders collect flamingo eggs from the plains for their regular diet, while the birds regulate the ecosystem by eating plankton, crustaceans and microorganisms, helping to avoid harmful bacterial blooms on the water.

The number of flamingos in Chile has generally survived thanks to herds on other shoals that have not been affected by mining. But the implications could be serious as demand for lithium batteries for electric vehicles will skyrocket, Dorador warned.

“We have to think about where these materials come from, because we are not always aware. We buy all these things, but often we don't know what had to happen to make this product.”

Финансовая аналитика, прогнозы цен на сталь, железную руду, уголь и другие сырьевые товары. More news and analytics on Metallurgprom telegram channel - subscribe to get up-to-date market information and price forecasts faster than others.
Сomments
Add a comment
Сomments (0)
On this topic
Biden: US will support new mines
The State Geological Survey of Ukraine has developed an algorithm of actions in the event of
Global lithium production reaches record high
Lithium supply crisis in full force
Elon Musk's Tesla makes a deal with Mozambique to reduce dependence on China
Biden's Production Plan Requires Significant Increase in U.S. Mineral Production
Recommended:
Metinvest reduced the use of its capacities by more than 40% due to the war in Ukraine
Zaporizhstal: production results in June 2022
Steel production in Russia will fall by at least 15% - the opinion of market participants
News Analytics
The Belarusian steel plant was visited by the Ambassador of Kazakhstan to06-07-2022, 17:44
US steel prices fall to December 2020 levels06-07-2022, 13:40
Interpipe mastered a new type of railway wheels for the EU market06-07-2022, 12:15
Tesla in the second quarter reduced the supply of cars by 18%04-07-2022, 10:24
Steel prices fall due to weakening European demand and problems in China04-07-2022, 10:40
High iron ore shortage could halt metallurgy's green transition28-06-2022, 14:02
Price volatility hits global steel market27-06-2022, 19:28
Recovery in China could be key to rising global steel prices - MEPS24-06-2022, 14:00
Conflict in Ukraine spurs Europe's drive for clean energy03-06-2022, 12:14
US steel market sentiment becomes more price neutral05-05-2022, 10:15
Sign in with: