Working the world's largest copper mine joined the protests in Chile

workers of the copper mine Escondida in Northern Chile went on strike in protest against government policy in terms of the riots that continue to sweep the land. 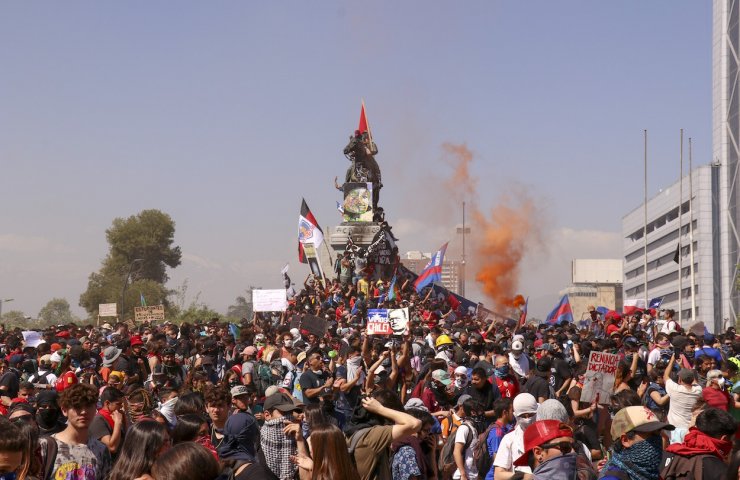 In a statement issued Monday, the Union representing the largest copper mine in the world Escondida (Escondida) said Tuesday that employees will leave work on the part of the working day in solidarity with the protests in Chile.

"Our employees ... almost unanimously agreed to protest against a series of abuses and violations by the company and to show solidarity with the demonstrations against the economic and social policies that affect us as workers," reads the statement of the Union.

the Escondida Mine last year sent "on-mountain" 1,243 million tons of copper, accounting for about a quarter of the total production in the country.

the richest country in South America the last 10 days and shaken the strongest riots after civil disobedience in connection with the increase fares on the subway turned into riots and looting, and mass protests.

Many of the mining unions joined the nationwide strike, which stopped production at some of the country's largest copper mines.

the trade Union called for Escondida BHP-controlled company to take measures to ensure the safety of workers in the conditions of unrest and repression by the police in the Northern port city of Antofagasta, home to many miners.

the Union also reiterated "the call for the government and the Congress with the active participation of trade unions and civil society to begin the legislative process of fundamental changes that really solve the needs of the vast majority in the country."

President Sebastian Pinera a few hours earlier has updated the composition of the government, replacing eight of its members, particularly the Minister of interior and public security Andres Chadwick. The head of state explained such a step change is required.