the head of the Confederation Mykhailo Volynets wrote a letter to President of Chile Sebastian Pinera. 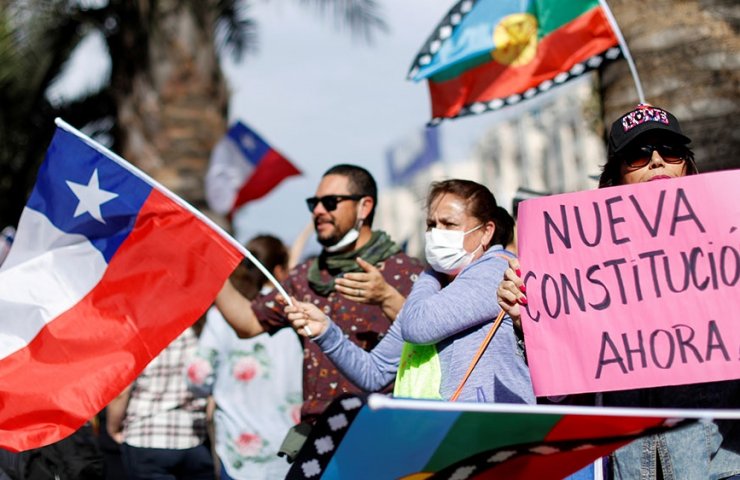 Confederation of free trade unions of Ukraine (of the KVPU) solidarity with the Chilean trade unions and condemns violence against protesters in Chile. About it said Chapter KVPU Mikhail Volynets.

According to Volynets, the main reason for mass discontent of Chileans - the decline in living standards and austerity policies.

"Chile - a country of the highest levels of inequality in OECD countries. In favor of the international financial institutions, the government has transferred all water resources into private hands. And privatization in education, health and other vital services has led to further impoverishment of millions of people", - said the head of the KVPU on his Facebook page, adding that he had sent a letter to President of Chile Sebastian Pinera.

the trade Unions in Chile have put forward several demands to the government:

- to immediately address the issue of increasing the minimum wage to $ 500, increase of the living wage and pensions.

- to guarantee the right to strike and freedom of Association;

- to change the public transport system and to ensure citizens the right to use it.

People are convinced that millions in state subsidies should lead to lower fares. They are proposing to introduce a fair price for the use of transport and free and reduced fares for a number of categories.

Also among the requirements is the return of the roads in the state.

Previously, coalsalesthat the protests in Chile affect the performance of the largest copper mines. The Union mine "Escondida" urged BHP-controlled company to take measures to ensure the safety of workers in the conditions of unrest and repression by the police in the Northern port city of Antofagasta, home to many miners.

President of Chile refused to hold UN Climate change conference scheduled for December this year, due to the massive protests that swept the country.

Protesters in Chile have expressed skepticism Monday about the announcement by the government that steps will be taken to amend the Constitution of the dictatorship era.

the Minister of the interior Gonzalo Blumel announced late Sunday evening that the government will proceed to drafting a new Constitution, stating that Congress will be responsible for the rewriting of the document, which will then be submitted to public referendum.

Recommended:
A new participant in the electricity market will appear in Ukraine - an operator of storage systems
Global steel production up 3.3% on the back of a significant reduction in smelting in China
Potential investor KGOKOR presented a project to restore the operation of the GOK for $ 100 million
On this topic
Chile refused to accept the climate conference of the UN
Miners go to Kiev to protest: will demand a billion hryvnia
In Donetsk region, 2 mines were disconnected from the power supply
Volynets: the Ukrainian government began to fulfill the promise of salary debts to miners
The Independent Trade Union of Miners of Ukraine decided to prepare for an all-Ukrainian protest
Miners are preparing to picket the Luhansk civil-military administration
Partner news
Сomments
Add a comment
Сomments (0)
News Analytics
State Environmental Inspection filed claims against ArcelorMittal Kryvyi Rih in17-09-2021, 10:28
US Steel will build an electrometallurgical plant with a capacity of 3 million17-09-2021, 10:48
Airbus begins designing a hydrogen-powered aircraft17-09-2021, 10:06
There are already 779 enterprises in Ukraine that officially carry out17-09-2021, 09:16
Low-cost carrier Ryanair plans aggressive expansion in Ukraine16-09-2021, 21:34
Moody's changes its outlook for the mining and metals industry from "positive"14-09-2021, 18:39
European steel prices decline from summer highs and remain stable high04-09-2021, 10:38
Rise in European steel prices to dizzying levels finally fizzled out - Bloomberg27-08-2021, 13:18
Gold continues to be the most efficient portfolio asset - WGC26-08-2021, 12:38
Falling iron ore prices caught Wall Street by surprise - WSJ23-08-2021, 13:57
Sign in with: