The association called for a knowledge-based approach to mining and called on women to “stop treating mining as a hobby.” 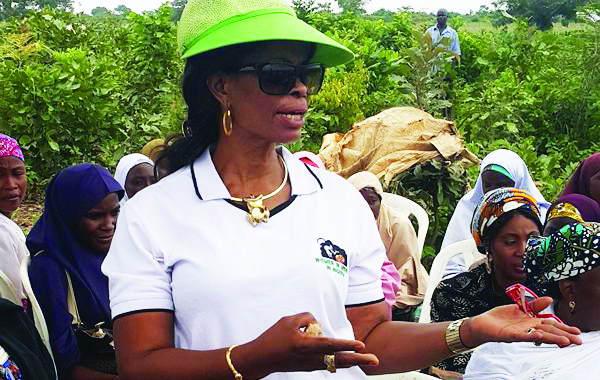 President of Women in Mining of Nigeria (WIMN) Janet Adeyemi, speaking at the 5th Annual Mountain Week of Nigeria, announced the growth of Chinese capital expansion and demanded better coordination in the industry amid what she described as "strong headwind ".

Ms Adeyemi, a mining veteran, geologist and industry pioneer, also spoke of networking, mentoring and capacity building as tools that women need to use to build what she called “inclusiveness,” adding, that plans are underway to recruit experts to help train and develop the capacity of members.

She has severely criticized women miners, claiming that some of them acquire licenses, which are then resell to Chinese businessmen.

“The Chinese are simply tearing us apart. We must refrain from transferring licenses to them. If the problem is funding, we can cooperate with each other, ”she said, explaining that the new headquarters will serve as a resource center“ where everyone can come to fill knowledge gaps. ”

Women in Mining in Nigeria (WIMIN) is a not-for-profit organization formed to advocate for the rights of all groups of women affected by mining. WIMIN is a member of the Nigeria Miners' Association and supports massive personal and professional development initiatives while providing a national voice in the global mining community.

The organization is charged with the responsibility of advocating and promoting women's participation in the mining industry in Nigeria, promoting and promoting a friendly and sustainable environment by promoting good host community participation models that include women, building a strong network among members and women in the mining industry in Nigeria to encourage networking, mentoring, job opportunities, funding and leadership.

Recommended:
Rinat Akhmetov's metallurgical plant in Great Britain took out a loan of 35 million pounds
A sharp rise in prices for diesel fuel is expected in Ukraine - Derzhzovnishinform
Zaporizhstal will install an oxygen station in the Zaporizhzhya regional infectious diseases hospital
On this topic
KZhRK miners' strike threatens with loss of sales markets without prospects of their return
Iron ore prices to surpass six-year high soon
Yakutia will ask Rosgeologia to audit licenses
KrAZ trucks will be assembled in Nigeria
Jihadists undermine the extraction of gold in Burkina Faso attacking mine
The Federal government of Nigeria is planning to ban the import of steel into the country
Add a comment
Сomments (0)
News Analytics
US Provides $ 20 Billion in Government Support to Airlines to Pay Salaries02-12-2020, 19:25
Metinvest closes its first securitization deal02-12-2020, 19:05
Sanjiv Gupta one of these days will find out all the financial secrets of the02-12-2020, 19:18
EU asks Biden to abolish duties on steel and aluminum02-12-2020, 15:16
Mariupol plant named after Ilyich produced the first 20 thousand tons of02-12-2020, 15:54
European Union scrap collectors worried about possible export restrictions18-11-2020, 10:41
Occupational diseases of workers in the extractive industry: types and ways to16-11-2020, 17:49
Eurofer expects recovery in EU steel demand05-11-2020, 09:47
Hot rolled carbon steel demand will continue to grow by 4% pa until 203004-11-2020, 16:14
Platts Steel Trade Review: China Will Decide Asia's Fate30-10-2020, 10:04
Sign in with: