At the Raspadskaya mine, IT technologies are actively being introduced, investment projects are being implemented aimed at developing production and ensuring safe working conditions. 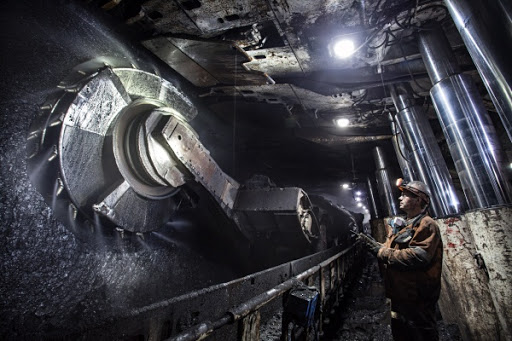 Since the beginning of 2020, the Raspadskaya mine has produced more than 5 million tons of coal, of which 2 million tons are mine sites No. 17 and 32. In honor of the production achievement, a solemn meeting was held at the enterprise, the General Director of Raspadskaya congratulated the miners coal company Andrey Davydov.

This production indicator is the result of the well-coordinated work of the entire mine staff. The representatives of the cleaning brigades headed by the heads of the sections Dmitry Syrov and Artem Beloshapkin took the stage. The symbolic stones of coal were carried out by the foremen Aleksey Ivanov and Vadim Sychev. The miners were awarded a well-deserved cup and diplomas.

- This is a worthy result, a common labor victory for the entire enterprise. To prepare coal for mining, to lift it up the mountain, you need to do a lot of work. There is stability at the Raspadskaya mine along the entire production chain, - noted Andrey Davydov, General Director of Raspadskaya Coal Company.

At the beginning of 2020, the miners of the Raspadskaya mine were producing coal in three longwalls. By the middle of summer, according to the plan, they switched to two-stage production at coal seams 6-6a and 7-7a. The preparatory sections also contributed to the overall result. Drivers, in parallel with the preparation of new mine workings, mined about 500 thousand tons of coal.

At the Raspadskaya mine, IT technologies are being actively implemented, investment projects are being implemented aimed at developing production and ensuring safe working conditions. The miners of Sections 17 and 32 work on high-performance machinery. All mine faces are equipped with video surveillance cameras.

Raspadskaya Mine produces high-quality GZh coking coal. After enrichment at the Raspadskaya PF, it is shipped to the metallurgical enterprises of EVRAZ and to third-party consumers.

Recommended:
Washington imposed curfew after Trump supporters seized US Congress building
China plans to build 600,000 more 5G base stations in 2021
Eleven miners still await rescue from exploded gold mine in China
On this topic
Ukraine asks the UK to share its experience in transforming coal regions
Miners of Galicia received a congratulatory telegram from the new head of the Ministry of Energy
Environmentalists not allowed to replace Russian coal into the UK domestic raw materials
Minamaneho heard the reports of heads of several state-owned mines
In Luhansk region the miners refused to come to the surface
EVRAZ will not increase its stake in Raspadskaya yet
Add a comment
Сomments (0)
News Analytics
Trump's legacy - carmakers shut down factories over Chinese chip shortages24-01-2021, 12:05
Adviser to the President of Ukraine: We expect 2021 to be a year of economic24-01-2021, 11:52
11 miners rescued from exploding gold mine in China on January 1024-01-2021, 11:05
Мариупольские металлурги продолжают экологическую модернизацию несмотря на24-01-2021, 11:01
Industry association predicts 8% growth in passenger car sales in China in 202123-01-2021, 11:07
China will overtake the United States to become the world's largest economy in27-12-2020, 12:04
The shortage in the US steel market will last at least until the end of the25-12-2020, 11:36
Steel production in China to surpass one billion tons this year23-12-2020, 10:59
Iron ore prices hit seven-year high and continue to rise15-12-2020, 10:26
Prices for metallurgical raw materials continue to rise in regional markets10-12-2020, 11:32
Sign in with: