In search of additional funds to fill the budget, not hoping for help from the IMF, the President of Ukraine decided to look into the pockets of the richest citizens of the country, whose business is somehow connected with the metallurgical and mining industries. 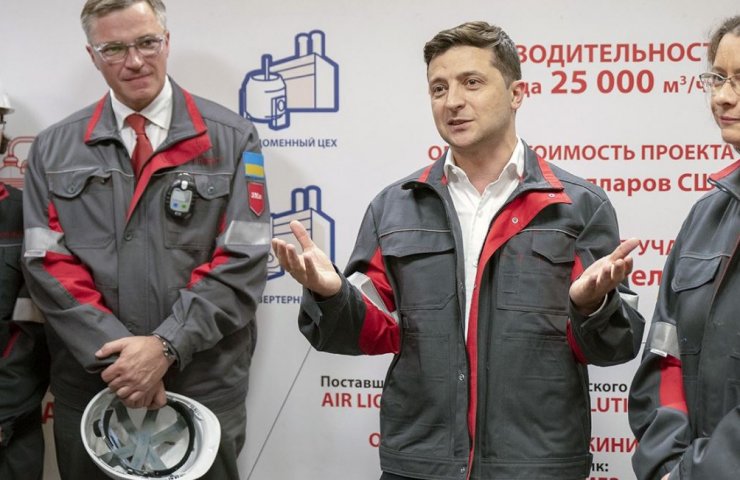 To triple - from 10 to 30 hryvnia per ton - the rate of the environmental tax on carbon dioxide emissions (CO 2 ) is proposed by the Ministry of Finance of Ukraine, the corresponding norm is contained in the so-called "resource bill" developed by him. According to the document, the Ministry of Finance will also initiate a step-by-step - until January 1, 2029 - 10-fold increase in the rates of this tax on emissions of pollutants into water bodies.

It is assumed that from July 1 of this year, when this bill may come into force, they will be doubled, and from January 1, 2022, they will increase annually by another 100% of the current level (or 10% of the final level) .

In addition, from July 1, 2021, the Ministry of Finance proposes to pay rent for the extraction of iron ore not from the cost price, but from the market price. It is proposed to establish the following gradation of the size of the rent:

The government proposed adopting a similar resource bill (No. 4101-d) in a package with the law on the state budget-2021, but the deputies refused to do so. In that bill, there was a similar provision on a phased increase in the environmental tax on discharges. As for the tax on CO emissions 2 , it was also proposed to increase it in stages - by UAH 5 per tonne - until 2024 in the fall of last year.

The bill has already been called anti-Akhmetov, as it deals a tangible blow to the empire of the main owner of the Dutch mining and metallurgical holding Metinvest B.V. Rinat Akhmetova.

At the same time, there are about a dozen enterprises in Ukraine that are engaged in the extraction of iron ore. In addition to Akhmetov's interests, the financial balances of PJSC "Sukha Balka" (part of the DCH group of Alexander Yaroslavsky) will be affected; Poltava GOK and Eristovsky GOK (part of Konstantin Zhevago's Ferrexpo). The wallets of foreign investors ArcelorMittal Kryvyi Rih, owned by the global metallurgical giant - the ArcelorMittal group of Indian businessman Lakshmi Mittal, will also suffer.

Финансовая аналитика, прогнозы цен на сталь, железную руду, уголь и другие сырьевые товары. More news and analytics on Metallurgprom telegram channel - subscribe to get up-to-date market information and price forecasts faster than others.
Сomments
Add a comment
Сomments (0)
On this topic
The steel industry, the United States recognized itself the most energy efficient in the world
Zaporizhzhya Ferroalloy Plant highly appreciates Norwegian technologies
Metinvest Group Pays Another Coupon on USD 19.4 Million Eurobonds
From Ferrexpo retired marketing Director
Metinvest's bonds are included in the global debt indices of emerging markets
UN Secretary General: humanity has a chance to cope with global warming
Recommended:
EU extends anti-dumping duties on cold rolled steel from China and Russia
The state will not support the export of metals from Russia - Ministry of Industry and Trade of the Russian Federation
Platinum market to face shortage next year - WPIC
News Analytics
China's iron ore output to rise in 2023 as new projects are launched30-11-2022, 18:10
"Centravis" agreed to supply a new batch of seamless pipes to a30-11-2022, 16:51
Metinvest enterprises in Ukraine resumed work after massive shelling of29-11-2022, 11:59
The European Council added the violation of restrictive measures (sanctions) to28-11-2022, 14:22
The abolition of export duty in India may reduce the price of Turkish steel28-11-2022, 14:07
Commodity prices will fall, metals quotes will rise slightly - Focus Economics28-11-2022, 13:28
Platinum market to face shortage next year - WPIC22-11-2022, 18:25
Global steel demand falls and will fall by 2.3% in 2022: WorldSteel19-10-2022, 23:12
Iron ore prices fall to 11-month low15-10-2022, 10:36
China production cuts in winter will give limited boost to steel markets -15-09-2022, 10:09
Sign in with: