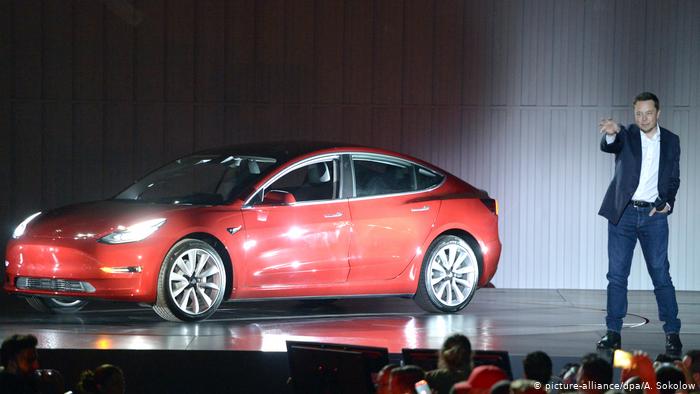 After the publication of this message, the company's shares continued to rise in price, although the growth rate slowed down to 2.6% from 8% at the beginning of the session.

The placement agents will include leading banks such as Goldman Sachs, Bank of America Securities, Citigroup Global Markets and Morgan Stanley, writes The New York Times.

The additional issue was announced the day after a 5-to-1 split of Tesla shares took place. The company's capitalization jumped 12.6% on Monday, and reached a record amid high trading activity.

As a result, the market value of Tesla ($ 464.3 billion) exceeded the capitalization of Visa Inc. (451.1 billion), according to Dow Jones Market Data. Currently, in the Standard & Poor 's 500 stock index, only six companies surpass Tesla in terms of capitalization.

Over the past three months, the stock quotes of the manufacturer of electric vehicles soared by about 200%, since the beginning of this year - by 500%. The S&P 500 has increased by 15% and 8%, respectively, over these periods.

Elon Musk has repeatedly assured investors over the past year that Tesla will not need to raise additional money for costly initiatives, including building its first plant in Europe and recently announced construction of a new plant near Austin, Texas.

However, in February, the company announced plans to raise $ 2 billion in its share placement.

Tesla has released a video of the Gigafactory 3 assembly line in Shanghai, which allows you to evaluate the manufacturability of the brand's electric vehicles. A short video clearly demonstrates that people in production are already playing a supporting role, and the main tasks are performed by robots.

Recommended:
The capacity of the Ukrainian rolled metal market in eight months of 2020 increased by 3%
Flat steel prices soar in the US
September 7 is the International Day of Clean Air - the UN has prepared a report
On this topic
In the world financial markets grow optimistic mood
Goldman Sachs expects a decline in world GDP by 1% because of "coronaries"
Tesla sell their shares at a five percent discount
Tesla will hold an additional share issue of two billion dollars
Tesla's market capitalization exceeded one hundred billion dollars
3 out of 10 predictions of Goldman Sachs on the US economy in 2019 was wrong
Add a comment
Сomments (0)
News Analytics
Indian state steel company to sell non-core assets19-09-2020, 18:50
Largest US steel company to lose $ 100 million in Q319-09-2020, 18:50
UN experts believe that the worst-case scenario for the Ukrainian economy can19-09-2020, 18:47
KZhRK miners' strike threatens with loss of sales markets without prospects of16-09-2020, 21:51
Privatization of the alcohol industry has started in Ukraine16-09-2020, 14:56
Iron ore prices to surpass six-year high soon16-09-2020, 10:32
World Oil Demand Peak May Be Over - BP15-09-2020, 09:05
China expands car market capacity by increasing demand for steel and metals11-09-2020, 10:56
Prices continue to rise in the long and flat steel markets08-09-2020, 14:25
Difference between ferrous and non-ferrous metal28-08-2020, 13:45
Sign in with: