Tesla's revenue doubles, allowing it to end the first quarter with a record profit

The results of the American auto company beat Wall Street analysts' expectations, with revenues growing from $ 5.99 billion a year earlier to $ 10.39 billion. 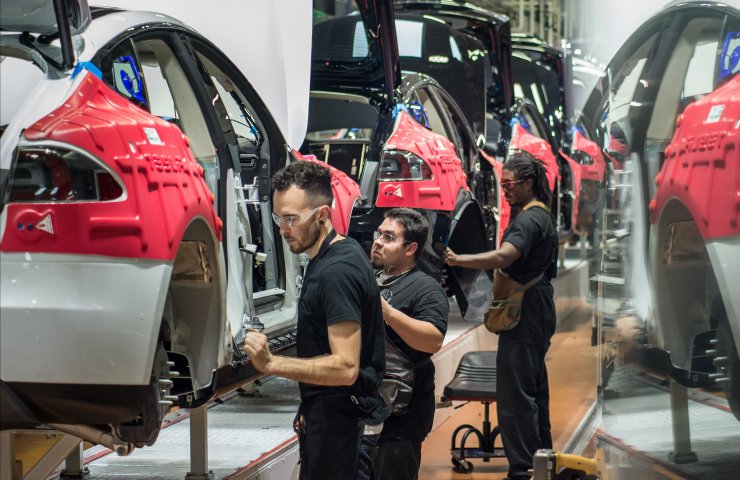 American electric vehicle manufacturer Tesla Inc ended the first quarter of 2021 with a record profit on the back of double year-on-year revenue growth.

Last quarter, Tesla sold emissions credits to other automakers for a record $ 518 million, up 46% from sales in the same period last year. Without the sale of quotas, Tesla would have ended the quarter with a loss. In addition, in the first quarter, the company also made $ 101 million in Bitcoin sales.

The average selling price of a car decreased by 13%, on the eve of updates to the Model S and Model X, their sales decreased, and their growth was provided by China. Tesla said the first deliveries of the new Model S should begin shortly. The company also plans to ramp up Model Y production in Shanghai to continue to improve. Updated versions of the more expensive Model S sedans and Model X SUVs have been shelved at a time when rivals Volkswagen and Ford launched all-electric vehicles.

Tesla shares fell 1.6% in additional trading on Monday. Since the beginning of this year, their value has grown by 4.6%.

Recommended:
Singapore chipmaker warns of global chip shortage until 2023
Uralvagonzavod began manufacturing a unique test bench
Zlatoust Metallurgical Plant spoke about new types of mastered metal products
On this topic
Washington imposed curfew after Trump supporters seized US Congress building
Tesla didn’t fulfill Elon Musk’s promise to deliver 500,000 cars to its customers in 2020
Biden's Production Plan Requires Significant Increase in U.S. Mineral Production
Mother Elon musk helped his son to sell the Tesla in the new year's eve
The steel industry, the United States recognized itself the most energy efficient in the world
USA records record steel production
Add a comment
Сomments (0)
News Analytics
Demand for scrap metal in Ukraine exceeds supply by 5%19-06-2021, 11:45
Ukraine resumed sea purchases of gasoline due to restrictions on supplies from19-06-2021, 11:38
Installation of the first mine hoisting machine of Uralmashzavod began in Altai19-06-2021, 11:46
European designers have learned to inflate steel structures that could be a18-06-2021, 17:42
In Ukraine, police were accused of involvement in the theft of coal from trains18-06-2021, 17:51
Vaccinations fuel demand for platinum - World Platinum Investment Council08-06-2021, 12:55
Sharp price growth continues in the rolled metal market - Ukrpromvneshexpertiza08-06-2021, 11:04
Analysts note overheating of the global scrap metal market01-06-2021, 13:28
Hydrogen-fueled steelmaking could be competitive after 2050 - McKinsey19-05-2021, 14:22
Steel raw material prices are skyrocketing across the board18-05-2021, 12:34
Sign in with: