Construction of the Ecolant hydrogen metallurgical plant began in Russia

The large-scale project for the construction of an electrometallurgical complex with direct reduced iron technology is unique in many respects. 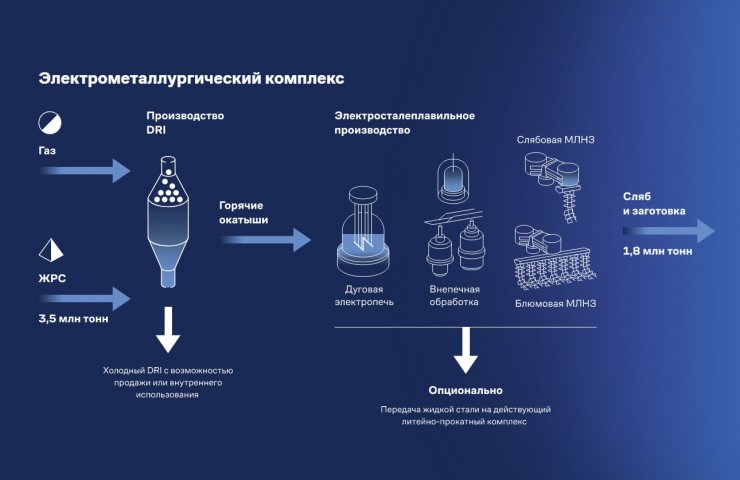 The first steel-making plant will appear in Russia, which will be three times more environmentally friendly than the existing metallurgical production. The Ekolant metallurgical plant, which is currently being built in the monotown of Vyksa in the Nizhny Novgorod region, will make it possible to create production with the best “green” technology available today.

In terms of its design characteristics, the plant will meet not only modern international environmental requirements, but also promising ones aimed at reducing the carbon footprint in the future. This will allow products made from its steel to avoid additional environmental cross-border tax when supplying to Europe and other countries where similar regulation applies.

The new steelmaking complex will not have the usual by-product coke and blast furnace converters. Steel will be produced from ore and natural gas using "hydrogen technology" using the Direct Reduced Iron method. According to the project initiators, a single ore-steel production chain will be implemented at Ecolant.

First, metallized pellets, the so-called intermediate product, will be produced from ore and natural gas. It will immediately enter the hot steel furnace, from which the resulting steel will go for out-of-furnace processing and casting. This is the shortest and most efficient production chain. This technology has not yet been implemented in Russia. It will allow to reduce greenhouse gas emissions into the atmosphere from this production by up to three times compared to the traditional blast-furnace technology, which today produces more than 70 percent of the world's steel.

The capacities of the Ecolant metallurgical complex will allow the production of 1.8 million tons of green steel per year. The steel will be produced in two main formats: slab and round billet.

The main consumer of the produced steel will be the Vyksa plant of the United Metallurgical Company. It is one of the largest and most modern European manufacturers of pipes for various purposes and other metallurgical products.

Since 2025, large-diameter pipes for main gas and oil pipelines, steel sheets for shipbuilding, railway wheels, pipes for oil and gas production, including in a new workshop with a capacity of 500 thousand tons of pipe per year, which will begin work in 2022 year, will be produced from "green" steel "Ecolant".

The new enterprise will be equipped with the first in Russia and the most efficient gas cleaning system, which will reduce emissions of suspended solids up to 5 mg per cubic meter. The heat generated during steel production will be used for its own generation of electric power with a capacity of 24 MW, which will provide a significant part of the needs of the new production.

The launch of Ecolant will create more than 700 additional jobs, and for the period of its construction - 2,000 more jobs.