The merger of Turboatom and Electrotyazhmash has entered the final stage

Acting Chairman of the Kharkiv Regional Administration Alexander Skakun told about this after a meeting with the Prime Minister, dedicated to the new Kharkiv concern "Ukrainian Power Machines". 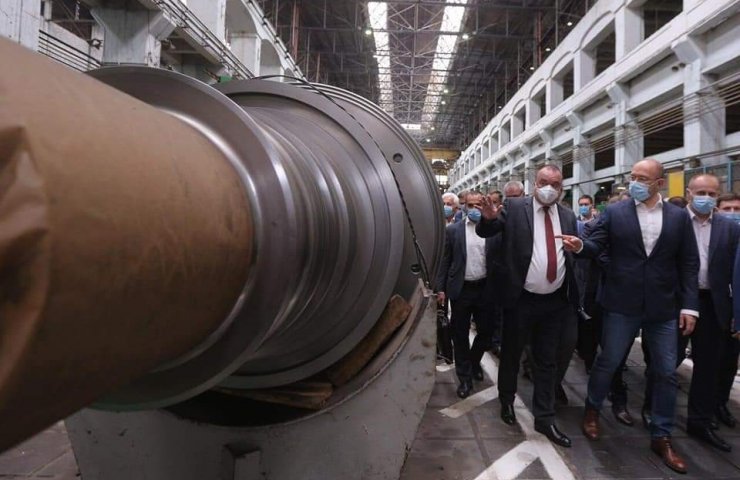 A meeting with the participation of the Prime Minister of Ukraine Denis Shmygal, dedicated to the unification of two Kharkov machine-building enterprises - Turboatom JSC and Electrotyazhmash JSC - and the creation of the Ukrainian Energy Machines concern on their basis, was held on Thursday, October 21, in Kiev.

“The merger of Turboatom and Electrotyazhmash is in the final phase. Sorted out with creditors - in particular, Energoatom. Prescribed and approved the terms of debt repayment. What does this mean for the region? Two enterprises have been preserved. The prospect of their work is clear. The teams will have jobs and wages. New contracts are guaranteed, "- wrote the acting chairman of the Kharkiv regional administration Alexander Skakun in his note on the Facebook page.

As previously reported, the Kharkiv plants "Turboatom" and "Electrotyazhmash" are not simply merged into the "Ukrainian Power Machines". The new giant enterprise is transferred to the direct management of the Cabinet of Ministers of Ukraine. The State Property Fund will transfer a controlling stake to the government - immediately after the completion of the merger process.

Финансовая аналитика, прогнозы цен на сталь, железную руду, уголь и другие сырьевые товары. More news and analytics on Metallurgprom telegram channel - subscribe to get up-to-date market information and price forecasts faster than others.
Сomments
Add a comment
Сomments (0)
On this topic
The enterprise based on Turboatom and Electrotyazhmash will be directly subordinate to the
Turboatom and Electrotyazhmash discussed prospects for cooperation under Ukrhydroenergo contracts
At Turboatom presented the achievements of the economy of Ukraine in the last 100 days
Metinvest to provide oxygen to hospitals in Kiev and Kharkiv region
Turboatom will not sell in turbo mode - Milovanov
Turboatom will grow by Electrotyazhmash: Kharkov plants were allowed to unite
Recommended:
British Steel seeks financial support from the government to continue work
Analysts confident of significant growth in global demand for galvanized steel
Nucor Rolls First Steel Sheet at New Kentucky Steel Plant
News Analytics
British scientists have found a way to cut CO2 emissions from steel production28-01-2023, 23:49
European steel price rise that began in January will be short-lived - MEPS26-01-2023, 14:44
Steel production in China rose in the first decade of January26-01-2023, 12:30
UK is ready to give 300 million pounds to save British Steel20-01-2023, 21:31
Carriage building plant in Kremenchug stopped production due to debts20-01-2023, 21:11
S&P: Russia will continue to dominate the steel export market in the Black05-01-2023, 11:22
Fitch Analysts Predict Big Drop in Global Steel Consumption This Year14-12-2022, 13:59
Analysts predict 5% annual growth in the iron casting market through 203006-12-2022, 12:44
Commodity prices will fall, metals quotes will rise slightly - Focus Economics28-11-2022, 13:28
Platinum market to face shortage next year - WPIC22-11-2022, 18:25
Sign in with: