the construction of five Ukrainian gidrometeostantsiya (HPP) was funded by European banks. 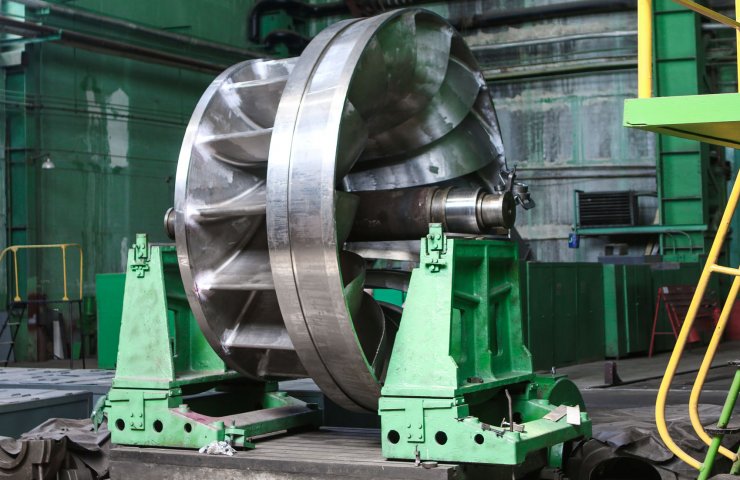 In the shops at "Turboatom" completed the production of the main units for hydraulic unit №4 Kyiv GIES. In particular, in shop No. 73 proceeded to a final balancing of the impeller. In shop No. 83 completed final processing of the cover of the turbine and the guide device is prepared for installation and future test Assembly. The objective of production is to complete the work under this order and prepare the products for delivery in July of this year.

impeller for DniproHES-2 (station 14) is fully delivered to the customer and the plant began its shipment to the station. In June, planned to complete work by regulating the ring, and in July to complete the Assembly of the guiding unit.

For the middle Dnieper hydroelectric station (station No. 1) shop No. 83 gathered the impeller and completes the final cutting blades. Under plans, production is already in the current month will assemble the impeller under the functional test. Work on the guide vanes continue.

the Guide vanes and impeller for Kanevskaya HPP (station 18) delivered to the customer.

For Kremenchug HPP (station No. 4) constructed and delivered to the customer chamber of the impeller: the embedded parts ready for shipment.

Recall that the reconstruction of the Ukrainian hydroelectric power station was financed by the European banks. In particular, "Turboatom" together with "Electrotyazhmash" is implementing a number of projects:

Финансовая аналитика, прогнозы цен на сталь, железную руду, уголь и другие сырьевые товары. More news and analytics on Metallurgprom telegram channel - subscribe to get up-to-date market information and price forecasts faster than others.
Сomments
Add a comment
Сomments (0)
On this topic
JSC "Turboatom " shipped the fourth guide vane out of seven planned
Turboatom manufactured the main equipment for the hydraulic turbine of the Kremenchug HPP
Photo: On the Dniester PSP mounted impeller weighing 120 tons
Turboatom and Electrotyazhmash discussed prospects for cooperation under Ukrhydroenergo contracts
Ukrhydroenergo discussed the current state of implementation of the project "Rehabilitation of
Works on equipment for the South-Ukrainian NPP completed in the shops of Turboatom
Recommended:
The world's first contract for the supply of a 1 GW hydrogen electrolytic cell was signed
Japan's Nippon Steel starts buying gas at record high prices
Serbian steel plant shuts down blast furnace due to high gas prices
News Analytics
Russian metallurgists will need more than 10 years to replace imports of key09-08-2022, 07:23
China reduced steel exports in July by one million tons or 12%08-08-2022, 17:41
World steel prices have moved from a protracted fall to growth08-08-2022, 16:27
Ferrexpo's net profit in the first half of the year decreased by 88%03-08-2022, 10:20
Ukrainian gas transportation system allowed to pump biomethane03-08-2022, 10:18
The US market may begin a collapse in prices for thick sheet14-07-2022, 09:39
High iron ore shortage could halt metallurgy's green transition28-06-2022, 14:02
Price volatility hits global steel market27-06-2022, 19:28
Recovery in China could be key to rising global steel prices - MEPS24-06-2022, 14:00
Conflict in Ukraine spurs Europe's drive for clean energy03-06-2022, 12:14
Sign in with: