DniproHES is being prepared for reconstruction

A three-meter sidewalk with photo zones and a two-meter-high panoramic fence, visually reminiscent of traditional Ukrainian embroidered shirt, will be installed at DneproGES for pedestrians. Bicycle and scooter tracks will be located on the second tier. 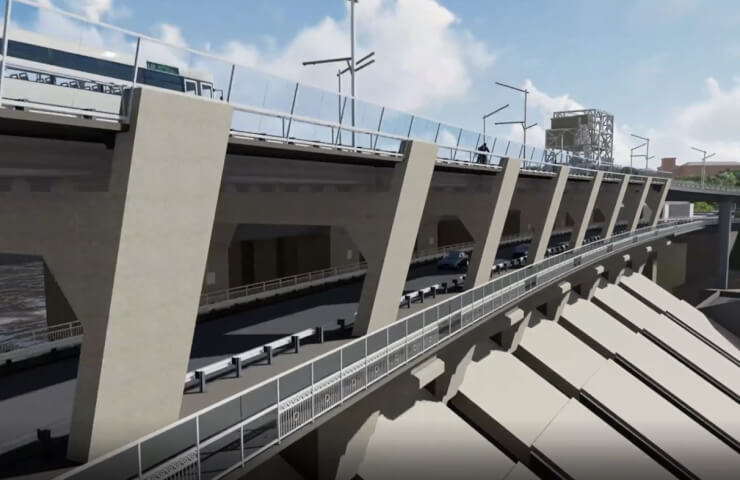 Director of the Dnieper Hydroelectric Power Station Viktor Kucher said that the issue of reconstruction of the hydroelectric power station is very important and requires an early solution. The DniproHES dam has been in operation for more than 89 years, it has experienced destruction and restoration twice in its history, and today the state of the structure is assessed by specialists as of limited working capacity.

The considered variant of the conceptual solution provides for a two-level auto-crossing over the dam of the hydroelectric power station with wide pedestrian and bicycle paths. The chief engineer of the project, Vadim Galat, presented the first stage of the project development on the basis of conceptual solutions developed and previously approved by the scientific and technical council for the development of the reconstruction of the road crossing.

“An important element that has been added to the project is the supports of the bridge across the front chambers, since during the post-war period these supports were not subject to detailed examination and restoration. Together with the designers, we came to the understanding that these structures require a very detailed survey and strengthening, "- said Vadim Galat.

Vadim Galat also noted that before the construction of the bridge, a large-scale survey will be carried out, including the underwater parts of the dam.

The Scientific and Technical Council approved the project developed by the Ukrgidproject for the reconstruction of a bridge crossing over the dam of the Dnieper hydroelectric power station as part of a single-tier flyover through locks, sections of the interface with the left bank of metal spans on reinforced concrete supports, a two-tiered reinforced concrete bridge across the dam with a metal bridge through a variable-section anterior chamber, connecting the two-tiered structure of the bridge over the dam and the road on the right bank. Reinforcement of all pillars of the bridge across the forecourt with a reinforced concrete bandage and reinforcement of the dams in accordance with the design requirements will also be carried out, and the reconstruction of the surfaces of the bulls and the weir surfaces of the dam will be carried out.

Финансовая аналитика, прогнозы цен на сталь, железную руду, уголь и другие сырьевые товары. More news and analytics on Metallurgprom telegram channel - subscribe to get up-to-date market information and price forecasts faster than others.
Сomments
Add a comment
Сomments (0)
On this topic
The Dnieper hydroelectric power station can operate for another 100 years after reconstruction
In the shops "Turboatom" work continues on equipment for the Ukrainian hydro power plants
The General Director of Ukrhydroenergo inspected the work of the Kakhovka HPS
Turboatom and Electrotyazhmash discussed prospects for cooperation under Ukrhydroenergo contracts
China to build the world's most powerful hydroelectric power plant
The global hydropower sector produced a record 4,370 TWh of electricity in 2020
Recommended:
Kharkiv Turboatom delivered $750,000 worth of spare parts to Kazakh power plants in April
The assets of the largest metallurgical company in the Czech Republic are blocked under anti-Russian sanctions
Eurozone Industrial Producer Prices Up 5.3% In March
News Analytics
The largest producer of titanium raw materials in Ukraine OGCC will sell25-05-2022, 20:48
Glencore accused of bribery in London pleads guilty in the US25-05-2022, 10:44
Swiss oil and gas equipment manufacturer Sulzer leaves Russia24-05-2022, 13:08
BIR: European Commission's decision on scrap metal will be the most tragic24-05-2022, 11:41
Rejection of Russian palladium destroys markets24-05-2022, 11:41
US steel market sentiment becomes more price neutral05-05-2022, 10:15
The global high-strength steel market will grow steadily by 5% annually for the04-05-2022, 08:45
China steel inventories hit 13-month high amid COVID-19 outbreak30-04-2022, 16:38
Slowdown in global auto sector affects steel prices27-04-2022, 12:36
World alumina production reaches a record 138 million tons21-04-2022, 09:54
Sign in with: