Special vessels of the State Hydrography State Institution conducted 450 kilometers of linear survey of the bottom structure in the area of ​​the Dniester Bank in record time. 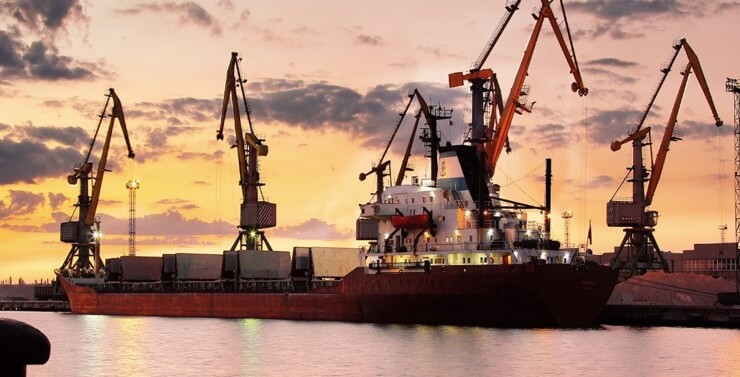 The Ministry of Infrastructure of Ukraine announced the definition of a corridor 15-22 meters deep for the safe entry of merchant ships into Ukrainian ports during the military exercises of the Russian Federation.

“Thanks to joint efforts and quick response, we prevented the blocking of the Black Sea ports of Ukraine. The corridor, determined thanks to the study, guarantees safe passage for ships along the Odessa Bay. Over the past day, we recorded uninterrupted traffic of merchant ships. Most of the ships followed the recommendations and used the sea corridor to bypass the zone of illegal military exercises of the Russian Federation,” said Oleksandr Kubrakov, Minister of Infrastructure of Ukraine.

Special vessels of the State Hydrography State Institution conducted 450 kilometers of linear survey of the bottom structure in the area of ​​the Dniester Bank in record time. Operational information based on the results of hydrographic work has already been announced in the coastal warnings of Ukraine and will be published in the Mariners' Messages.

In order to help captains more reliably plot the route of the vessel, taking into account draft and maneuvering characteristics, a large-scale inset to navigation charts with detailed information on the state of the depths in the sea corridor will be made in the near future. Also, the coordinates of virtual aids to navigation equipment are determined to clearly establish the boundaries of the sea corridor.

Recall that, on behalf of the Ministry of Infrastructure of Ukraine, State Hydrography State Institution conducted unscheduled survey work in the area of ​​the Danube Bank to search for the safe passage of ships in connection with the blocking of the recommended sea routes by the Russian Federation to the commercial ports of the Odessa Bay.

At the time of the research, the Ministry of Infrastructure recommended this route for merchant ships, thanks to which Ukrainian ports were operating normally. Bulk carrier MV Melia became the first, but not the only Panamax-class vessel that successfully navigated the new route from the port of Yuzhny.

Финансовая аналитика, прогнозы цен на сталь, железную руду, уголь и другие сырьевые товары. More news and analytics on Metallurgprom telegram channel - subscribe to get up-to-date market information and price forecasts faster than others.
Сomments
Add a comment
Сomments (0)
On this topic
Yuzhmash told whether it is possible to launch reusable rockets from the Black Sea
Ukraine has received new shunting capacities: the 4th hydroelectric unit of the Dnestrovskaya PSPP
Prospects for ship repair in Ukraine
Sea container transportations in Ukraine has grown by 20 percent exceeding million TEU
A thousand tons of equipment for the construction of the Dniester wind farm arrived in Ukraine
Call of a vessel at Ukrainian ports can now be issued by e-mail
Recommended:
The European Council added the violation of restrictive measures (sanctions) to the list of EU crimes
Dneprovsky Metallurgical Plant received almost UAH 2 billion in net profit last year
ArcelorMittal invests $25 million in nuclear technology development
News Analytics
China's iron ore output to rise in 2023 as new projects are launched30-11-2022, 18:10
"Centravis" agreed to supply a new batch of seamless pipes to a30-11-2022, 16:51
Metinvest enterprises in Ukraine resumed work after massive shelling of29-11-2022, 11:59
The European Council added the violation of restrictive measures (sanctions) to28-11-2022, 14:22
The abolition of export duty in India may reduce the price of Turkish steel28-11-2022, 14:07
Commodity prices will fall, metals quotes will rise slightly - Focus Economics28-11-2022, 13:28
Platinum market to face shortage next year - WPIC22-11-2022, 18:25
Global steel demand falls and will fall by 2.3% in 2022: WorldSteel19-10-2022, 23:12
Iron ore prices fall to 11-month low15-10-2022, 10:36
China production cuts in winter will give limited boost to steel markets -15-09-2022, 10:09
Sign in with: