In the manufacture of the vessel, 1200 tons of high-quality shipbuilding steel were used, manufactured mainly in Ukraine at the MMK and Azovstal plants of Metinvest. 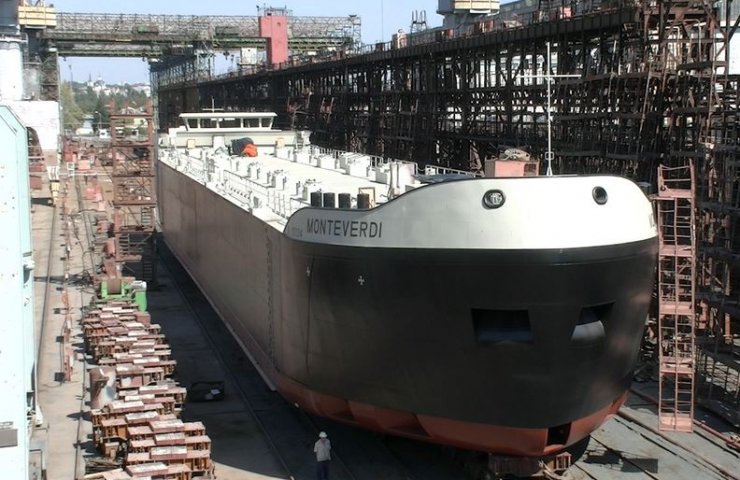 Smart Maritime Group (Kherson, SMG) on September 11 held the launching ceremony for the next saturated hull of the chemical tanker built for the Dutch company VEKA Shipbuilding WT B.V. - divisions of VEKA Group.

This order continues the line of vessels built for VEKA at SMG shipyards and is the fourth in a series.

The event, which took place at the site of the Kherson shipyard, was attended by a representative of the customer company Huig Spaargaren, representatives of the regional business and labor collective.

Svetlana Shott, Marketing Director of Smart Maritime Group, has been given the honorable mission of being the godmother of the ship and carrying out the naming convention.

Having smashed a symbolic bottle of sparkling wine on the side of a tanker, the godmother named the vessel "MONTEVERDI" in honor of the Italian composer of the early Baroque era Claudio Monteverdi and traditionally wished 7 feet under the keel.

VEKA representative Haig Spargaren said: “This is the fourth vessel from the line of the project, the construction of which we confidently entrusted to SMG. The quality of the work and the terms for which the project was completed do not raise doubts about the high professionalism of the Kherson shipyard team. In addition to contractual obligations and business relations, for so many years of joint work, we have developed warm friendly relations with the employees of your company. We look forward to further fruitful cooperation. ”

Dmitry Krasnikov, CEO of Smart Maritime Group, noted: “SMG has once again confirmed that our shipyards are capable of fulfilling orders for our European customers at the highest professional level. We are an export-oriented company that uses materials of Ukrainian origin in our production. Our team is confidently focused on attracting orders both in the domestic market and among foreign customers, providing jobs for the shipbuilding industry. We keep the position of one of the budget-forming enterprises of the region. ”

Chemical tanker "MONTEVERD" was built at the Kherson shipyard according to the CAVALLI project. The deadweight of the vessel is 5000 tons. Length - 110 m, width - 13.5 m, depth - 6.6 m. The tanker is intended for transportation of oil products and chemical goods on inland waterways of Europe.

Within the framework of the contract, the ship's hull was manufactured, the general pipeline systems were installed, the deck saturation was installed, and the hull was painted.

The order was completed in 6 months. The contract value is 2.7 million euros.

In the manufacture of the vessel, 1200 tons of high-quality shipbuilding steel were used, manufactured mainly in Ukraine at the MMK and Azovstal plants of Metinvest.

Smart Maritime Group - the largest shipbuilding company in Ukraine, which combines the shipbuilding assets of Smart-Holding: Nikolaev and Kherson shipyards. The production facilities of SMG allow to build medium-tonnage full-set ships and perform complex ship repair works. The shipyards are ordered by companies from the Netherlands, Norway, Great Britain and other countries of the world.

VEKA Shipbuilding B.V. is part of the VEKA Group shipbuilding group headquartered in Verkendam (the Netherlands). The group was founded in 1988. The company specializes in the construction and maintenance of inland navigation vessels. The company's reference list includes double-hulled chemical and bunker tankers, LPG tankers; container ships, passenger and other types of ships. VEKA operates four shipyards in the Netherlands: in Lemmer, Husden, Rotterdam and Werkendam, as well as shipyards in Eastern Europe and partly in Asia.

The history of successful partnership between SMG and VEKA Group goes back over 10 years. During this time, 12 tanker hulls were built for the company.

Финансовая аналитика, прогнозы цен на сталь, железную руду, уголь и другие сырьевые товары. More news and analytics on Metallurgprom telegram channel - subscribe to get up-to-date market information and price forecasts faster than others.
Сomments
Add a comment
Сomments (0)
On this topic
At the Kherson shipyard will build one more tanker
Smart Maritime Group, has launched the third tanker for Dutch VEKA Shipbuilding
At the Kherson shipyard SMG started cutting metal for the fourth tanker
Kherson shipyard accepted for modernization two dry cargo vessels of the Dutch EEMS Werken
What is the difference between shipyard Poland, China and Ukraine in the opinion of the Dutch
The shipbuilding business of Smart-Holding is headed by Dmitry Krasnikov
Recommended:
The state will not support the export of metals from Russia - Ministry of Industry and Trade of the Russian Federation
Russia will allocate more than $700 million for the production of domestic aircraft engines
The pipe metallurgical plant in Nikopol continued to work after a short stop
News Analytics
ArcelorMittal launches flagship carbon capture and recycling project in Belgium08-12-2022, 14:59
The South Korean government "ordered" the striking truckers to return08-12-2022, 11:04
India expands RoDTEP export incentive scheme to steel and iron08-12-2022, 10:28
Volkswagen Anhui's first pre-production NEV rolled off the assembly line08-12-2022, 10:17
Chinese steel exports up 28.2% - customs data07-12-2022, 23:43
Analysts predict 5% annual growth in the iron casting market through 203006-12-2022, 12:44
Commodity prices will fall, metals quotes will rise slightly - Focus Economics28-11-2022, 13:28
Platinum market to face shortage next year - WPIC22-11-2022, 18:25
Global steel demand falls and will fall by 2.3% in 2022: WorldSteel19-10-2022, 23:12
Iron ore prices fall to 11-month low15-10-2022, 10:36
Sign in with: