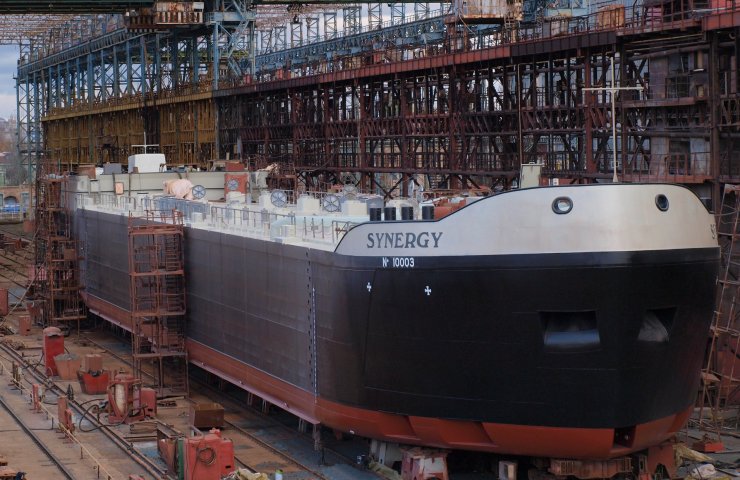 the event, held at the site of the Kherson shipyard on 28 January, was attended by the citizens, Chairman of the Kherson regional state administration Yuriy Gusev, the mayor Vladimir mikolaenko, a representative of the client company High Spaargaren (Huig Spaargaren). An honour to be the godmother of the vessel was given to chief accountant of SMG Olga of Lubenchenko. She, along with the Director of marketing for Yuri Kornienko, broke a symbolic bottle of sparkling wine on Board of "SYNERGY".

"Today we have launched the third case, but Smart Maritime group is working on the construction of a fourth similar of chemical tanker. Just yesterday in Kherson was visited by the shipowner, expressed satisfaction with what he saw and said with confidence about the plans for the construction of the fifth corps. The client took the job without comment, and I can confirm his opinion: the vessel is built very professionally. Now in Europe there is a boom in shipbuilding, so we hope for further cooperation with SMG and not only in this project", said the representative of the company VEKA High Spaargaren.

General Director of Smart Maritime Group Dmitry Krasnikov has noted that if Ukraine wants to develop shipbuilding as one of the basic industries, it definitely requires special attention from the state.

"One of the key problems of the industry today is the attraction of available financial resources for the implementation of such long-term projects. We hope that in the foreseeable future the situation will change. However, successful implementation of this contract is another confirmation of the fact that our shipyards are willing to provide services for the shipbuilding and ship repair at the highest professional level," said Krasnikov.

the chemical Tanker is "SYNERGY" is built on Kherson shipyard on the Dutch project CAVALLI. The deadweight of the vessel is 5320 tons. Length – 110 m, width – 13.5 m, height – 6.6 m. the Tanker is designed for transportation of oil products and chemical cargoes on inland water routes of Europe.

In the framework of the contract made the hull, the installation of ship piping systems, installation of deck saturation, and also body paint. The order is executed in 8 months. The contract is worth 2.5 million euros. In the manufacture of the vessel used 1200 tons of high quality shipbuilding steel, is made mostly in the mills MMK and "Azovstal" Metinvest company.

Smart Maritime group is the largest shipbuilding company in Ukraine, which unites shipbuilding assets of Smart-Holding: Nikolaev, and the Kherson shipyard. The production capacity of the SMG allows you to build medium-duty complete vessels and perform ship-repair work. Customers of shipyards are companies from the Netherlands, Norway, the UK and other countries.

Финансовая аналитика, прогнозы цен на сталь, железную руду, уголь и другие сырьевые товары. More news and analytics on Metallurgprom telegram channel - subscribe to get up-to-date market information and price forecasts faster than others.
Сomments
Add a comment
Сomments (0)
On this topic
Smart Maritime Group launched 4 tanker for the Dutch VEKA Group
At the Kherson shipyard SMG started cutting metal for the fourth tanker
What is the difference between shipyard Poland, China and Ukraine in the opinion of the Dutch
At the Kherson shipyard will build one more tanker
Kherson shipyard accepted for modernization two dry cargo vessels of the Dutch EEMS Werken
The cargo terminal at the Kherson shipyard had the opportunity to serve vessels with a draft up to
Recommended:
The United States imposed a ban on the import and sale of equipment from Huawei, ZTE and a number of other Chinese companies
The European Union has sharply increased purchases of Russian titanium
Metinvest enterprises in Ukraine resumed work after massive shelling of infrastructure
News Analytics
Analysts predict 5% annual growth in the iron casting market through 203006-12-2022, 12:44
Oman to build a new steel plant worth $3 billion in 3 years06-12-2022, 12:14
Tesla's Shanghai gigafactory set a new record for electric vehicle shipments in05-12-2022, 15:24
Sanjeev Gupta may lose control of his steel plants in Belgium05-12-2022, 13:55
Steel demand and weather in Australia will affect coking coal prices05-12-2022, 13:16
Analysts predict 5% annual growth in the iron casting market through 203006-12-2022, 12:44
Commodity prices will fall, metals quotes will rise slightly - Focus Economics28-11-2022, 13:28
Platinum market to face shortage next year - WPIC22-11-2022, 18:25
Global steel demand falls and will fall by 2.3% in 2022: WorldSteel19-10-2022, 23:12
Iron ore prices fall to 11-month low15-10-2022, 10:36
Sign in with: