Pope Francis on Sunday was attended by about 1 500 poor and homeless for lunch at the Vatican, condemning the indifference to poverty, since today the Catholic Church celebrates its world day of the poor. 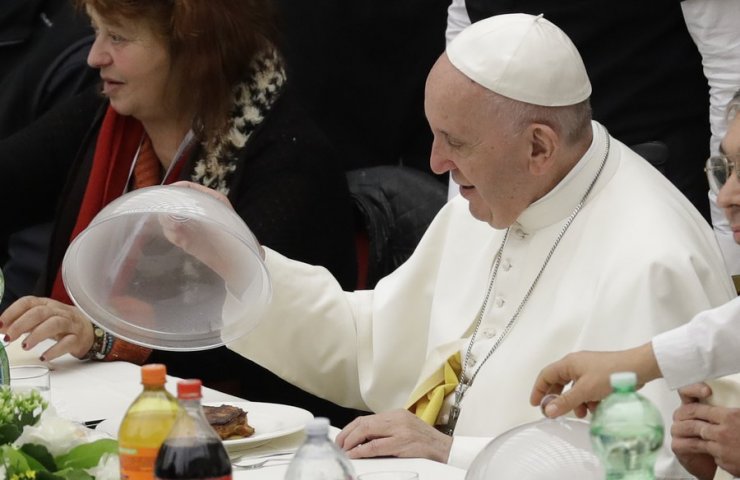 Pope Francis joined his 1 500 guests at a dinner in honor of the world day of the poor in the ornate and spacious Vatican the Paul VI hall. The menu for the homeless consisted of lasagna, chicken nuggets with cream of mushrooms and potatoes, desserts, fruit and coffee.

He condemned the indifference of society to the problems of the poor and criticized what he called the "madness of running, achieve all right now" and derogatory to the victims the bad people.

"I Recently saw some statistics about poverty. It makes you suffer - society's neglect of the poor," said dad, after thanking the nurses provided free medical assistance to the poor in the Vatican. 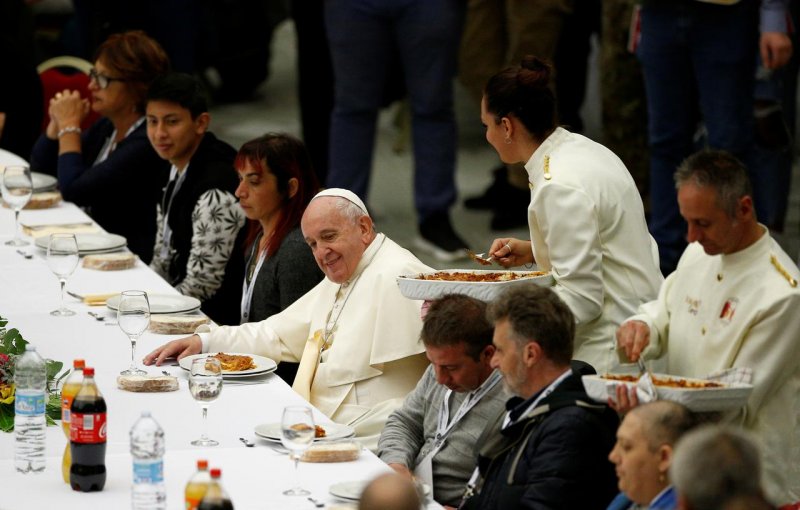 the Poor and the homeless were brought to Rome volunteers charitable groups. All last week at St. Peter's square in the Vatican was opened a mobile clinic, where volunteer doctors provided free specialized medical care to the needy.

Before lunch, during the mass, Pope Francis said that those who live better should not be "annoyed" by the poor, but to help them as much as possible. "They should ask themselves: Do I, a Christian, has at least one poor person as a friend?"

Recommended:
State Energy Efficiency together with UNECE and stakeholders discussed the possibilities of production and use of hydrogen in Ukraine
The Ministry of Environmental Protection of Ukraine has published a draft Subsoil Code
PolyMet wins Minnesota court ruling on $ 1 billion mine
On this topic
The head of the Ukrainian chamber of Commerce announced that China became a leader of the open
From Mariupol to Italy by plane: Ernest Airlines will make it a reality
New US duties against European goods began on Friday
Is the German auto industry preparing for a collapse?
Will the UK government interfere with British Steel?
Money laundering scandal leads to resignation of Swedbank chairman
Add a comment
Сomments (0)
News Analytics
Georgia's economy shrinks by 11.5% in January26-02-2021, 21:21
Ukraine retained its position in the world ranking of steel producers and rose26-02-2021, 15:52
ArcelorMittal has raised prices for galvanizing for the European market to 90026-02-2021, 13:23
The European Commission initiated a new investigation on steel imports to26-02-2021, 13:22
A rally of workers of the stopped shipyard was held in Mariupol26-02-2021, 12:34
Increase in prices is forecasted in the markets of steel raw materials -26-02-2021, 09:25
Troy ounce of gold will drop $ 500 in two years - Fitch25-02-2021, 18:29
Global iron ore production growth to outstrip cumulative production in India23-02-2021, 10:22
Fitch Ratings Warns of “Shocking Impact” on Fossil Fuel Exporters18-02-2021, 14:44
Raw material prices rise by about 10.5% in January 2021 - Deutsche Industriebank12-02-2021, 10:48
Sign in with: