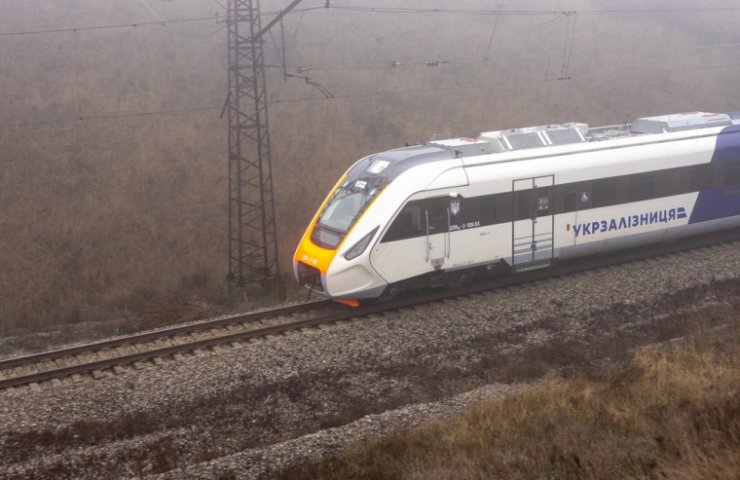 Regional diesel train GPCR-3 Krukovka carriages 23 Dec 2019 22-50 left the premises and went to a test run on the route Kremenchuk-Ternopol. On the morning of 24 December, he passed the station of Fastiv and should continue according to the established route and dispatch schedule.

Diesel train run by the machinists of the locomotive brigades of the southern railway who have been trained on Kryukovsky car-building plant. Together with them in the way of work machinist instructor, maintenance teams from kvsz, Lviv Railways Department suburban rail BONDS.

Recall that on 17 December of the current year, kvsz worked the interdepartmental Commission, which recommended that diesel train GPCR-3 for operation with passengers, and also gave permission for the release party of such trains in the amount of 6 units.

After a test mileage diesel train GPCR-3 will be in Kiev, trained for flights on the route Kiev - Borispol, the beginning of which is scheduled for the coming days.

Regional diesel train GPCR-3 consists of three cars. The train has 170 seats for passengers. In the interim first class seats located at the 2x2 scheme. Seat width at widest part not less than 490-500 mm, they are equipped with individual power sockets with USB connectors.

In head coaches of the second class the seats are built under the scheme 3x2. Seat width at widest part not less than 450 mm. In the cold season it is planned to use liquid heaters: only six - two for each car. Also provided and heated cabin, which will provide savings of diesel fuel and pre-heating of the cabin before entering the landing on cold days.

Previously it was about the delivery of Ukrzaliznytsya six diesel trains kvsz. Later it became known that UZ will be able to buy in 2019 only one such train. The draft financial plan of JSC "Ukrzaliznytsya" for 2020 purchase of any regional diesel trains are planned.

Recommended:
The State Space Agency of Ukraine has identified 6 key objectives of the space program
Chinese probe "Tianwen-1 " entered orbit around Mars
Interpipe starts supplying pipe products to Qatar Petroleum
On this topic
Kryukovsky railway car building works connected Union bosses to fight for government contracts
The Venice Commission has recommended Ukraine to protect Russian to change language law
Top Manager kvsz called calls privacy office minifrastruktury to Hyundai "unpatriotic"
Ukrzaliznytsia puts 100% of all orders of services in freight transport in ProZorro
The government fired the management of the Railways because of suspicions of corruption
In Kharkov, the metro station "Moskovsky Prospekt" was renamed into "Turboatom"
Add a comment
Сomments (0)
News Analytics
US Senate Adopts $ 1.9 Trillion Stimulus Package06-03-2021, 23:54
Tibet invests about $ 30 billion in infrastructure projects in 5 years06-03-2021, 14:39
Siemens Energy promised Deutsche Welle to closely monitor democracy in Belarus06-03-2021, 10:32
US and EU suspend the collection of duties that were imposed against each other05-03-2021, 22:48
Turboatom and Electrotyazhmash discussed prospects for cooperation under05-03-2021, 19:04
Spread between raw materials and high strength alloy steel in Europe increased01-03-2021, 20:21
Increase in prices is forecasted in the markets of steel raw materials -26-02-2021, 09:25
Troy ounce of gold will drop $ 500 in two years - Fitch25-02-2021, 18:29
Global iron ore production growth to outstrip cumulative production in India23-02-2021, 10:22
Fitch Ratings Warns of “Shocking Impact” on Fossil Fuel Exporters18-02-2021, 14:44
Sign in with: