Countries-NATO members pooled their resources to Charter special aircraft that give the Alliance the capability to transport troops, equipment and materials around the world. 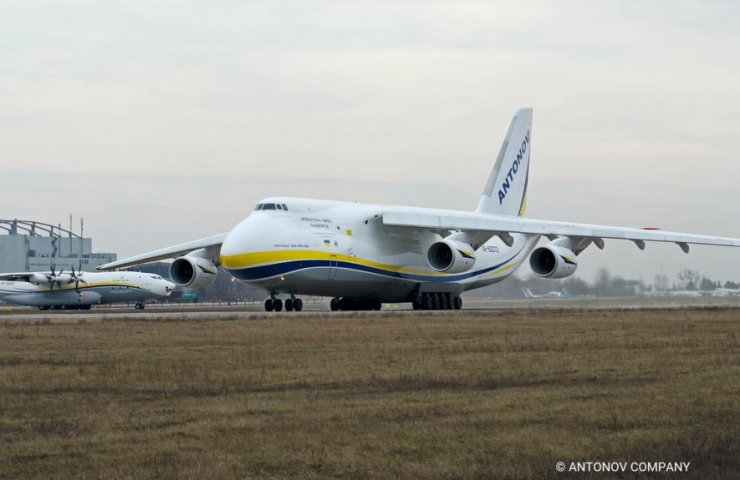 To the ANTONOV company received a letter from the head of the project Means the strategic transportation of NATO (Strategic Airlift Interim Solution, SALIS), in which he expresses gratitude to the staff of "Antonov" company and emphasizes the contribution of the President of the enterprise O. D. Donets in effective work to provide strategic air transport in the past year. About it announced in a press-service of ANTONOV company.

In particular, the letter States: "the Survey, conducted by NSPA (NATO Support and Procurement Agency), confirmed that the members of the SALIS programme are fully satisfied with the execution of their orders. Thank you for your great support and expressed confidence in further development of this mutually beneficial cooperation".

we will Remind, GP "ANTONOV" provides services for organization of strategic transportation of NATO SALIS programme, starting in 2006. Last year was awarded another contract for a term until 31 December 2021. Under this agreement, starting from 1 January 2019, the ANTONOV company provides 2 aircraft An-124-100 on an ongoing basis for the operation of air services in the interests of the participants of the SALIS program.

In General, SALIS provides assured access to six An-124-100 (ready to fly for nine days in the event of a crisis) to support the military operations of NATO and the European Union. The SALIS contract provides two Antonov aircraft An-124-100 Charter, another two for six days and two to nine days. The countries of the consortium has pledged to use the aircraft not less than 1 600 flight hours per year.

In December 2016, the Agency for the support and procurement of NATO (NSPA) has signed two contracts with two companies based at the airport Leipzig-Halle, Germany (Antonov SALIS Gmbh Ruslan SALIS Gmbh). In accordance with these contracts the countries participating in the SALIS provides access to strategic airlift, oversized cargo based on an agreed quota of flying hours per year.

Single Antonov an-124-100 can carry up to 120 tons of cargo. Participating countries SALIS in the past used Antonov aircraft to transport equipment to and from Afghanistan, deliver aid to victims of the earthquake in Pakistan in October 2005, and airlift African Union peacekeepers to Darfur and back.

Recommended:
Ukraine will increase imports of diesel fuel from Lithuania, Hungary and Turkey - Ministry of Economy
Metallurgists of Kryvyi Rih celebrate May 1 with protests in the city center
European Metallurgical Association Eurofer Seeks Restrictions on Scrap Metal Exports
On this topic
In the canadian office of ICAO, a model of the Ukrainian aircraft An-225 "Mriya"
The economy for the first time joined the work of the Commission Ukraine-NATO
At ArcelorMittal Kryvyi Rih with the new year will be the new CEO
Britain, France and Germany have accused Iran of developing nuclear weapons
"Antonov" and "KLEYNOD" will create a collection of designer hours
Armenian NPP thanks Turboatom for modernization
Add a comment
Сomments (0)
News Analytics
Volodymyr Zelenskyy signed a law to extend the export duty on ferrous scrap16-05-2021, 09:29
China's Tianwen 1 spacecraft successfully landed on Mars15-05-2021, 12:56
British law enforcement officials accused Liberty Steel and GFG Alliance of15-05-2021, 12:03
Chip shortage will cost the global auto industry $ 110 billion in revenue in14-05-2021, 12:15
Zaporizhzhya Dneprospetsstal expands international partnership14-05-2021, 11:17
The current state of the market is ideal for the sale of rolled steel - IREPAS04-05-2021, 18:41
Global hydrogen demand to grow 7-fold by 2070 - PwC21-04-2021, 12:31
World Steel Association predicts a good year for metallurgists15-04-2021, 18:19
World Steel Association defines green steel and its variations12-04-2021, 13:14
China unlikely to cut steel capacity in 2021 due to high steel prices07-04-2021, 12:11
Sign in with: