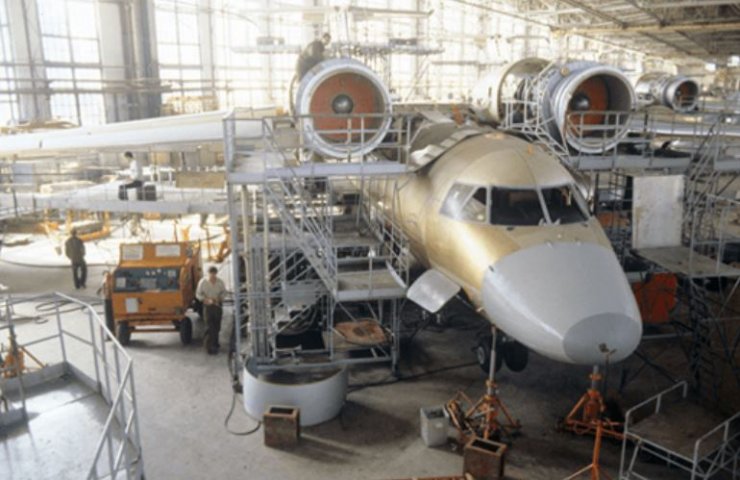 As it became known to the Canadian edition of Le Devoir, the manufacturer of the largest aircraft on the planet, the Ukrainian industrial giant Antonov, wants to design and conduct the final assembly of a model of the An-74 cargo aircraft in Quebec.

“Without further ado, this leading corporation set up a Canadian subsidiary in March and is now seeking political and financial support from the Quebec government to start a business in the province.” - writes Le Devoir.

In March, the Ukrainian state-owned company created its Canadian subsidiary, Antonov Aircraft Canada, which is headquartered in downtown Montreal and is now trying to lay the foundation for formal cooperation between the Ukrainian government and the Quebec Ministry of Economy and Innovation to be able to design and assemble a cargo plane in the province, according to a Canadian newspaper.

Developed in the late 1970s, the An-74 is a twin-engine cargo plane capable of flying up to 4600 kilometers at a speed of 560 km /h. The Ukrainian company believes that the Canadian market will be promising for the An-74. “Take the Quebec area, for example, it's huge, and the only way to get to [and supply] certain regions is by plane,” says Desmond Burke Devoire, director of Gold Leaf Aviation, an Ontario-based company that represents Antonov's interests in Canada. /p>

Although Mr. Burke uses the term "business aircraft", the AN-74 is nevertheless a cargo aircraft that has been used mainly for the transport of heavy cargo for military purposes. The air forces of Russia, Egypt, Kazakhstan and Iran have such aircraft in their fleets. In January, the Ukrainian government announced its desire to resume production of the An-74 and add it to its fleet.

Antonov's interest in Quebec goes beyond aeronautics, as the company is also present in the railway sector: it also wants to get the support of the Quebec government and win tenders in Ukraine from Ukrzaliznytsia, the state-owned company that operates the country's railway network and intends to modernize its own fleet of wagons, the message says.

According to Suzanne M. Benoit, president of Aéro Montréal, Quebec's aerospace industrial cluster, certification of an aircraft with Transport Canada could be a big problem. “This is a very expensive process,” she notes. “We are always trying to find aircraft manufacturers. Despite the fact that Antonov does not have Airbus status, they have a lot of experience in the field of aircraft construction in Ukraine. ”

In Ukraine, AN-74s are currently being assembled at the Kharkov Aviation Plant. At the end of 2019, it was reported that Canadian companies plan to modernize aircraft produced in Kharkov, and Canadian investments in the "upgrade" and certification of the aircraft could amount to about $ 250 million.

Финансовая аналитика, прогнозы цен на сталь, железную руду, уголь и другие сырьевые товары. More news and analytics on Metallurgprom telegram channel - subscribe to get up-to-date market information and price forecasts faster than others.
Сomments
Add a comment
Сomments (0)
On this topic
Ukroboronprom confirmed the intentions of Antonov State Enterprise to start production of aircraft
NATO expressed gratitude to the state enterprise "ANTONOV" for the work in the framework
"Ukroboronprom" introduces to "Antonov" Supervisory Board
Lutsk Automobile Plant of Bogdan Motors Corporation has shipped the first of ten buses ordered by
Guide Dreamlifts Ltd decided not to renew the cooperation with the Antonov company
"Antonov" and "KLEYNOD" will create a collection of designer hours
Recommended:
Ukrainian coking plants reduced gross coke production by 55.2%
The production of passenger cars in Russia decreased by 2.8 times in eight months
Nippon Steel raises steel prices to a record high for deliveries to Toyota plants
News Analytics
The production of passenger cars in Russia decreased by 2.8 times in eight29-09-2022, 11:19
Donetsk and Torez electrotechnical plants will start producing electrical29-09-2022, 11:37
Ukrainian coking plants reduced gross coke production by 55.2%29-09-2022, 11:28
China ramps up investment in transport to bolster economy29-09-2022, 11:33
The heads of mining companies named the main risks for business29-09-2022, 10:03
China production cuts in winter will give limited boost to steel markets -15-09-2022, 10:09
Steel prices may rise as manufacturers stop production11-09-2022, 14:06
IREPAS: The global long products market is in a "dramatic situation"10-09-2022, 20:49
Steel prices are unlikely to rise significantly in the near future - analysts02-09-2022, 22:58
Steel prices may move up on new data from China31-08-2022, 12:19
Sign in with: