As of the lining of coverture on the Mariupol metallurgical combine began to test with a digital scanner, a British company Vesuvius Process Metrix. 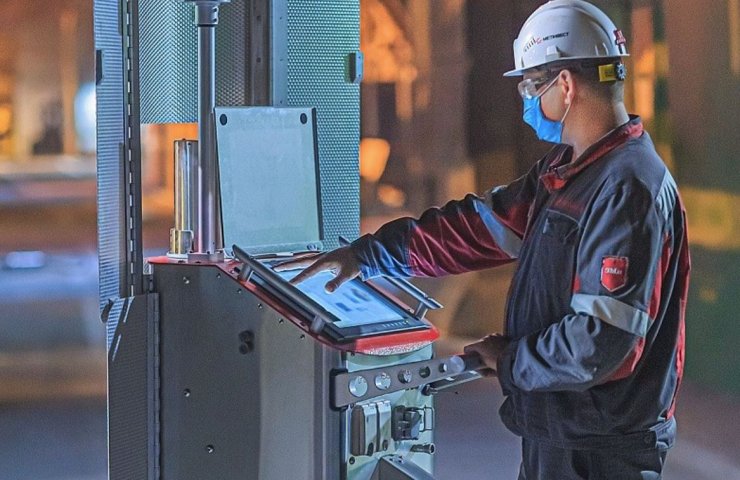 In the Converter shop of metallurgical plant Azovstal group Metinvest has launched a new scanner lining of the Converter Process Metrix, which analyzes her condition in less than 8 minutes.

Investing in the purchase of a new scanner has made more than 9 million hryvnias.

Scanners older generation performed diagnostics of the lining in 22 minutes longer now to check will leave a of 7.32 minutes. This is due to the more rapid positioning of the scanner due to the installed "beacons" to determine the angle of inclination of the Converter, and use a modern CPU.

Experts of the Converter shop said that to work with the new device much easier. First, determine the position of the armor Converter, to this end, during the preparatory work on each Converter mounted beacons and scanned them without the lining. Due to this, the device is pushed from the data source and finds himself in space, and you don't have to put it to the nearest centimeter.

After making the lining of the Converter, the device already knows where the armor is, and measures the distance between the armour and the lining layer, the thickness of the analyses and reports the results to the monitor color chart: gamma green – all okay, red – interventions are needed to care for a lining.

Converter – metallurgical units for the production of steel by blowing molten iron with air or oxygen. In the Bessemer process uses acidic lining, and Thomas main. Compared with the Bessemer, Thomas process allows for the efficient removal of phosphorus from phosphorous cast irons by the method of oxidation. In the 70-ies of XX century, the Bessemer and Thomas processes have been replaced by basic-oxygen process.

the Converter Lining is done in two or three layers. The inner layer is of a thickness of 500-750 mm is called a work. It is made of impregnated dehydrated coal tar dolomite or magnesite bricks. When roasting a new lining of volatiles from the resin is removed and remains the cementing of the coke residue to reduce erosion of the lining of slag. Working layer wears out in the process, under the influence of thermal stress (due to fluctuations in high temperature), under the influence of shock pieces of the charge, especially large pieces of scrap metal, and also as a result of chemical interaction with the slag. The resistance of the working layer is 400-800 heats. The outer layer of the lining is called the reinforcement and completion of magnesite brick or magnesiochromite 110-250 mm. thickness of This layer is directly adjacent to the casing and does not require replacement during the repairs. Between work and reinforcing layers is usually done the gasket from the mass, the chemical composition of the respective working layer. The thickness of the gasket 50 to 100 mm.