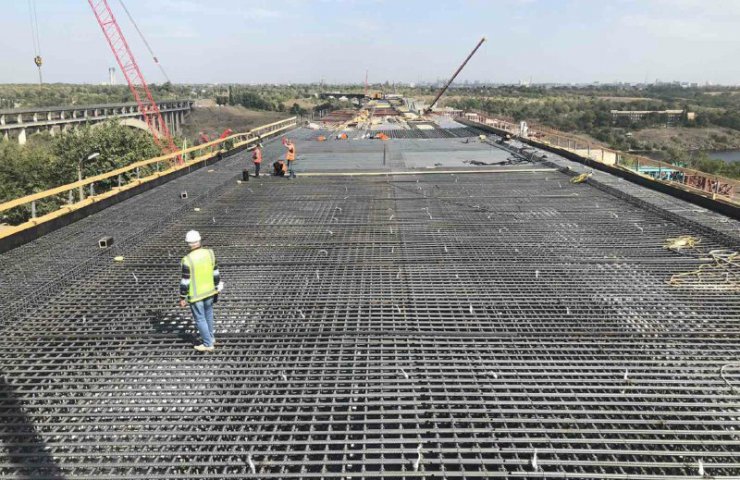 Since June this year, "ArcelorMittal Kryvyi Rih" has already supplied 1.3 thousand tons of reinforcing bars, which is about 50% of the total need for the construction of a bridge across the river. Dnieper in Zaporozhye - one of the largest infrastructure facilities in Ukraine. The resumption of construction on this famous long-term construction began in April 2020, and the company has become a key supplier of A400 class A-III fittings with diameters from 12 to 32 mm (steel grade 25G2S).

According to preliminary estimates, the total demand for the entire facility will amount to 3-4 thousand tons of rolled steel in accordance with GOST 5781, which is produced in the country only by ArcelorMittal Kryvyi Rih. According to the project, the Zaporozhye Bridge is a highway of continuous traffic with a length of more than 9 kilometers, consisting of six traffic interchanges. They include 27 artificial structures, including two bridges with separate structures for each direction of movement. The State Agency for Roads of Ukraine plans to complete the construction in 2022, and by the end of this year, to launch traffic on the first stage of the Zaporizhzhya bridge (Baburka village - Khortytsya island). The entire project costs 12 billion hryvnia.

- For 15 years of ArcelorMittal's operation in Ukraine, we have shipped about 14.5 million tons of metal products for buyers in the domestic market. And now the company is proudly taking part in such a large-scale construction, which is watched by the whole country. The Zaporizhzhya bridge is necessary both for the development of Zaporozhye itself, and for the entire population of Ukraine, because it plays an important role in the movement of residents from north to south and east of the country. For us, this is far from the first experience of cooperation with the state, when we offer our super-strong and high-quality steel for the construction of objects that require special reliability and stability. As you know, almost all bridges and overpasses in Ukraine were built in 1950-1970. last century. They have definitely exhausted their resource and need to be updated, like most of the Ukrainian roads. Aware of the government's ambitious construction plans, ArcelorMittal Kryvyi Rih is doing everything to ensure stable production and timely deliveries of steel products, even in crisis conditions and unexpected challenges for the whole world in 2020.

In 2018-2019 the enterprise has delivered a total of 13 thousand tons of reinforcing bars for the construction and reconstruction of various bridges in Ukraine - in Kiev, Poltava, Dnepropetrovsk and other regions. This year "ArcelorMittal Kryvyi Rih" is also a participant in the construction of the bridge in the village. Krushelnitsa of the Skole district of the Lviv region. The company has already supplied 30 tons of metal products for the construction of a bridge on the section of the Skhidnitsa - Verkhne Sinevidnoe highway. On public roads of local importance, this bridge will be the longest in western Ukraine. The project cost is over 60 million hryvnia.

The most critical infrastructure facilities such as bridges, dams, modern skyscrapers, wind farms are being built using metal products manufactured by ArcelorMittal Kryvyi Rih. The new protective sarcophagus in Chernobyl (the Shelter object at the Chernobyl NPP) was built from the enterprise's fittings. On the eve of the EURO 2012 football championship, the company's products were used in the construction of key sports facilities and airports in Ukraine: the Olimpiyskiy National Sports Complex and the new Terminal D of the Boryspil International Airport (Kiev), the Arena Lviv Stadium and the Lviv International Airport them. Daniil Galitsky. Using the metal products produced at the enterprise, unique structures are created all over the world - for example, the complex of skyscrapers "Flame Towers" (the national symbol of Azerbaijan) or the tallest skyscraper in the world - Burj Khalifa in Dubai (its height is 828 m, it is 163 floors).

Recommended:
EU trade head favors alternative steel tariff deal with US
The capacity of private solar power plants in Ukraine approached 1 gigawatt
Ukrainian metallurgists demand from the authorities to introduce a ban on the export of scrap metal for 3 years
On this topic
President of Ukraine Volodymyr Zelensky visited ArcelorMittal Kryvyi Rih for the first time
Yuzhmash told whether it is possible to launch reusable rockets from the Black Sea
"ArcelorMittal Kryvyi Rih" supplies metal products for the construction of a bridge across the
DMK started making steel rebar diameter: 8 mm
"ArcelorMittal Kryvyi Rih" has started hot testing solernou line at light-section mill No. 250-4
Tender announced for construction of two bridges across the Dnieper in Zaporizhia
Partner news
Сomments
Add a comment
Сomments (0)
News Analytics
Azerbaijan's SOCAR plans to invest in the extraction of battery metals in26-07-2021, 22:00
The first domestic industrial energy storage system was developed and launched26-07-2021, 22:11
The profitability of purchases of scrap metal in Ukraine has decreased, but is26-07-2021, 17:27
Metinvest is ready to pay more than 9 billion hryvnia for the Dnieper steel26-07-2021, 13:01
Cherkassk Azot by Dmitry Firtash completed the modernization of the ammonia26-07-2021, 13:45
On the regional markets of metallurgical products, prices are balancing in a22-07-2021, 16:22
Demand for armaments will ensure a stable growth of armored steel sales by 4%20-07-2021, 10:10
Protectionist Measures Support European Steel Prices Despite Summer Lull19-07-2021, 11:02
Positive price growth is observed in the markets for metallurgical products16-07-2021, 14:12
European steel market is in confusion: price growth has slowed down, but no one21-06-2021, 17:40