The construction of a tailing dump for storing tailings is necessary "in connection with the achievement of the boundaries of the economic feasibility of their expansion by the existing tailing dumps ". 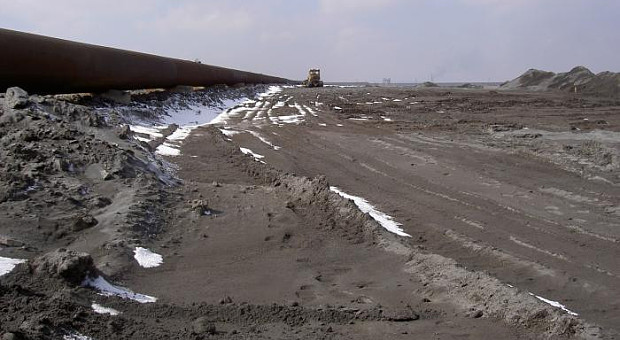 "The State Environmental Inspection of the Pridneprovsky District filed a statement of claim with the court about the enterprise's failure to comply with the order issued by the inspectors during the inspection on March 4-18, " - said the chairman of the SEI Andrei Malyovany, quoted by the press service of the department.

At the same time, he clarified that it is about the AMKR's failure to conduct an additional EIA for the construction of a new tailing dump "III map ". "The obligation to carry out such an assessment is given in the environmental conditions of the EIA conclusions. During the inspection, the inspectors issued an order to carry out the appropriate procedure, but during the control measures on March 23, its failure was recorded, " Malyovany said.

According to him, according to the law "On Environmental Impact Assessment ", the enterprise cannot build capacities in violation of the EIA requirements. At the same time, work on the construction of the tailing dump "Map III " has already begun - the fertile soil layer has been removed.

"Therefore, the State Environmental Inspection in court will demand the termination of the construction of the AMKR of this facility. I will keep the trial under personal control, " the head of the department emphasized.

As reported, "ArcelorMittal Kryvyi Rih " intends to build another tailing dump - "III card " - a special hydraulic structure that is used to dispose of enrichment waste. According to the documentation at the disposal of the agency "Interfax-Ukraine", the planned activity is the construction of a tailing dump "III card" on the territory of Grechanopodovsky and Novolatovsky village councils of the Shirokovsky district of the Dnipropetrovsk region. The construction of a tailing dump for storing tailings is necessary "in connection with the achievement of the boundaries of the economic feasibility of their expansion by the existing tailing dumps ".

AMKR currently operates three tailing dumps, in two of which - "Mirolyubovka " and "United. Fourth map " - the enterprise plans to invest in 2020-2024 about $ 50 million. In the third tailing dump "Central " "the company has already invested over $ 15 million, having completed construction up to +90 meters in 2017 (now +95 meters). The AMKR will spend the same amount on its expansion to the elevation of +115 m (this work is planned for the next seven years).

General Director of "ArcelorMittal Kryvyi Rih " Mauro Longobardo, in an interview with a corporate publication in March 2020, said that the company intends to invest in long-term projects. "We will try to improve the situation in the mining department of the enterprise, because it is key in our business. We will build tailing dumps there, which will be enough for us for at least another 20 years, " the top manager said at the time. p>

However, in the company's press release dated March 19, 2021, Longobardo pointed out the delay in issuing permits.

"Unfortunately, since the beginning of 2021, AMKR has faced a number of new challenges. So, for the third month already, the company has been waiting for permits from the Ministry of Environmental Protection and Natural Resources of Ukraine. The sinter plant of the metal production is now idle. The downtime of the sinter shop negatively affects the overall level of production - this may also entail a further shutdown of production capacities in all redistributions with corresponding consequences for a significant part of the personnel. to ensure an increase in the well-being of our people and the successful work of the AMKR in the future, "said the top manager.

"ArcelorMittal Kryvyi Rih " is the largest manufacturer of rolled steel in Ukraine. It specializes in the production of long products, in particular, rebar and wire rod.