The biomineration experiment on the International Space Station demonstrates the extraction of rare earth elements in the microgravity and gravity of Mars. 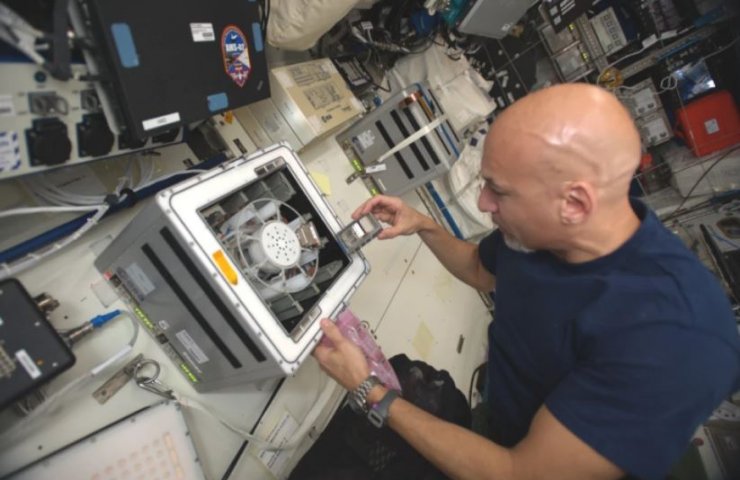 In a new article, published in the journal Nature Communications, it is suggested that bacteria can extract useful materials from rocks on Mars and the Moon and open the way for new technologies that will help humans explore new worlds and establish settlements there.

The study is based on tests carried out by astronauts on the International Space Station, which received 18 matchbox-sized mine devices - called bioprocessing reactors - sent by researchers from the University of Edinburgh aboard a SpaceX rocket launched from Cape Canaveral in Florida, USA, in July 2019.

Small pieces of basalt, a rock commonly found on Earth's natural satellite and Mars, were loaded into each device and immersed in a bacterial solution for three weeks under zero gravity.

The team's findings indicate that bacteria can improve the extraction of rare earth elements from basalt in lunar and Martian landscapes by about 400%.

“Our experiments confirm the scientific and technical feasibility of biologically enhanced mining of elementary resources in the solar system,” said Charles Cockell, lead author of the article. “While it is not economically feasible to mine these elements in space and bring them to Earth, space bio-mining has the potential to support a self-sustaining human presence in space.”

According to Cockell, the experiment shows that it is possible to build robotic and manned mines on the Moon in the Ocean of Storms region, where there are rocks with a high content of rare earths.

"This could become one of the fruitful areas of scientific and economic development of mankind beyond the Earth," - said the scientist.

Recommended:
Metinvest promised to consider Mariupol's proposal to build a university
Is there copper in Ukraine and where does it lie?
China's Non-Ferrous Metals Sector Records High First Quarter Profits
On this topic
Launch vehicle "Antares" is carrying a new toilet for the crew to the ISS
Yuzhmash told whether it is possible to launch reusable rockets from the Black Sea
Virgin Galactic has signed an agreement with NASA on the delivery of the ISS commercial passengers
YUZHMASH company congratulated SpaceX on the successful launch of the spacecraft Crew Dragon
NASA paid Russia four billion dollars for the ISS flight
Experts confirmed the high level of environmental safety of the pond-evaporator plant in utlyukskom
Add a comment
Сomments (0)
News Analytics
China's Non-Ferrous Metals Sector Records High First Quarter Profits08-05-2021, 15:43
Copper price rises to a record high08-05-2021, 10:17
Dneprotyazhmash manufactures technological equipment for DMK07-05-2021, 10:07
The National Bank of Ukraine will sell 46 tons of scrap metal from obsolete07-05-2021, 10:10
Dnieper Metallurgical Plant DCH Steel in April reduced steel production by 2.8%07-05-2021, 09:18
The current state of the market is ideal for the sale of rolled steel - IREPAS04-05-2021, 18:41
Global hydrogen demand to grow 7-fold by 2070 - PwC21-04-2021, 12:31
World Steel Association predicts a good year for metallurgists15-04-2021, 18:19
World Steel Association defines green steel and its variations12-04-2021, 13:14
China unlikely to cut steel capacity in 2021 due to high steel prices07-04-2021, 12:11
Sign in with: