EffiShunter 1600 diesel locomotives are optimized for shunting and heavy work on industrial branches, in particular in the metallurgical and mining industries. 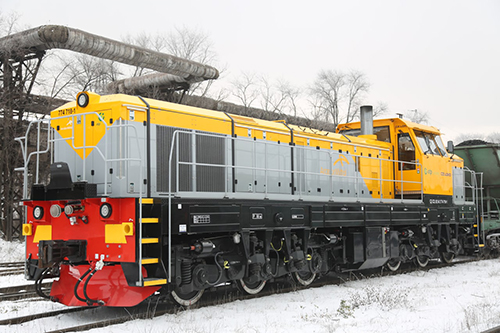 ArcelorMittal Kryvyi Rih received and commissioned the first of four shunting locomotives EffiShunter 1600 manufactured by the Czech company CZ Loko. The first machine arrived in Kryvyi Rih in December 2020, after which Czech specialists conducted online training for the company's personnel. In accordance with the contract signed in the summer of 2019, the company acquires all four EffiShunter 1600 locomotives under a financial lease scheme. The total amount of the contract is 7.5 million euros.

- ArcelorMittal Kryvyi Rih was the first in Ukraine to start using Czech locomotives of a new generation. It is planned that the first two of the four CZ Loko locomotives will be involved in the transportation of raw materials for our largest blast furnace No. 9. The second locomotive from this batch has also recently arrived in Krivoy Rog, we are preparing the machine and components for commissioning. Arrival of two more locomotives from CZ Loko is expected in 2021. We hope that quarantine restrictions in European countries will not change our delivery plans too much.

EffiShunter 1600 diesel locomotives are optimized for shunting and heavy work on industrial lines, in particular in the metallurgical and mining industries. These are modern machines equipped with a Caterpillar diesel engine with a capacity of 1,550 kilowatts and a Siemens traction generator. They are equipped with a digital control system, cruise control, electrodynamic brakes and anti-slip (when pulling). The advantages of these locomotives are high reliability and sound insulation, environmental friendliness, good visibility, and safe service.

The purchase of new diesel locomotives, along with their modernization and refurbishment, enable ArcelorMittal Kryvyi Rih to build up an efficient rail fleet. Since 2018, the enterprise has begun to install diesel engines of well-known world companies on its diesel locomotives - the American Cummins, the Anglo-Belgian corporation ABC, etc. So, in 2018–2020. ArcelorMittal Kryvyi Rih was able to restore more than 40 diesel locomotives, including replacement of engines and deep modernization. In total, the company has already allocated over UAH 370 million for its locomotive restoration program.

Recommended:
Metinvest mastered 54 new types of metal products in 2020
Interpipe and DTEK signed agreements with the UAE State Investment Fund
IMF wants more progress from Ukraine on new tranche
On this topic
Steel production in September 2020
Ukrzaliznytsia will spend about 5 billion hryvnia in 2021 on repairs of diesel locomotives
Yuzhmash told whether it is possible to launch reusable rockets from the Black Sea
ArcelorMittal Kryvyi Rih said about import substitution and the fight against Russian sanctions
Railways in 2020 will buy the 40 locomotives General Electric
"ArcelorMittal Kryvyi Rih" got the first in Ukraine modernized mainline locomotive
Add a comment
Сomments (0)
News Analytics
Canada's economy plunges record 5.4% in 202002-03-2021, 21:42
UN Secretary General has called coal mines a past, from which it is time to02-03-2021, 20:44
Metallurgical enterprises of Ukraine increased earnings from the export of02-03-2021, 19:50
Trade union committee "Azovstal" received an answer to the question about the02-03-2021, 18:39
Greenhouse gas emissions returned and exceeded levels prior to the pandemic -02-03-2021, 14:16
Spread between raw materials and high strength alloy steel in Europe increased01-03-2021, 20:21
Increase in prices is forecasted in the markets of steel raw materials -26-02-2021, 09:25
Troy ounce of gold will drop $ 500 in two years - Fitch25-02-2021, 18:29
Global iron ore production growth to outstrip cumulative production in India23-02-2021, 10:22
Fitch Ratings Warns of “Shocking Impact” on Fossil Fuel Exporters18-02-2021, 14:44
Sign in with: