In connection with the blocking of berths, the Azov shipyard announced a possible bankruptcy. About 600 employees of the company were threatened with dismissal. 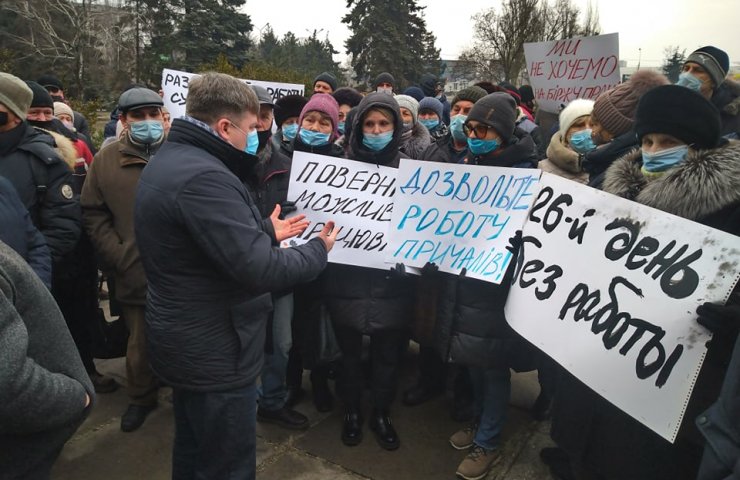 Under the building of the city administration, where the 4th plenary meeting of the Mariupol City Council of the eighth convocation is taking place, a peaceful rally of workers of the Azov Shipyard (ASRZ) took place, demanding to resume the work of the enterprise.

By according to the press service of the enterprise, the ASRZ activity was suspended by order of the captain of the Mariupol seaport, adopted on February 1 due to the expiration of the permitting documents of the Shipping Register of Ukraine (issued for until 31.12.2019).

As a result, 560 people were left without work. Rinat Akhmetov's energy holding DTEK threatens to cut off electricity to the enterprise on February 26 for debts.

"A number of strategic state and military facilities are under the threat of blackout, as well as the risk of a man-made catastrophe in the event of the termination of support for the vital activity of objects of increased danger of environmental and military significance," the press service of the ASRZ said.

Yesterday employees of the shipyard blocked the road in the Primorsky district as a protest action, trying to draw the attention of the city public to their problem.

The Azov Shipyard is the largest ship repair company in the Azov Sea, specializing in mechanical engineering, shipbuilding, ship repair, and cargo handling. In 2020 alone, the company repaired 33 vessels, including the vessels of the fleet of the port Berdyansk sea trade port and the Berdyansk branch of the USPA, the Mariupol sea trade port and the Mariupol branch of the USPA, the State Enterprise Delta Pilot, the ship-boat crew of the sea guard, the Armed Forces of Ukraine, the bases of which are located in The Azov sea. Also, 24 grabs (mechanical engineering products) were manufactured, 250.5 thousand tons of cargo were handled.

Recommended:
ArcelorMittal Kryvyi Rih is not ready to increase salaries of employees by 30%
Shooting of a French film with the tentative title "Earth" has begun at Severny GOK in Ukraine
State Enterprise "Ukrhimtransammiak" exceeded the plan for the transit transportation of ammonia by 17.8%
On this topic
The holding company of Rinat Akhmetov threatened to sue Sergei Leshchenko
DTEK is ready from may 15 to resume work Pavlogradugol under the condition of stabilization in the
Stopped nuclear power plants and mines. What's going on in the energy sector of Ukraine?
DTEK because of the crisis in the energy sector stopped the largest coal producing company in
Fitch reversed the default DTEK energy Rinat Akhmetov
DTEK: CADLO exported 3.2 million tons of coal to Europe
Add a comment
Сomments (0)
News Analytics
Three European delegations visited the Mariupol commercial port in two days22-04-2021, 14:23
ArcelorMittal is the best employer in the MMC of Ukraine in 2021 - research22-04-2021, 14:28
US pledges to halve emissions by 2030 as part of renewed fight against global22-04-2021, 14:52
ArcelorMittal Raises Hot Rolled Steel Prices in Europe Above € 1,000 /Ton22-04-2021, 13:24
Chinese subway cars begin operational tests in Chicago22-04-2021, 13:44
Global hydrogen demand to grow 7-fold by 2070 - PwC21-04-2021, 12:31
World Steel Association predicts a good year for metallurgists15-04-2021, 18:19
World Steel Association defines green steel and its variations12-04-2021, 13:14
China unlikely to cut steel capacity in 2021 due to high steel prices07-04-2021, 12:11
Scrap metal market at the beginning of April02-04-2021, 11:10
Sign in with: