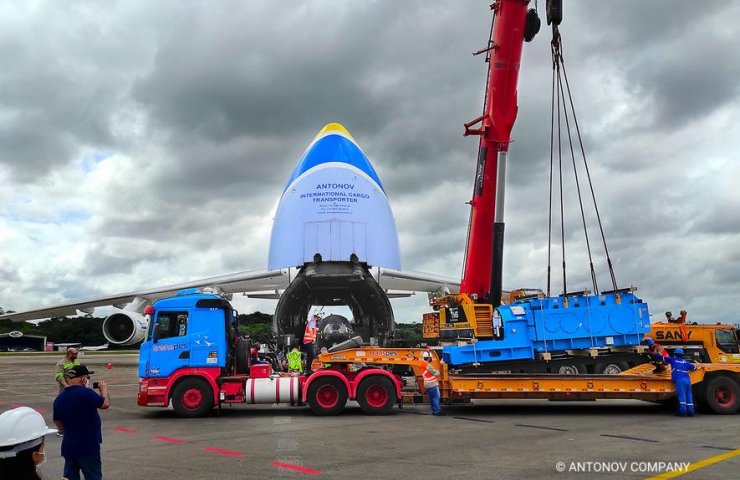 Three Antonov Airlines An-124-100 planes delivered 370 tons of tunneling equipment from Australia to ensure the continued operation of a mining mine in Brazil.

Antonov engineers have developed special frames for transporting parts of this equipment. During loading and unloading, the procedures developed by the company's specialists for the transportation of oversized cargo were used.

The shipments ordered by Chapman Freeborn had to make numerous technical stops due to the total weight of the cargo, pandemic restrictions and crew rest.

Rapid tests for COVID-19 were carried out during each of the intermediate stops, which lasted 14 hours, before completing the next leg of the flight.

Antonov State Enterprise delivered the cargo on time, which made it possible to install new equipment on mining machines and continue the safe and efficient operation of the mine in Brazil.

In particular, the following items were transported: a giant drill shaft and a transport pipe required to modernize equipment at the final destination, ensuring minimal downtime.

“The work schedule was challenging - initially our flight plan was only six days, but we needed to extend it to nine days. This was due to the careful planning of the transportation and the necessary changes to some sections of the route to avoid delays and closed airfields, ”said Ana Boccini, cargo broker for Chapman Freeborn.

Vladimir Goncharov, a commercial transportation specialist at Antonov Airlines, said: “It was a complex project that we had to implement in a fairly tough time frame. The use of three An-124-100 aircraft to fulfill the order allowed us to successfully carry out this round-the-world delivery. The deal was a success thanks to the effective collaboration between Antonov Airlines and Chapman Freeborn.

The demand for air cargo services by Antonov Airlines aircraft remains at a high level. At the same time, some of the air travel projects were postponed in 2020 due to the coronavirus pandemic.

“Last year was not easy. However, for our airline, which specializes in cargo transportation, it has become a record in its entire history. The total annual flight time of our An-124 Ruslan fleet has reached almost 8000 hours. We consider every performed flight our success. During the year, the airline SE "Antonov" performed them more than half a thousand only with An-124-100 aircraft (excluding other types of aircraft). And this is where teamwork is important. Thus, the tight work schedule and quarantine restrictions on flights have tested the spirit of our flight crews and technical teams on board. These were many hours of work and waiting on board the aircraft during loading and unloading without the opportunity to leave the board for a rest at the hotel. At the same time, all other divisions of the airline - commercial, flight planning and control, cargo placement planning, ground support, flight and technical services, and an airfield - worked intensively and selflessly throughout the year to ensure the flight program. Now we continue to work hard to fulfill our obligations to our customers, ”says Mikhail Kharchenko, Director of Antonov Airlines.

Recommended:
Minister of Infrastructure of Ukraine invites Azerbaijan to invest in transport projects
Rostec will launch the production of ultra-fast charging stations for electric vehicles
Scrap metal collection in Ukraine plummeted amid falling purchase prices
On this topic
"Antonov " intends to enter production of 12 An-178 aircraft per year from 2023 - President of the
Yuzhmash told whether it is possible to launch reusable rockets from the Black Sea
Metinvest, together with the Rinat Akhmetov and Vadim Novinskoy Foundations, donated 3,200 COVID-19
The Ukrainian "Ruslans" delivering supplies to combat coronavirus
Guide Dreamlifts Ltd decided not to renew the cooperation with the Antonov company
NATO expressed gratitude to the state enterprise "ANTONOV" for the work in the framework of SALIS
Add a comment
Сomments (0)
News Analytics
The capacity of the domestic steel market in Ukraine in January-March decreased19-04-2021, 10:33
In Russia, there is an exuberant demand for agricultural machinery19-04-2021, 10:24
Iran is satisfied with the reaction of the world community to 60% enrichment of18-04-2021, 13:24
Gas prices in Ukraine have reached a record value over the past two years -16-04-2021, 17:24
Ukrmetallurgprom asks the Antimonopoly Committee to allow Metinvest to bid for16-04-2021, 17:23
World Steel Association predicts a good year for metallurgists15-04-2021, 18:19
World Steel Association defines green steel and its variations12-04-2021, 13:14
China unlikely to cut steel capacity in 2021 due to high steel prices07-04-2021, 12:11
Scrap metal market at the beginning of April02-04-2021, 11:10
Rising Chinese Prices Fueled Rising Global Steel Prices - MEPS25-03-2021, 18:54
Sign in with: