The Kharkov plant "Electrotyazhmash" was visited by the Deputy Chairman of the Economic Development Committee of the Verkhovna Rada of Ukraine. 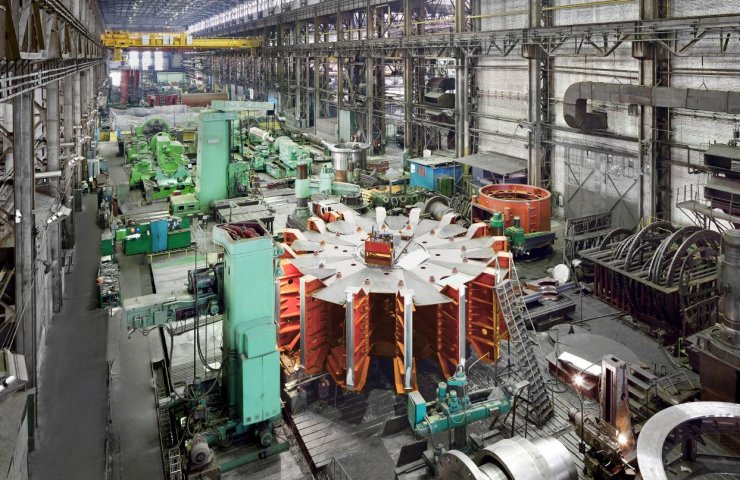 Today, with the assistance of the State Property Fund of Ukraine, the Electrotyazhmash plant has passed the most crisis period and is starting to recuperate: it paid off wage arrears, returns a portfolio of orders, finds working capital, and builds relationships with direct suppliers of raw materials. About this announced in the press service of the Kharkov enterprise.

They recalled that for the first time in 5 years, Electrotyazhmash is being certified by Ukrzaliznytsia to participate in the rolling stock renewal program.

“The Fund's policy to stabilize the state-owned enterprise is yielding results. The enterprise returns debts and begins to receive orders, but for the large-scale development of such enterprises as Electrotyazhmash, it is necessary to radically change the state approach to economic and industrial policy, ”said Dmytro Kisilevsky, People's Deputy, Deputy Chairman of the Verkhovna Rada of Ukraine Committee on Economic Development during a working meeting with the leadership of the state enterprise "Electrotyazhmash" on Thursday.

During the meeting, the activities of the plant and legislative initiatives aimed at improving the state of enterprises in the machine-building industry were discussed. In particular, the draft law on localization, aimed at creating preconditions for sustainable development and modernization of the domestic industry.

“Unlike our developed neighbors, we do not have the opportunity to“ fill ”our economy with money, but we can use public procurement, for which we annually spend almost 600 billion hryvnias of budgetary funds. Thus, we not only leave part of the funds in the state, but also create new jobs and preserve the existing ones here, in Ukraine. The return of common sense to economic. state policy should become the cornerstone of the government, parliament and Ukrainian diplomats, "Kisilevsky emphasizes.

Kharkiv State Enterprise "Electrotyazhmash" produces power engineering products, including turbogenerators and hydrogenerators, subject to the localization bill No. 3739, adopted by the Verkhovna Rada in the first reading on July 21, 2020.

Localization provides for the mandatory presence of a local component in public procurement, which are carried out for budgetary funds. We are talking about 5 categories of mechanical engineering: railway transport, public transport, municipal equipment, power engineering and civil aviation. The Ukrainian component in these goods will be required at the level of 10% in the first year, with a subsequent increase of 5% annually until it reaches 40%.

“Today mechanical engineering is in crisis. The deep absorption of the market by imported products, the protracted coronavirus crisis deprive Ukrainian manufacturers of orders, which in turn leads to production downtime, wage delays and massive layoffs, ”the MP emphasizes the seriousness of the situation.

According to Kisilevsky, Kharkiv Electrotyazhmash is one of the vivid examples of why Ukraine needs to introduce a number of industrial development tools as soon as possible, which will provide Ukrainian enterprises with jobs and Ukrainians with jobs.

Recommended:
Zaporizhstal plant has mastered a new type of hot-rolled steel with the addition of boron
The French agreed to localize 35% of the production of Alstom electric locomotives in Ukraine
The European Commission has not included nuclear energy in the list of "green" sources
On this topic
Новые правила ограничения сроков эксплуатации грузовых вагонов стали результатом уступок
Ukraine expects difficult negotiations on trade in metal products as part of the renewal of the
Yuzhmash told whether it is possible to launch reusable rockets from the Black Sea
The state property Fund of Ukraine plans this year to privatize "Turboatom"
MP Taruta said that Ukraine is in serious economic recession
Ukraine detensive the scrap metal market in the spring
Add a comment
Сomments (0)
News Analytics
Volodymyr Zelenskyy signed a law to extend the export duty on ferrous scrap16-05-2021, 09:29
China's Tianwen 1 spacecraft successfully landed on Mars15-05-2021, 12:56
British law enforcement officials accused Liberty Steel and GFG Alliance of15-05-2021, 12:03
Chip shortage will cost the global auto industry $ 110 billion in revenue in14-05-2021, 12:15
Zaporizhzhya Dneprospetsstal expands international partnership14-05-2021, 11:17
The current state of the market is ideal for the sale of rolled steel - IREPAS04-05-2021, 18:41
Global hydrogen demand to grow 7-fold by 2070 - PwC21-04-2021, 12:31
World Steel Association predicts a good year for metallurgists15-04-2021, 18:19
World Steel Association defines green steel and its variations12-04-2021, 13:14
China unlikely to cut steel capacity in 2021 due to high steel prices07-04-2021, 12:11
Sign in with: