Alexander Yaroslavskyi's metallurgical plant was reminded that if you bring friends and relatives to the DMZ, you can get a bonus from UAH 2550 to UAH 3500 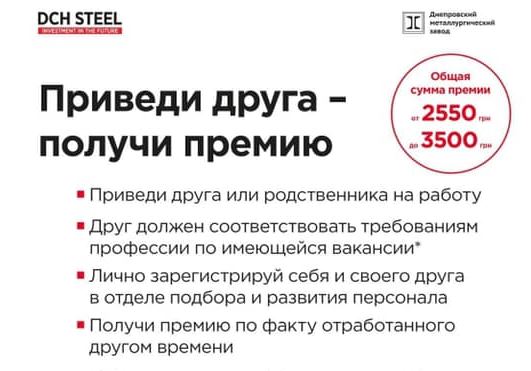 Dnipro Metallurgical Plant decided to continue the project of hiring new employees called "Bring a friend - get an award" in connection with its successful implementation. Recall that the DMZ of the DCH group of Alexander Yaroslavsky has been offering a bonus of up to 3500 hryvnia for the last two months for a new employee, whoever brings him to work.

“The project“ Bring a friend - get a prize ”continues to operate at the DMZ. More than 50% of new employees have recently found a job at the enterprise precisely for this promotion, "the plant said.

The list of vacancies is known to all employees of the plant. Now among the most relevant professions are blast furnace furnaces, hot rolling mill operators, crane drivers and diesel locomotive drivers, electricians, milling operators, and a number of other specialists.

For the first time, the program "Bring a friend - get an award" at a metallurgical plant in Dnipro was launched in 2017.

Recommended:
Dneprotyazhmash manufactures technological equipment for DMK
Energomashspetsstal accepted parts for the Turkish nuclear power plant
The first quarter of 2021 did not bring expected production growth to Ukrainian metallurgists
On this topic
The metallurgical plant of Alexander Yaroslavsky is carrying out the reconstruction of coke oven
At the Yaroslavsky metallurgical plant in the Dnieper began to pay for new workers
Dneprovskiy metallurgical plant has restarted another rolling mill
The Dnieper metallurgical plant launched blast furnace No. 2
The Dnieper metallurgical plant restarts steelmaking
Oleksandr Yaroslavsky, intends to invest in Ukrainian roads $ 300 million
Add a comment
Сomments (0)
News Analytics
Chip shortage will cost the global auto industry $ 110 billion in revenue in14-05-2021, 12:15
Zaporizhzhya Dneprospetsstal expands international partnership14-05-2021, 11:17
The coal industry relies on new technologies to survive in the decarbonization14-05-2021, 11:38
In January-April, Ukrainian metallurgists increased steel production by 7.2%14-05-2021, 10:03
Metinvest does not want to sell pig iron of Dnipro Metallurgical Plant to third14-05-2021, 09:03
The current state of the market is ideal for the sale of rolled steel - IREPAS04-05-2021, 18:41
Global hydrogen demand to grow 7-fold by 2070 - PwC21-04-2021, 12:31
World Steel Association predicts a good year for metallurgists15-04-2021, 18:19
World Steel Association defines green steel and its variations12-04-2021, 13:14
China unlikely to cut steel capacity in 2021 due to high steel prices07-04-2021, 12:11
Sign in with: