The ceremony of rolling out the first fuselage of the An-178-100P aircraft, which is manufactured for the needs of the Air Force of the Armed Forces of Ukraine, took place at the Antonov State Enterprise. 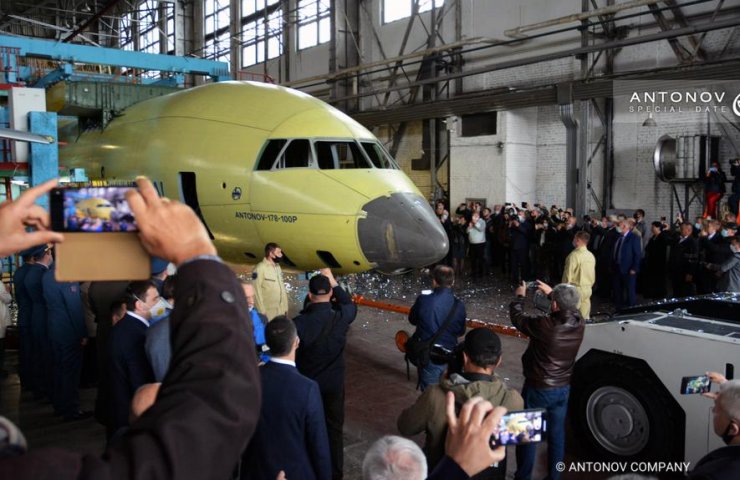 The state enterprise ANTONOV, which is part of Ukroboronprom, has completed the slipway assembly of the fuselage of the first of three An-178s, which are being built under a contract with the Ministry of Defense of Ukraine, prisoners December 29, 2020. The work was completed almost two weeks earlier than planned.

“Today is an important day for all of us. Less than five months have passed since the day when in this workshop, with the assistance and in the presence of the President of Ukraine, a contract was signed with the Ministry of Defense for the construction of three An-178 aircraft. And now we are attending an event that confirms that ANTONOV works, lives and will live, "said Sergei Bychkov, head of ANTONOV State Enterprise, in his opening speech.

Now in the aggregate workshops of the enterprise, the manufacture of the wing, tail unit, elements of systems and parts, which will subsequently be needed for the final assembly of the airframe of the first An-178, continues. This stage is planned to be completed by the end of this year.

At the same time, the production of parts and assemblies for the second and third aircraft has begun. Contracts for the supply of materials and components are concluded with Ukrainian and foreign partners.

The new An-178-100P is an improved version of the An-178 aircraft platform, designed to replace the outdated An-12 and An-26 military transport aircraft. The new medium military transport aircraft offers a combination of reliable performance and low operating costs. An-178-100P offers the following highlights, like maximum cruising speed up to 825 km /h and maximum flight range up to 4200 km.

The new aircraft is designed for fast and efficient transportation of cargo and troops. With a maximum payload of up to 18 tons and a volume of 167 m 3 (without a loading ramp 122 m 3 ), the An-178-100P can carry numerous bulky cargo, including vehicles. In the military version, the An-178-100P can accommodate up to 90 soldiers or 70 paratroopers. The cargo compartment also provides configurations for the transport of the wounded or sick (48 wounded on stretchers + 15 seated or 8 medical modules).

Финансовая аналитика, прогнозы цен на сталь, железную руду, уголь и другие сырьевые товары. More news and analytics on Metallurgprom telegram channel - subscribe to get up-to-date market information and price forecasts faster than others.
Сomments
Add a comment
Сomments (0)
On this topic
Elon Musk contracted coronavirus, but doubts the reliability of the tests
"Metinvest " with affiliated companies became the owner of 100% of "Zaporozhogneupor
"Antonov " intends to enter production of 12 An-178 aircraft per year from 2023 -
The Ukraine-EU summit may be postponed again - the head of the European Commission went into
Vodafone, DTEK and Ericsson announce the start of the Smart Factory project based on 5G
Ukrainian industrialists to talk about the benefits of Industry 4.0 at Trans4mation week online
Recommended:
Ukraine and the United States announced cooperation in the field of small modular nuclear reactors
Mining enterprises of Ukraine reduced the export of iron ore by 38.9%
Volvo starts deliveries of electric trucks made of fossil-free steel
News Analytics
China's iron ore output to rise in 2023 as new projects are launched30-11-2022, 18:10
"Centravis" agreed to supply a new batch of seamless pipes to a30-11-2022, 16:51
Metinvest enterprises in Ukraine resumed work after massive shelling of29-11-2022, 11:59
The European Council added the violation of restrictive measures (sanctions) to28-11-2022, 14:22
The abolition of export duty in India may reduce the price of Turkish steel28-11-2022, 14:07
Commodity prices will fall, metals quotes will rise slightly - Focus Economics28-11-2022, 13:28
Platinum market to face shortage next year - WPIC22-11-2022, 18:25
Global steel demand falls and will fall by 2.3% in 2022: WorldSteel19-10-2022, 23:12
Iron ore prices fall to 11-month low15-10-2022, 10:36
China production cuts in winter will give limited boost to steel markets -15-09-2022, 10:09
Sign in with: