The total mass of blanks for reactor equipment parts for the fifth and sixth units of the largest nuclear power plant in India is 267 tons. 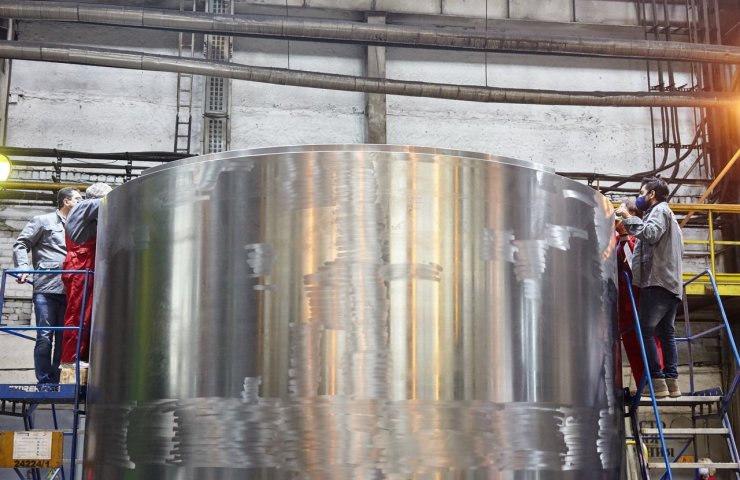 PJSC Energomashspetsstal was visited by the inspector of the Indian Atomic Energy Corporation (ICAEL) Malik Rohet. The main purpose of the visit was the acceptance and testing of blanks for reactor equipment parts for Units V and VI of the Kudankulam NPP (India). Acceptance inspection took place at the production site of PJSC "EMSS" from June 7 to 11.

In the presence of the IKAEL inspector and other specialists of the nuclear industry, 7 large-tonnage blanks for the steam generator and the reactor vessel of Units V and VI of the Kudankulam NPP were successfully tested. Based on the results of the tests and inspections, the customer's representative was finally handed over three shells and an allowance, an intermediate inspection of the bottom, shell and allowance was carried out. All parameters and characteristics of the products correspond to the technical requirements of the customer. Shipment of large-capacity products is scheduled for the end of the month. The total weight of the batch is 267 tons.

NPP "Kudankulam" is a nuclear power plant under construction in India, located in the south of the Indian state of Tamil Nadu. The first and second blocks of the Kudankulam NPP are already in operation, the third and fourth are under construction, and the fifth and sixth are undergoing preparatory work. The planned date for the start of guaranteed operation of power units NN3-4 is 2023 and 2024. During SPIEF-2017, a general framework agreement was signed for the construction of Stage III (units NN5-6).

NPP "Kudankulam" is being built in India within the framework of a bilateral agreement between Russia and India dated November 20, 1988 and an addendum to it dated June 21, 1998. In 2002, construction began on the first two power units with VVER-1000 reactors with a total capacity 2000 MW.

Финансовая аналитика, прогнозы цен на сталь, железную руду, уголь и другие сырьевые товары. More news and analytics on Metallurgprom telegram channel - subscribe to get up-to-date market information and price forecasts faster than others.
Сomments
Add a comment
Сomments (0)
On this topic
STEAM Camp educational project for teachers of exact sciences completed in Zaporozhye
EMSS tells visitors about nowych technologies
The Ukraine-EU summit may be postponed again - the head of the European Commission went into
ArcelorMittal and Nippon Steel complete acquisition of Essar Steel
Ukrainian company has developed special wheels for Indian railways
"Metinvest " with affiliated companies became the owner of 100% of "Zaporozhogneupor
Recommended:
Steelmakers are exploring the use of hydrogen for energy-intensive processes
Ukrainian court invalidated sale of Ferrexpo Plc shares in 2002
Minister of Energy of Kazakhstan visited ArcelorMittal Temirtau
News Analytics
The production of passenger cars in Russia decreased by 2.8 times in eight29-09-2022, 11:19
Donetsk and Torez electrotechnical plants will start producing electrical29-09-2022, 11:37
Ukrainian coking plants reduced gross coke production by 55.2%29-09-2022, 11:28
China ramps up investment in transport to bolster economy29-09-2022, 11:33
The heads of mining companies named the main risks for business29-09-2022, 10:03
China production cuts in winter will give limited boost to steel markets -15-09-2022, 10:09
Steel prices may rise as manufacturers stop production11-09-2022, 14:06
IREPAS: The global long products market is in a "dramatic situation"10-09-2022, 20:49
Steel prices are unlikely to rise significantly in the near future - analysts02-09-2022, 22:58
Steel prices may move up on new data from China31-08-2022, 12:19
Sign in with: