On Monday, the first batch of two power units at the Baihetan hydropower plant in southwestern China, the second in the world in terms of total installed capacity, was officially commissioned. 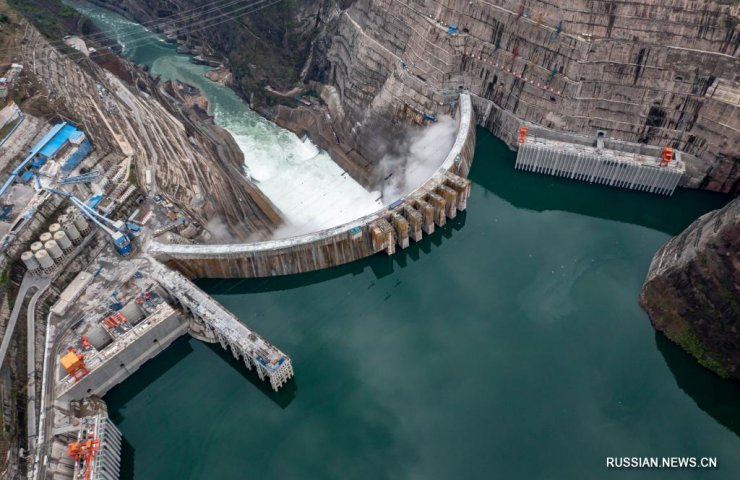 The first two 1 gigawatt (GW) turbines began operation after three days of testing. Ultimately, the project will consist of 16 such units, making its total generating capacity second only to the Three Gorges hydroelectric power plant.

The Baykhetan HPP is part of a cascade of dams on the Jinsha River, which is located in the upper reaches of the Yangtze. It is one of China's largest and most complex engineering projects, with a 289-meter high dam that took only four years to build.

As a major project in China's west-to-east transmission program, Baihetan is the largest and most technically complex hydropower project currently under construction in the world, said Chinese President Xi Jinping, adding that the project has become a major project. a breakthrough in the production of high quality equipment in China.

The project is part of a national scheme for generating electricity and delivering it to the high-energy regions on the east coast, and is also aimed at strengthening control over water flows during severe summer floods.

Provinces in eastern and central China with large populations and more developed economies have always experienced power shortages during periods of peak demand, and regions that previously relied on coal to generate electricity are struggling to find clean energy sources, mainly from regions of western China to stimulate their economy amid pressure from the central government to achieve climate change goals.

In its latest five-year plan, covering the period 2021-2025, Sichuan is aiming to complete 10 hydropower projects and begin construction on seven more.

Environmentalists have repeatedly criticized the large-scale construction of a dam on the Yangtze River and its tributaries for fears that over-engineering of the river has destroyed major habitats and damaged natural floodplains.

Финансовая аналитика, прогнозы цен на сталь, железную руду, уголь и другие сырьевые товары. More news and analytics on Metallurgprom telegram channel - subscribe to get up-to-date market information and price forecasts faster than others.
Сomments
Add a comment
Сomments (0)
On this topic
Belarus starts negotiations with China on investment and trade
French Total took control of 6 Ukrainian solar power plants
Iran is satisfied with the reaction of the world community to 60% enrichment of uranium
Ukraine accepted the offer of the Mask on the free ventilators
Bosch launches automotive chip plant in Dresden
US imposed export restrictions against Ukraine, Russia, Venezuela and China
Recommended:
Ferroalloy enterprises of Ukraine in total reduced output by 27.6%
EU plans additional sanctions against Russian metallurgy
Ukrainian coking plants reduced gross coke production by 55.2%
News Analytics
British Steel owner asks government for financial support05-10-2022, 13:05
The price of gold crossed the mark of 1700 dollars05-10-2022, 13:28
US coal prices top $20004-10-2022, 10:16
Tata Steel merger plan to secure long-term profits03-10-2022, 10:46
US hydrogen prices to drop to zero dollars per kg in 5 to 6 years: Platts02-10-2022, 21:53
China production cuts in winter will give limited boost to steel markets -15-09-2022, 10:09
Steel prices may rise as manufacturers stop production11-09-2022, 14:06
IREPAS: The global long products market is in a "dramatic situation"10-09-2022, 20:49
Steel prices are unlikely to rise significantly in the near future - analysts02-09-2022, 22:58
Steel prices may move up on new data from China31-08-2022, 12:19
Sign in with: